Many state legislators, like the President and 36 state governors, are term-limited. But what effects do these limits have on the way state legislators govern? In new research which examines legislative oversight by term-limited state representatives, Mona Vakilifathi argues that term limits motivate legislators to make laws which tie the hands of state bureaucrats to implement policies in line with legislators’ policy goals.

Legislative term limits are frequently discussed as both a solution and a problem in US national and state politics. In October 2016, then presidential candidate Donald Trump made a pledge to propose a constitutional amendment to enact legislative term limits for House Representatives and Senators in Congress. According to his Contract with the American Voter, the enactment of term limits will reduce corruption and special interest group capture. Speaker Paul Ryan publicly supported legislative term limits in November 2016 but Congress has not taken any action on the issue since.

In September 2017, the Michigan Chamber of Commerce announced it is considering a constitutional amendment to modify Michigan’s legislative term limits laws through the initiative process in the fall 2018 state election. With a two-term limit for state Representatives and three-term limit for state Senators, according to The Detroit News and MLive, the Michigan legislature will be subject to the highest state legislator turnover in the United States after the 2018 election: seventy percent of Michigan state Senators and twenty percent of Michigan state Representatives will be termed-out of their current positions in 2019. The initiative generally intends to address the expected turnover and other reported negative effects of term limits on lawmaking.

Past research demonstrates the negative effect of legislative term limits on state legislators’ engagement in lawmaking and bureaucratic oversight. Term-limited legislators are less likely to enact complex legislation or engage in bureaucratic oversight activities, such as committee hearings or audits, than their counterparts in other state legislatures without term-limits. However, other research has shown that state agency leaders report term-limited legislators as more influential in the lawmaking process than their counterparts. How do we make sense of these conflicting findings?

By Steve & Christine from USA CC BY 2.0, via Wikimedia Commons

I measure statutory discretion by counting the number of mandatory words added to a state’s charter school authorization, renewal, and revocation statutes. I collected more than 6,500 sentences on this topic across forty-two states with charter school laws from 1991 to 2013. I then used automated text analysis to code whether or not the sentence had an optional or mandatory phrase. An optional phrase authorizes the subject of a statutory sentence to execute a procedure whereas a mandatory phrase legally requires the subject to execute a procedure. I then looked at the relationship between this measure of statutory discretion with two measures of legislative term limits. 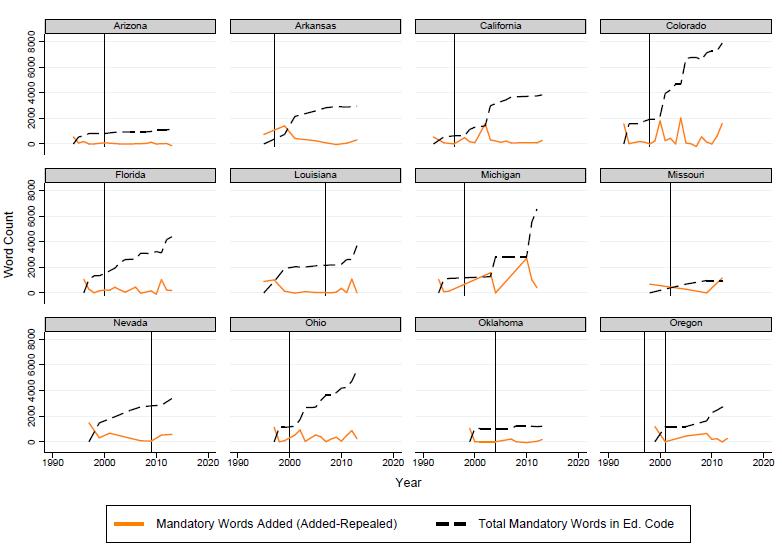 My results suggest that President Trump, or any president or governor, should be careful what he wishes for when he campaigns for legislative term limits. The enactment of legislative term limits motivates legislators to grant less statutory discretion to the bureaucracy than their counterparts. A decrease in statutory discretion limits the executive’s control over the bureaucracy’s policy implementation. A short-sighted legislator binds the bureaucracy, and indirectly the executive, long after the legislator is termed out of his or her seat.