Last week saw President Trump promote the rhetoric of the far-right Britain First organization, which prompted an angry response from the UK’s Prime Minister, Theresa May. Ben Margulies writes that the transatlantic Twitter spat shows that Trump’s appeal to populism and anti-elitism may also draw it against the liberal world order that the US-UK Special Relationship exemplifies.

At this stage, there seems to be little more to say about why Donald Trump makes an inflammatory use of Twitter. From his attacks on NFL players and ESPN commentators to how now especially infamous retweets of Britain First videos, President Trump clearly uses the social network to advance a radical-right populist, ethno-nationalist worldview. There’s an enemy. It’s not white. The elites won’t tell you the truth about them, but I will. Rinse and repeat.

It would seem axiomatic that Trump’s chauvinism and aggressive nationalism would be the greatest threat to continuity in American foreign policy. However, it may actually be anti-elitism that ends up undermining the Special Relationship. Ultimately, foreign policy, and the established channels through which it flows, are elite matters, handled by professionals in arenas removed from electoral politics. In Wolfgang Streeck’s criticisms of European political economy, he pointed out that the European Union converts much of political life into foreign policy, which is usually conducted secretively, by the executive branch, with little popular input. The US is not part of any supranational entity like the EU, but American foreign policy is not much less insulated from popular politics. The Constitution vests foreign relations in the presidency precisely because it can act with “secrecy” and “dispatch,” as John Jay wrote in Federalist Paper No. 64. 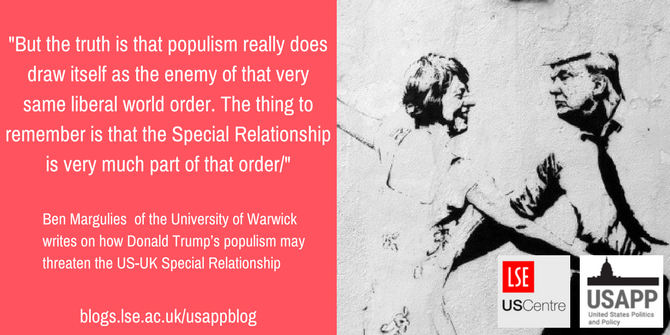