Partisanship was not the only factor in how Obamacare exchanges were adopted by the states.

Partisanship was not the only factor in how Obamacare exchanges were adopted by the states.

Following the passage of the Affordable Care Act in 2010, many US states adopted their own Obamacare health insurance exchanges, many did not, and some opted for partial administration. In new research, Shihyun Noh argues that states were more likely to run health insurance exchanges in partnership with the federal government when they received financial incentives, had fewer state health personnel, and had divided government.

The Patient Protection and Affordable Care Act (ACA), commonly called Obamacare, is a landmark piece of health care legislation in the US. While the ACA includes provisions to contain health care expenditures and improve the quality of care, its primary goal is to reduce the number of uninsured people. Before the enactment of the ACA, about one out of six Americans did not have insurance. Now, only one out of ten Americans is reported to have no insurance. Without health insurance, patients cannot receive essential health care services and may be in danger of filing for bankruptcy due to tremendous medical expenses.

Health insurance exchanges under the ACA, are one of the two pillars, along with the expansion of Medicaid, that are aimed at increasing health insurance coverage. The exchanges are marketplaces for individuals and small businesses to buy a plan from competing plans which meet federal requirements for benefits and other features. Through the exchanges, eligible consumers can receive income-based federal subsidies to pay for the coverage when they purchase insurance options.

Importantly, the passage of ACA in 2010 was dominated by political partisanship; it was the first time that comprehensive health legislation passed with single-party support, which influenced the stage of policy implementation. Federal and state governments share this responsibility of implementing the ACA health exchanges. While the federal government set specific requirements for the exchanges, the Act granted states considerable discretion over their implementation. Under the law as passed, states had two options: 1) they could establish their own exchanges or 2) they could leave the task to the federal government. As reported, the initial implementation of state exchanges happened on politically polarized lines. States with a Republican governor or a Republican dominated state legislature did not move toward creating their own exchanges.

This was attractive to the states because, by taking part in administering a federal exchange, they were able protect their administrative interests, without taking the burden of creating their own exchange. Those states that decide to opt for a partial administration can certify and recertify a plan as a qualified health plan or can assist their residents in finding insurance options, which is associated with protecting their existing responsibility for the health insurance industry in their boundaries. Responding to this federal strategy of allowing partial administration, among the thirty-six resistant states, seventeen states chose to take part in administering the exchanges. But the other nineteen states left the creation and administration of the exchanges to the federal government. 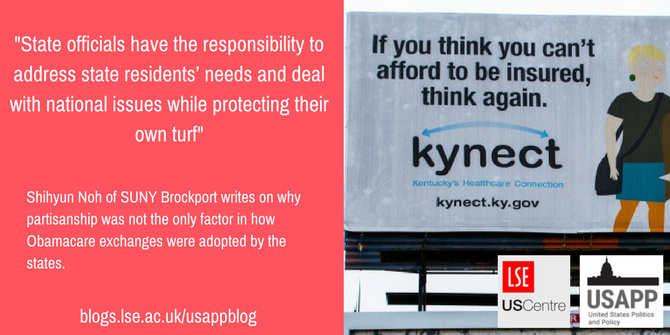 “Once upon a time” by Don Sniegowski is licensed under CC BY NC SA 2.0

What led to state participation in health insurance exchanges?

Why did some resistant states take part in the exchanges while others did not? My research suggests that state participation in the exchanges was associated with financial incentives from the federal government, levels of state personnel capacity, and divided government.

Second, states with lower levels of state personnel related to health policy chose to take part in administering the exchanges. The US states suffered from severe financial constraints in the wake of the Great Recession of the late 2000s, slashing approximately twenty percent of their public health workforces at the state level. Those states with fewer health-related public personnel may have chosen to take part in the exchanges for additional financial incentives from the federal government. Among the seventeen states that decided to opt for partial administration, ten states received additional funds from the federal government.

State officials have the responsibility to address state residents’ needs and deal with national issues while protecting their own turf. Thus, state implementation of federal programs is a multidimensional story of politics and administration, not wholly determined by political partisanship. Faced with resistant states, the federal government negotiated with them for the partial administration of the federal exchanges in their boundaries, rather than newly establishing their own. In responding to this federal strategy, state officials considered internal and external inducements and constraints including state personnel capacity and financial incentives from the federal government. They were also able to more practically respond to it, when their state had divided government.

Shihyun Noh – SUNY Brockport
Shihyun Noh is an assistant professor in the Department of Public Administration at the College of Brockport at the State University of New York. His primary areas of interest are health policy and administration, intergovernmental implementation, and state and local government. His related work has been published in Publius: The Journal of Federalism, State and Local Government Review, and an edited book titled Intergovernmental Relations in Transition: Reflections and Directions.