Last week, the US Attorney General, Jeff Sessions, announced that he would be revoking Obama-era Department of Justice guidance which left the enforcement of marijuana policy to the states by giving prosecutors more discretion to pursue marijuana cases. A. Lee Hannah and Daniel J. Mallinson write that Sessions’ policy about-face draws opposition from many of those in his own party, state US attorneys, interest groups, and state legislatures. Given that the federal government is dependent on state and local law enforcement for implementing drug prohibition, this opposition could well push Congress to change federal marijuana law.

In our recent article and post for this blog, we described state medical marijuana policies as defiant innovations – a process whereby states, through ballot initiatives or the legislature, pass laws that not only circumvent, but also reimagine, federal law. We also questioned whether newer policies really are as “defiant” as their predecessors’. With attitudes shifting in favor of legalizing marijuana use, including a now majority of Republicans, and legalized recreational marijuana in eight states and D.C., it’s reasonable to assume that the train has left the station on stopping state marijuana efforts. Or at minimum, medical marijuana policies would draw little federal attention.

But we also hedged our bets in the paper:

[T]he election of Donald Trump, and particular the confirmation of Senator Jeff Sessions as Attorney General, demonstrates that even as the federal government’s view loses legitimacy, state action today is not less defiant. It remains to be seen whether the Trump administration will enhance domestic interdiction efforts, but the appointment of Jeff Sessions will put in place an Attorney General that is a staunch opponent of drug legalization. (p. 16)

The Attorney General’s January 4 memo confirms our suspicions and perhaps raises the stakes on future state defiance. The memo in practice rescinds “previous guidance documents” related to marijuana enforcement. The primary memos being rescinded are the 2009 Ogden Memo and two memos written by Deputy AG James Cole in 2011 and 2013 (Figure 1). Sessions’ memo contradicts candidate Trump’s position and Sessions’ own promises, at least according to Republican Colorado Senator Cory Gardner. By rescinding these memos, Sessions has given prosecutors more discretion to pursue marijuana-related cases; but this is not a full-fledged order to enforce all federal marijuana laws. As the memo states, “[T]his return to the rule of law is also a return of trust and local control to federal prosecutors…” That language might be enough to provide prosecutors the latitude they need to respond in a way consistent with local preferences. 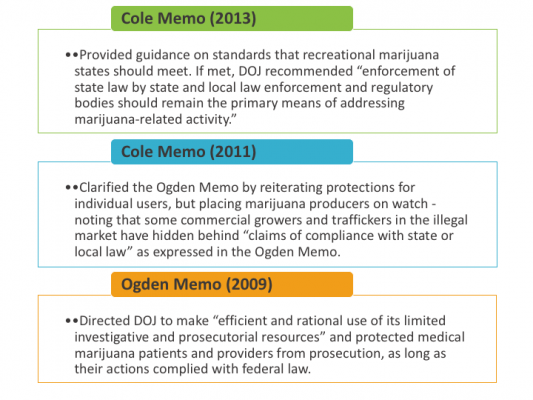 Yet there were some signs that Sessions was moving in this direction before his announcement on January 4. In September, the House Rules Committee blocked a floor vote on the Rohrabacher-Blumenauer Amendment – a budget rider that prevents DOJ from going after states that have legalized medical marijuana (its status is still uncertain at this time). 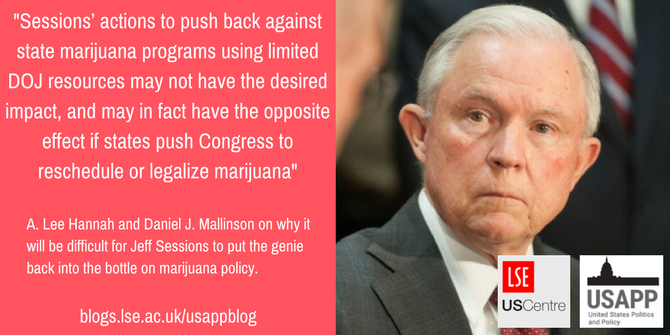 There are four key players to watch in the coming weeks. First off, the Attorney General is currently under fire from multiple directions. Will he have the political capital to hold his ground on a memo that even has some influential Republicans up in arms?  Second, how will US Attorneys respond to this new directive in medical and recreational marijuana states?  Early statements from US Attorneys in states that have most recently adopted medical marijuana (Pennsylvania and Ohio) appear to be confident that their states’ medical marijuana programs will move forward. US Attorneys in recreational states (Colorado, Oregon, and Washington) have responded with caution. It is unclear how they will implement the memo, including interim Attorneys appointed by Sessions and confirmed appointments of President Trump. Third, Congress may be forced to act more decisively on marijuana. Such action could range from placing boundaries on Department of Justice (DOJ) enforcement of the Controlled Substances Act, to reforming the scheduling of marijuana, and could be pushed by officials from marijuana states. Fourth, we anticipate that interest groups and their members will push back on this measure. As James Higdon of Politico notes:

The fact that marijuana has now risen to the height of top-tier budget negotiations is a sign that the pro-marijuana coalition is no longer merely a menagerie of loud-mouth hippies, stoners, and felons, as the pro-pot crowd has been characterized in the past. The community of Americans who now rely on legal medical marijuana, estimated to be 2.6 million people in 2016, includes a variety of mainstream constituency groups like veterans, senior citizens, cancer survivors, and parents of epileptic children.

The question remains, how will states respond?

The earliest signals from the states indicate that Sessions’ warning has not slowed the implementation of recreational marijuana in California, nor did it delay Vermont’s legislature from sending a recreational marijuana bill to the governor’s desk. We anticipate that the same factors that led to liberalizing marijuana policies will be at hand in state decisions to adopt or reject medical marijuana. That is, states that passed these laws enthusiastically and that have strong leadership in place are likely to remain defiant [see reactions from California, Colorado, Washington]. But Sessions’ memo might provide enough cover for reluctant adopters like Ohio to delay or water down implementation of their own programs.

The fact remains, however, that the federal government is dependent on state and local law enforcement for implementing drug prohibition, and thus can be undermined by state refusal to use their resources for that purpose. The now-repealed Ogden Memo admitted as much regarding use of the Department’s scarce resources. Thus, Sessions’ actions to push back against state marijuana programs using limited DOJ resources may not have the desired impact, and may in fact have the opposite effect if states push Congress to reschedule or legalize marijuana. In fact, Sessions may push together a bipartisan coalition of liberals supportive of marijuana availability and conservatives chafed by action that contradicts their small government principals.