Americans are increasingly divided when it comes to politics.   In Congress, there are virtually no liberal Republicans or conservative Democrats and very few moderates.   Among the public, Americans have become more sorted, with less overlap between those holding liberal or conservative positions on a variety of issues.   Furthermore, there is growing animosity between supporters of each party as self-identified Republicans and Democrats increasingly dislike and disapprove of partisans in the other party.   Although some scholars quibble about how to characterize or even name these trends, it is clear that something has changed in recent decades, and politics is being increasingly waged on partisan terms and in acrimonious ways.

At the same time, over the last two decades, there has been a marked increase in political advertising–the most visible form of political discourse for most Americans.  And, not only has the volume of advertising increased, but the tone has turned more negative.  Is it possible that these two parallel trends are related? Have well-documented changes in ad tone and volume over the last 20 years caused or contributed to the well-documented increases in sorting or polarization?

Indeed, there is mounting evidence that people are moving to news sources most likely to be friendly to their own points of view.  Some have suggested that the echo chambers of social media specifically and online communication more generally may have contributed to polarization.  Others have pushed back on this claim, and some have suggested that if any medium is responsible it is television.  Little research, however, has examined specifically how electoral campaigning may have contributed to sorting and affective polarization in spite of there being several strong reasons to believe that campaign appeals could influence how viewers assess politics and politicians.  For one, exposure to a barrage of advertising may make partisanship more salient and, as a consequence, partisans may be more likely to adopt views consistent with their party.  Moreover, being bombarded with advertisements might help people learn what the parties stand for, allowing them to find the “best” party and thus become better sorted.

From a research design perspective, establishing a link between two trends is difficult; any two trends could be explained by a variety of factors and not linked as cause and effect. Fortunately, however, there is a way for us to gain some leverage on the question of whether there is a link between the tone and volume of advertising, on the one hand, and levels of mass polarization and sorting, on the other hand. Namely, because most political advertising is purchased at the level of the media market (which is a collection of counties that receive the same broadcast television signal; there are 210 across the United States), there is both substantial geographic variation in the volume and tone of advertising to which people are exposed during a campaign.  This allows us to compare variations in ad volume and tone with variations in survey responses to questions tapping polarization.

“Dead Air” by smokeghost is licensed under CC BY NC SA 2.0

We utilize two data sources in our research.   We draw on data from a Pew Research Center survey fielded January 23 through March 16, 2014.  We use this survey for several reasons. First, the sample size is quite large (over 10,000), which provides a considerable number of respondents from each media market and gives us sufficient statistical power to both identify even small effects and to examine specific populations. Second, the Pew study was designed with the express purpose of studying polarization, and thus questions tapping different aspects of polarization—including affective and issue polarization—are present.  For our key independent variables, we use data from the Wisconsin Advertising Project and the Wesleyan Media Project’s collections, spanning the period from 1998 to 2012.

The advertising data allow us to examine the link between advertising and sorting, focusing on both the impact of recent ad exposure (in the most recent campaign) and cumulative ad exposure across several election cycles.  We created several measures at the media market level, including the total volume of advertising and the total volume of negative and contrast advertising.  Our measures included both presidential and federal (US Senate and US House) ads aired by or on behalf of the two major party candidates.  One measure contains only advertising aired in 2012, while the other contains ads aired between 1998 and 2012.  We show the distribution of ads by media market in Figure 1 below.  Clearly, there is much variation across media market in the volume of advertising.

No evidence of a link between ads and polarization

Our analysis found no evidence to support the hypothesis that political ads and polarization are linked.  This was true whether we examined just that advertising that aired in 2012 (the federal campaign immediately prior to when the survey was in the field) or whether we included all advertising that aired between 1998 and 2012 (a test of a more cumulative effect of political ad exposure). Furthermore, we examined whether greater volumes of negative and contrast advertising, which are more likely to highlight party differences, would similarly result in greater polarization. We found no evidence in favor of this hypothesis either, as greater volumes of negative and contrast advertising were associated in some of our models with less sorting and less affective polarization.  Similarly, when we broke down the analysis by the partisanship of the respondent and the party being endorsed by the ad, we found few significant relationships.  Our evidence then makes it difficult (to say the least) to “blame” advertising for recent political polarization in the United States.

Maybe this should not be too much of a surprise, however, given that most political ads in the United States are candidate focused, and do not often explicitly mention a political party. In 2012, for instance, only about 11 percent of Senate ad airings and 12 percent of House airings mentioned a party label, and ideological (liberal or conservative) and party mentions in congressional general election advertising from 2006 through 2014 have never exceeded 17 percent and have been as low as 5 percent of all advertising. Thus, the assumption that television advertising heightens the importance of one’s partisanship seems less certain in the face of evidence about advertising content.

There is no consensus between academics on the cause of partisan polarization and sorting.  But there is no shortage of possible culprits, either.  Whether it be gerrymandering, cable television, or changes in campaign finance, advocates for a certain cause generally start by noting the commonality in a trend: gerrymandering became more contested just as polarization among elites became more evident.  Does the former cause the latter?  Cable news proliferated at the same time as well.  And so on.  We look at the increase in campaign ads and negativity and look for evidence suggestive of a relationship with measures of polarization.  We find little to support the link.  Indeed, in our work we tend to be more bullish on the effects of ads, finding evidence that they contribute to political knowledge and interest.  In line with that work, we are comfortable absolving 30-second campaign ads from the line-up of suspects in the hunt for the causes of polarization. 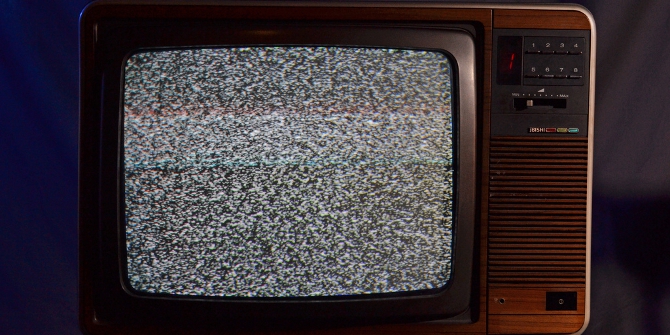 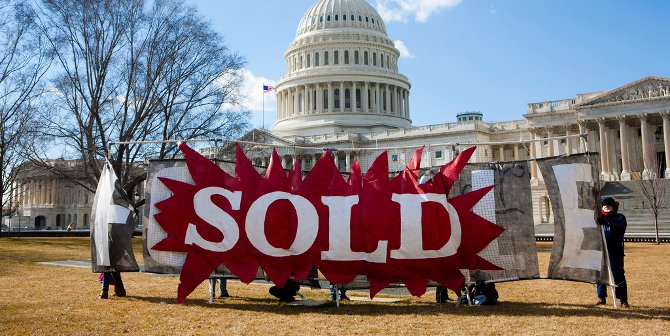