Why do lawmakers shutdown the government? Evidence from California shows we should ‘follow the money.’

Why do lawmakers shutdown the government? Evidence from California shows we should ‘follow the money.’

The US government has shut down three times since 2013, with two of those budget impasses falling in the last two months. But given the political risks inherent in not funding the government, why would lawmakers choose to cause a shutdown? In new research which examines California’s many state government shutdowns in the 1980s through the 2000s, Stan Oklobdzija finds that Republican legislators on the far right of their party saw their campaign contributions increase by as much as 40 percent in the final week of a shutdown. For these hyper-partisan lawmakers, he writes, shutdowns can be a real boon for fundraising.

While some policy goal usually lies on the other end of the shutdown rainbow—such as immigration reform for Congressional Democrats in 2018 or repeal of the Affordable Care Act for Republicans in 2013—using the wholesale closure of the US government as leverage for some legislative objective seems an unduly risky strategy for a lawmaker. Given the cost to taxpayers, the damage to the overall economy and their unpopularity with voters, why would an elected official, themselves driven by the desire to remain in office above all else and charged with stewardship of government by their constituents ever pursue such a risky and ruinous tactic?

That answer may be found by turning away from the US Congress, who have shut the government down just 8 times since 1980, to America’s most populous state—California. The Golden State, home to the most professional legislature in the United States, experienced perennial government shutdowns before an initiative in 2010 reformed the state’s budgeting laws. Far from the rare occurrence as they are federally, the California Legislature missed the state’s constitutional deadline for passing a budget in all but one year between 1986 and 2010. This triggered fiscal crises that in some years lead to state employees being paid in IOU’s and still others being furloughed in desperate cost savings attempts. Like the federal government shutdowns, these budget crises in California also had tremendous financial repercussions for the state—spooking credit agencies and making it more expensive for the state to borrow money.

Most importantly, however, California’s state legislature was, and remains, a highly polarized decision making body. In addition, except for a few rare sessions, Democrats normally retained control of both of California’s legislative bodies—the state Assembly and the state Senate. This meant that Republicans were mostly unable to get bills out of the legislature and to the Governor’s desk for a signature even in years when California’s Governor was a Republican. However, California Republicans still had an ace in the hole—the state’s constitution previously required a 2/3 super-majority in both legislative chambers to sign-off on a budget. That meant Republicans, who lacked the numbers to pass their own legislation, could still block passage of the state budget as Democrats needed to woo some of the opposite party to their side in order to clear that vote threshold. As the California Constitution requires a budget to be in place by June 15, the lack of a finalized budget by the start of the state’s fiscal year on July 1 has often caused payments for some services to immediately cease. 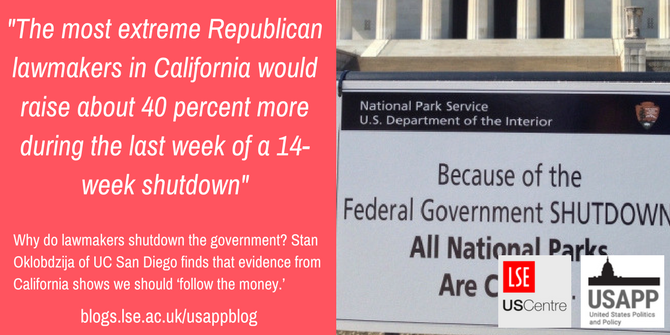 “Lincoln Memorial during the Government Shutdown [explored]” by John Sonderman is licensed under CC BY NC 2.0

Republicans, the minority party, were in an interesting position. While they couldn’t demonstrate value to their constituents with new pieces of legislation, (“credit claiming” as it was termed by Yale political scientist David Mayhew in his influential work “Congress: The Electoral Connection”), they could do so by blocking a budget drafted by the opposing party. As Congressional scholars Thomas Mann and Norm Ornstein noted in their aptly titled treatise “It’s Even Worse than It Looks,” obstructionism has gained a new cachet in legislative politics at the federal level. While a majority of voters might abhor such extremist tactics as shutting down the government, the most hyper-partisan members of a minority party’s base—who are coincidentally the most active voters—not only approve of, but rewarded such behavior.

Studying fundraising data in California, I found that Republican extremists in the California legislature increased their daily fundraising hauls for each week California went without a budget. For some lawmakers, this equated to a massive campaign cash haul. The most extreme Republican lawmakers in California would raise about 40 percent more during the last week of a 14-week shutdown, such as the one that occurred in 2010. A lawmaker whose party’s status in a legislative chamber confined them to obscurity for the majority of the year suddenly gained new standing as they could make up for their previous dearth of fundraising during the relative abundance that a budget stalemate provided.

Viewed in this light, the impulse to force a government shutdown becomes suddenly more rational. Though one should not view a lawmaker’s motive as purely financial, the increase in donations is a good measure of increased support by the most active and engaged elements of one’s base. These hyper-partisans follow politics more closely, participate in the political process more directly and are more apt to donate money. Perhaps most importantly, these hyper-partisans vote with a higher propensity than the average citizen. Thus, it may be strategically beneficial to cater to these individuals at the expense of others given that their support might help a lawmaker retain office better than having the support of more casual participants in the political process.

There are some important caveats when trying to generalize California’s experience to the federal government. First, party control of the legislative branch is a foregone conclusion in the Golden State. Unlike Congressional Democrats in 2018, Republicans in California had no real chance at winning control of either house of the California legislature during the 10-year period I studied. The fact that Republicans had essentially no hope of winning a majority likely made ingratiating themselves to the moderate voters one needs to flip a district a less appealing strategy. Further, while California’s shutdowns were usually resolved by a few Republican voters defecting from their party, (famously, state Sen. Abel Maldonado provided a key vote in 2009 in exchange for Senate Democrats putting an initiative for a top-two primary on the ballot), Democrats in Washington D.C. were a lot less unified on the issue of the Deferred Action for Childhood Arrivals program at the heart of the January 2018 shutdown.

Still, California’s decades of government shutdowns provide an opportune window into viewing the motivations of elected officials who must balance their duties as stewards of government with their own, more venal, reelection goals. That extremist behavior such as closing down essential government services in California was rewarded with an increase in fundraising hauls is both telling and troubling. As lawmakers are required to amass greater and greater campaign war-chests to run competitive electoral campaigns, will bending to the preferences of activist donors who prefer gridlock to compromise invite further obstructionism by members of the minority party? California’s experience may be but a preview of what happens to a legislative body when the incentives to govern become fundamentally misaligned with the incentives to raise campaign cash.

Stan Oklobdzija – UC San Diego
Stan Oklobdzija is a PhD candidate in the Department of Political Science at UC San Diego. His dissertation project–“Dark Parties”–details how changes in American campaign finance law allowed interest group networks to co-opt and overtake duties previously reserved by political parties. He was a Google Fellow at the Sunlight Foundation in 2014 and prior to graduate school, worked as a reporter at the Sacramento Bee.