The shooting at Marjory Stoneman Douglas High School last month has put the issue of gun control back on to the public and political agendas in the US. In light of this latest mass shooting, Alexandra Filindra and Loren Collingwood look at the relationship between the public’s response to such events and their attitudes towards gun control. They find that after such shootings, there is an increase in public anxiety about crime, which is then linked to greater support for more restrictive gun laws. While this anxiety often goes away in time, they write that as mass shootings become more common – and more deadly – a sustained sense of public anxiety may lead to more long-lasting public support for gun control.

On Valentine’s Day, 2018 an eighteen year old man entered Stoneman Douglas High School in Parkland, FL armed with military-style weapons and opened fire on students and faculty. By the time he surrendered to police, he had killed 17 people, injuring others. The shooting put the issue of gun control back in focus. Over the past 12 months, other prominent shootings, such as the one in December 2017 that killed 26 people in a Texas church, and the September 2017 one in Las Vegas that fell 56 people, had re-ignited the same debate to little effect.

This prompted us to ask: is there a relationship between the public’s response to mass shootings and gun control attitudes? And if so, what is it? Specifically, does the fear of victimization prompted by such events make people more attracted to the message of the National Rifle Association (NRA) that guns provide more safety and thus gun control is counter-productive, or does it increase support for gun control?

The answer to this question, presented in our new study , draws on theories of how emotions and specifically anxiety influence Americans’ political decision-making.  Studies of anxiety suggest that when people are fearful they are often drawn to government for protection.  Worried people are even willing to give up some civil liberties and rights in order to avoid the anxiety associated with such threatening events. One effective way to minimize threat may be by endorsing restrictions on gun ownership.

Mass shootings may also remind people of their mortality; psychologists suggest that such thoughts can induce people to be more punitive in their judgments. This could be another way through which information about mass shootings may lead people to endorse limitations on what many consider a right to bear arms.

There is substantial evidence in favor of our theory.  Our survey of gun attitudes happened to coincide with the June 2015 mass shooting in Charleston, South Carolina. In fact, the data collection began a day and a half before Dylann Roof shot nine people in a church in Charleston, SC, and continued for several days after. This allows us to measure the effects of the shooting on public support for gun control by comparing the responses collected before and after the shooting.

Figure 1 below shows that immediately after the shooting there was a bump in support for gun control. This increase is small; about one point on our 25 point gun control scale, but it is measurable and statistically significant. Our theory and results fit well with those of an earlier study showing that those who live closer to the location of a mass shooting are more likely to support gun control than those further away.

Although these results cannot directly confirm that fear of crime, or anxiety, is the precise mechanism that raises support for gun control, in two earlier studies, Filindra and Kaplan found that concern about crime, whether expressed as endorsement of more government spending for crime prevention, or perceptions that the national crime rate is on the increase correlate positively with support for gun control measures.

Results from our survey experiment further substantiate the positive link between fear of crime and support for gun control.  This experiment was conducted online in December 2013 with 602 respondents. The survey participants were divided into two groups: one group was asked to read a story about a home invasion turned deadly (treatment); the other group was a neutral control group.

Respondents were then asked their views on gun policy and their perceptions of crime. As the Figure 2 shows, respondents in the treatment condition were more likely to think that crime in the nation has increased, suggesting a heightened level of anxiety and preoccupation related to crime.  Furthermore, as shown in Figure 3, those in the treatment group were more supportive of gun control than those in the control group.

However, as the event becomes more distant in time, the anxiety associated with such events dissipates and people’s attention turns to other concerns.  Ironically, the fact that violent crime today is much lower than it was at its peak in the early 1990s, along with other factors such as the activation of social identities by the gun rights movement, may be making it more difficult to sustain public demand for sensible gun control measures.  Conversely, as the frequency and lethality of mass shootings increases, sustained anxiety may provide a stronger impetus for public mobilization in support of gun control. 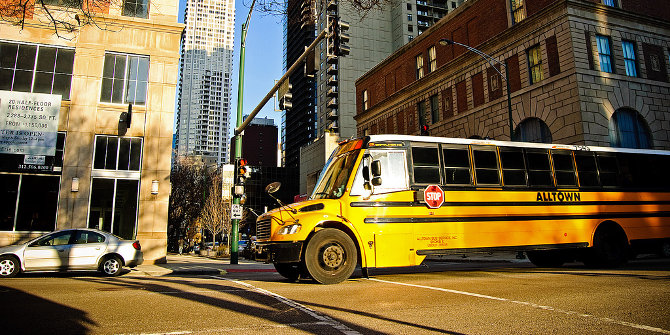 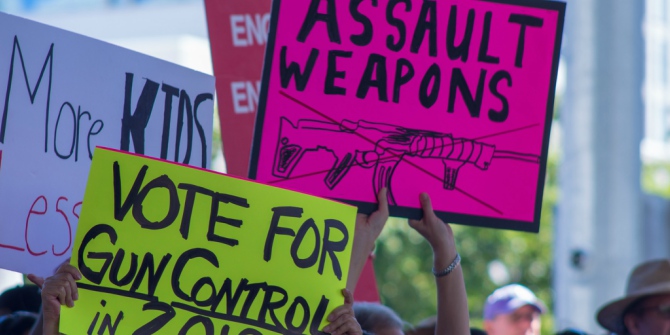