Yesterday, Democrat Conor Lamb claimed victory in the special election for Pennsylvania’s 18th Congressional District. Lamb’s election win comes as a surprise in a district which voted for President Trump by a margin of 20 percentage points in 2016. Michelle Atherton writes that Lamb, who had largely moderate positions on issues such as abortion and the 2nd Amendment, was a perfect fit for his district’s voters, who may also have punished his opponent, Republican Rick Saccone, for the GOP’s healthcare agenda.

Democrat Conor Lamb pulled out a stunning victory over Republican Rick Saccone in the March 13 special election in Pennsylvania’s 18th Congressional District, which covers the southwestern corner of the state and a portion of the Pittsburgh suburbs.  The race was so close, it could not be called until midday March 14, with just 627 votes separating the two candidates out of a total of 228,378. Lamb garnered 49.8 percent to Saccone’s 49.6 percent, with .6 percent going to the Libertarian candidate Drew Miller, who joked late on election night on Twitter that, “We’re only a few hours away from me being the most hated man in America #PA18.” Indeed with a total of 1,379, Miller received more votes than the margin between the two main candidates. Third-party candidates also made a significant impact on the 2016 presidential election in Pennsylvania where just 44,292 votes separated the winning Trump campaign from Clinton. Constitutional, Green, and Libertarian candidates shared over 215,000 votes in that cycle, more than the margin between the two main parties.

Though state law requires recounts for statewide offices in elections so close, the rule does not apply for district races. Instead, three voters from the district can request a recount on the basis of fraud or error. They do not, however, have to indicate any kind of specific act or submit evidence. Republicans are already looking to a recount, claiming “problems with the machines, voters being told to go to the wrong polling places, and Republican attorneys being barred from overseeing the counting of absentee ballots in Allegheny County,” one the four counties in the district, and the home of most of the Democratic votes. GOP officials have requested all machines used be impounded, amounting to much ado for a small stakes seat that will not impact party control in Congress in the least.

In Lamb, Democrats had a perfect fit for the economically populist electorate of the 18th District. He is a former federal prosecutor, Marine, and at only 33, full of energy. He also mirrored the district’s voters on social issues, including strong support for 2nd Amendment gun rights, a pro-life stance on abortion, though he recognizes Roe v. Wade as the law of the land, and promises to protect Social Security, Medicare, and Medicaid. He voiced strong support for organized labor on the campaign trail and even referred to himself as an “FDR Democrat.” Lamb also shied away from calling the election a referendum on the president. He even pledged not to support Democrat Nancy Pelosi for Speaker of the House should he win the election.

Saccone, on the other hand, called himself “Trump before Trump was Trump.” He became well known as a state legislator in more liberal circles for his resolution declaring 2012 the “Year of the Bible,” and more recently for his 2017 sponsorship of a bill to display “In God We Trust” in classrooms and other areas of public school buildings. On the national stage, President Trump called the candidate “weak,” and privately trashed him behind the scenes. In a strong union area, being so clearly anti-labor did not help his campaign, either.

This election was closely watched across Pennsylvania and the country as a bellwether for the upcoming 2018 congressional midterms, and a referendum on the policy agenda of the Trump administration and a Republican controlled Congress. Neither party has fared very well even if Lamb had not squeaked out a win. The fact that the race was so close was shocking in a district Trump won by 20 points in 2016. Former 18th District Congressman Tim Murphy, a pro-life Republican who resigned in scandal after allegedly asking his mistress to have an abortion, won the district handily in every election since 2003. The district was thought to be so unwinnable by Democrats, Murphy ran with no opposition in 2014 and 2016. According to the nonpartisan Cook Political Report, the district is considered R+11. However, there are still 70,000 more registered Democrats than Republicans in the district, and it wasn’t all that long ago, 2003, that the 18th was controlled by Democrats, though admittedly with different district boundaries. 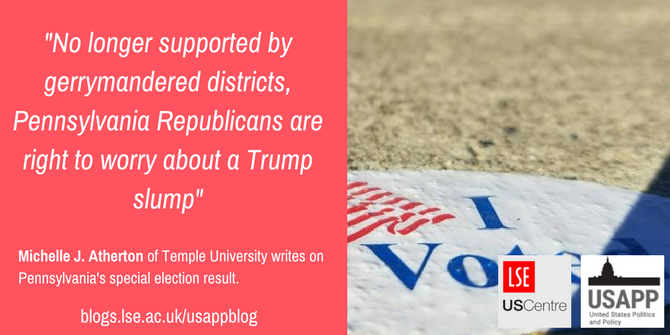 No matter the outcome of the special election, neither Saccone nor Lamb would have held the seat for very long. As a result of the Pennsylvania Supreme Court declaring the current congressional district boundaries unconstitutionally gerrymandered, there will never be another election in the district as it is currently constituted. The Court created new congressional boundaries after the Pennsylvania General Assembly and Governor could not agree on a new map following the decision, with the new map released just about one month ago. Instead, Saccone and Lamb have a chance to run again in new and separate districts in eight months’ time.

President Trump held a rally in Moon Township, a small town just outside Pittsburgh, the Saturday before the election, and even sent his son, Don Jr., and daughter Ivanka to the area to campaign for Saccone. At the rally, he told attendees that steel would be coming back, thanks to his new tariffs. Pittsburgh is still known as “Steel City,” but evidently, the tariffs were not enough to sway voters. In fact, union backing from steelworkers was cited as instrumental in getting out the vote for Lamb. There are still thousands of steel jobs in the region, yet nowhere near levels of the 1960s and 1970s. The economy has diversified, with gleaming biotech centers and shopping malls now standing on the sites of once active steel mills.

If it wasn’t the economy or steel jobs that concerned the voters in the 18th District the most, what did? According to Public Policy Polling, the issue that most drove the result was healthcare. It was listed as a top issue for 52 percent of voters in exit polls, and just 19 percent said the issue was not important or not at all important. Saccone lost votes on the Republican healthcare agenda, with 41 percent of voters less likely to vote for him because of it, and just 28 percent more likely. For those voters for whom healthcare was the important issue, Lamb won that group 64-36. Then again, this poll only asked healthcare questions.

Whether Democrats can hold onto the newly drawn 18th District remains to be seen. Trump won that new district by 14 points in 2016. Still, after other surprise Democratic victories in Virginia and Alabama, it seems like anything is possible. No longer supported by gerrymandered districts, Pennsylvania Republicans are right to worry about a Trump slump. Still, in a state that usually votes roughly 50-50 for each party in congressional elections, the GOP delegation will now move from 72 percent to 66 percent; a bit more accurate of a representation of the people of Pennsylvania.