A number of retirements in Congress ahead of the 2018 midterms have opened up the possibility for increased Latino representation in the US House of Representatives. But, the past has shown that Latino candidates aren’t always selected for, or win elections in, majority Latino districts and that Latinos and non-Latinos who are elected don’t always represent the views of their constituents. In new research, Angela X. Ocampo finds that political networks have a large influence on whether a Latino or non-Latino gets onto the ballot as a candidate. These networks are also often able to push candidates forward based on their legislative priorities, which may or may not align with the preferences of their constituents.

After serving 20 years in Congress, Rep. Gene Green (D-Houston) announced late last year that he would retire from office.  Since 1992, Rep. Green, a non-Latino, has represented Texas’ 29th Congressional district, a district that has a 77 percent Latino population.  Rep. Green’s retirement has left this seat entirely open and this has attracted numerous candidacies from both Democrats and Republicans who are Latino and non-Latino. Among the leading contenders in the Democratic primary this past March 6th were State Senator Sylvia Garcia, D-Houston, a Latina, and businessman Tahir Javed, a Pakistani American. Sylvia Garcia won the primary and is now poised to win the November election.

Similarly, Rep. Ileana Ros-Lehtinen (R-Miami) made an announcement in April last year that she would not seek re-election to represent Florida’s 27th Congressional district. Rep. Ros-Lehtinen, the first Cuban American to be elected to Congress, was part of the South Florida Congressional delegation for over 35 years. Rep. Ros-Lehtinen represented a district with a 71 percent Latino population. Soon after Rep. Ros-Lehtinen’s announced that she would vacate her seat, multiple candidates from both parties filed for candidacy, especially as this seat presents an opportunity for Democrats to flip a seat in the US House. Currently in this contest, there are 9 Democrats and 6 Republicans running who are both Latino and non-Latino.

These two open seats as well as others in the 2018 electoral cycle with a majority-Latino population such as the Illinois 4th and the Texas 16th have the potential to increase Latino representation in Congress. After all, an extensive body of scholarship suggests that demographics in majority-minority districts are critically important for producing elected legislators who represent the ethnic characteristics of their districts – what political scientists call descriptive representation. However, as Rep. Green’s case in Texas 29th Congressional district suggests, it is not always the case that a Latino representative achieves victory in a district with a large Latino constituency. Furthermore, it is also not necessarily the case that representatives emerging out of districts with a majority Latino population will substantively represent their Latino constituents, as was the case with Rep. Gary Miller (R) in California’s 31st Congressional district in 2012.

In my research, I address these puzzles and pay particular attention to the role of political groups and networks in influencing representing Latinos both in descriptive sense and of their preferences (a concept known as substantive representation), in majority-minority districts. By relying on both qualitative and quantitative data, I examine the extent to which political networks mediate the relationship between a large Latino constituency and how they are represented. I investigated the activities of political networks in majority-Latino districts to understand why some districts are able to elect Latino representatives and some are not.

From 2013 to 2015, I conducted in-depth interviews in four congressional districts and in Washington, D.C. with activists, candidates, campaign staffers, current and former elected officials, local journalists, and close observers of the events in the races in majority-Latino districts from the 2012 and 2014 electoral cycles. I also compiled a dataset of the Latino and non-Latino candidates running in all open-seat congressional races from 2004 to 2014 that had a Latino population plurality. The dataset included all congressional districts that were open-seats and where individuals had a fair chance of winning the nomination, that is without the presence of an incumbent Member of Congress. The dataset included vote turns, candidate and district demographics and financial contributions made by the candidates themselves, individuals, parties and groups. 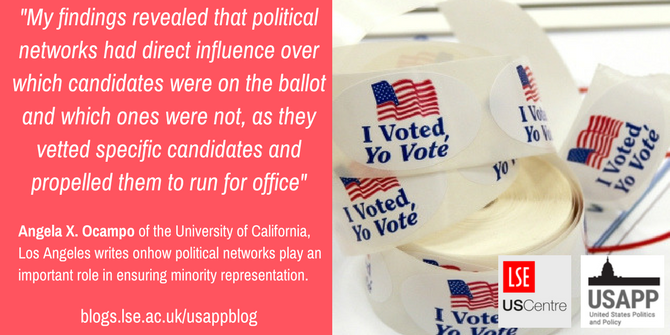 “I voted” by IIP Photo Archive is licensed under CC BY NC 2.0

My findings revealed that district demographics were not enough to guarantee a successful Latino/a Member of Congress in districts with a large Latino population. My findings revealed that political networks had direct influence over which candidates were on the ballot and which ones were not, as they vetted specific candidates and propelled them to run for office. Political networks were also critical in narrowing down candidate fields when announced Latino and non-Latino candidates might weaken the chances of one another. On this particular point, I found evidence that political networks discouraged Latino and non-Latinos by providing attractive incentives —such as financial contributions to other campaigns or coordinated campaign efforts for a lower-level office race— so they would clear the path for others. Lastly, the evidence showed that lack of coordination and fragmentation among existent political networks paved the way for the emergence of non-Latino candidates in majority-Latino districts.

Both my qualitative and quantitative findings revealed that the influence of political networks went beyond shaping the field of candidates. In fact, political networks emerged as critical actors in providing large and significant campaign resources such as access to donors, activists, canvassers and volunteers. Obtained through a simulation from one of my models, Figure 1 below shows the predicted probability of a Latino candidate winning in a majority-Latino open-seat as a function of contributions from committees and parties, versus individual-level contributions, while holding all other candidate and district level variables constant. The figure indicates that as the share of contributions coming from groups increases, the probability of a Latino/a winning a primary also increases. 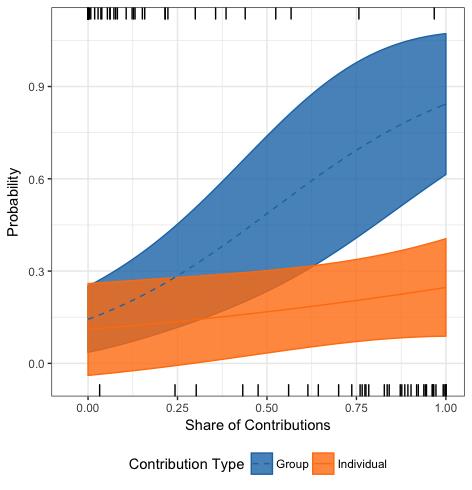 Furthermore, my data suggested that there was one additional mechanism through which political networks influenced substantive representation in majority-Latino districts. Groups and parties vetted, screened, and supported candidates that had very different affinities and legislative priorities, even if they were of the same party. For example, the evidence from Arizona’s 7th congressional district clearly showed that the candidates who were running in this district were supported by very different factions of the Democratic Party with distinct policy agendas. Each one of the candidates in this case study had divergent styles of legislating and advocacy on a number of issues, including immigration policy.

Angela X. Ocampo – University of California, Los Angeles
Angela X. Ocampo is a Ph.D. Candidate in the Political Science Department at the University of California, Los Angeles. She studies American Politics, Race, Ethnicity and Politics, and Methodology. She is originally from Bogotá, Colombia and was raised in White Plains, NY.