His increasingly extreme tweet-storms may signal a mind under great stress, but Donald Trump must still be taking some satisfaction in his ability to dominate news and the wider discourse.  Ron Pruessen argues that it’s dangerous to spend too much time going along for the ride. If the excesses of this president are to be resisted and rolled back, the deeper ills which helped generate them require as much attention as current symptoms.

Judgment calls may differ about the appeal of his advice, but it’s impossible not to respect Machiavelli’s shrewd eye. He certainly would have understood many of the behaviors and moods of the United States in 2018, for instance – not least the way in which it is far too easy to see Donald Trump as the font of all ills. Machiavelli’s famous metaphor about disease and affairs of state comes to mind: doctors knew, he said, that “at the beginning” it was “easy to cure but difficult to diagnose” tuberculosis (what Florentines called “consumption”); “as time passes,” though, “not having been recognized or treated at the outset, it becomes easy to diagnose but difficult to cure.” Despair could then easily set in. “If a prudent ruler” (or physician) did not recognize “evils” or disease, they could be “left to grow” until “there is no longer any remedy.”

Given the current president’s domination of media coverage and commentary – his command of even his critics’ (and comedians’) attention – it is clear that many of those diagnosing the political and social ills plaguing the United States have zeroed in on variants of “Trump-itis.”  This is a rickety platform for effective treatment. It is the equivalent of assuming that a patient’s shoulder pains are caused by arthritis – when it is actually bone cancer that is responsible.  A “Trump-ectomy” has its appeal, of course: a partial excision of the president’s influence with the 2018 elections preparing the way, then full removal in 2020.  What we see in the United States of 2018, however, is really the latest manifestation of syndromes and DNA configurations that reach far back into the American past – making Trump only the latest example of the way political cancers metastasize over time.

When not distracted by an “all Trump, all the time” public discourse, many of us would know that the president’s voracious appetite for the spotlight puts other important players in semi-shadow.  As Warren Buffett once said, there is never just one cockroach in the kitchen (an observation that Machiavelli would have appreciated). Trump resides in an insectarium swarming with advisers, enablers, and other leaders. Close at hand are venomous scorpions (including Stephen Miller), hungry borer beetles (Jeff Sessions, Betsy DeVos?), churlish crickets (Kelly Ann Conway?), praying mantises (Mike Pence). Even if a Humvee-sized millipede like Steve Bannon has been ejected, furthermore, his presence is more than made up for by the species living in closely linked microclimates (or swamps): wasps and spiders in Congress, state houses, certain religious communities, and various media outlets, for instance.  All in all, the president is just one occupant of a terrarium of Jurassic Park proportions. 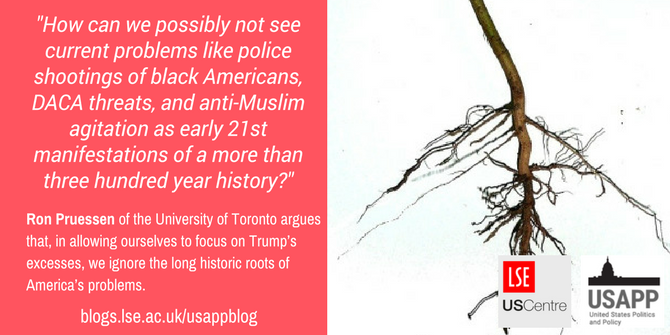 By RoRo (Own work) [CC0], via Wikimedia Commons

As a further prod to putting Trump into context, Machiavelli’s reference to “as time passes” is especially important.  Today’s abuses, that is, are far from being “of the moment” curses.  With roots deep in American history, 2018 (or 2016-18) prompts another riff on a “disease” metaphor: the way Stage 3 or Stage 4 are often reached in the evolution of cancers which have been inadequately appraised or treated. A list of steadily-gestating threats to the body politic (and the social fabric and national well-being that rely on it) would be long and complex. Consider just three examples: racism, sexism, and extreme economic inequality. The tallying up of the day to day damages being inflicted by Trump and his accomplices tends to downplay (or simply ignore) the century to century nature of their bloodlines.

How can we possibly not see current problems like police shootings of black Americans, DACA threats, and anti-Muslim agitation as early 21st manifestations of a more than three hundred year history that includes slavery, Jim Crow laws, and xenophobic attitudes and violence (with the KKK and earlier rounds of immigration restrictions as just two examples)? Why would we not place sexual harassment accusations against the current president and ongoing threats to abortion rights within the context of a national narrative that denied women legal and economic rights until the 20th century (with the right to vote withheld until 1920 and no woman appointed to the Cabinet until the 1930s, for instance)? And of course the grotesque imbalance in the new tax bill’s distribution of benefits is rooted in an economic system that has always been characterized by severe inequities: at the turn of the 20th century, after decades of fantastic economic growth, 1 percent of the population owned 55 percent of aggregate wealth while 50 percent had no wealth whatsoever; today, that 1 percent has greater wealth than 90 percent of their fellow citizens.

I’ll admit that I find myself wondering whether Stage 3 or Stage 4 is the appropriate marker for this moment. Have we actually reached the point that led Machiavelli to speculate about disease or evil descending to the point where “there is no longer any remedy.” Maybe not Stage 4, but Stage 3 instead – given the reforms and advances that have unfolded over centuries of US history? The end of slavery, the civil rights movement and its impact on multiple minority groups. Succeeding waves of feminism, increasing numbers of women holding political office (and Hillary Clinton winning the popular vote), the powerful current resonance of #MeToo. The remarkable growth of the middle class in the 20th century and the provision of social welfare entitlements to large segments of the population (including Social Security, Medicare, and government-supported higher education).  These have been profound, hard-won achievements in battles against inequities and repugnant behaviors; they warrant appreciation as we contemplate where we are – even in the Age of Trump.

Still: Stage 3 is terrible and fearsome enough. As Trump’s and Congress’s actions and plans show, historical achievements are vulnerable. The tolerance of Trump by one-third of the electorate more than a year into this presidency is both remarkable and frightening – which means it is hardly unreasonable to try to delineate an urgent health care strategy for staving off Stage 4. To focus primarily on dealing with the grotesque current champion of racism, sexism, and greed would be unwise, however. There are deeper wellsprings that require yet another round of attention and treatment.