Attempts to decipher the meaning of the 2018 elections will be more successful if they steer clear of “Red State/Blue State”-style simplification.  Ron Pruessen argues that a country of 325 million people – with a constantly tangled history – should not be squeezed into snappy tweets and memes.

Dramatic elections like the recent “off-year” contests in the US often prompt stark descriptions and summations: Did a “Blue Wave” emerge from a referendum on Donald Trump? Did a “Red State/Blue State” stand-off – in the Senate battles, for instance – provide another demonstration of the intensely angry divisiveness of a “50-50 nation”?

I can see the appeal of Red State/Blue State snapshots (as I can appreciate the Dr. Seuss rhymes they bring to mind). It’s highly problematic, however, to base analysis on data that is far too simplistic.  There are complex details lurking beneath neat media labels – and devilish nuances tell us things we really need to know if we want to understand the state of the United States in 2018 – especially as speculation about the 2020 presidential election gathers even more steam than it already has.

Consider: Red/Blue binaries mask the complexities of the American political landscape in the same way that painters fail to capture the nature of lightning. An intriguing recent study by a Hungarian optics laboratory reported on a comparison of 100 canvases with 400 photographs: painters never depicted more than eleven branches of electricity in a lightning bolt while photos showed more than four dozen. Commentary on the lightning-struck 2018 election landscape risks a similar oversimplification.

Even a modest drilling down demonstrates the reductionism of Red/Blue and “50-50 nation” notions. At the very least, for example, there are four major silos on the political acreage: Republicans and Democrats, of course, but Independents (much touted) and non-voters (at 40 percent or more, the largest of the categories!). More importantly, each of these is comprised of diverse strains. Neither Democrats nor Republicans have ever been genuinely homogenous cohorts. Historically – vertically? – there were significant differences between the GOP’s Abraham Lincoln, Theodore Roosevelt, Calvin Coolidge, Dwight Eisenhower, Richard Nixon, etc. Likewise for a Democratic party led by the likes of Grover Cleveland and Franklin Roosevelt – or once splintered by urban liberals and Dixiecrats.

Stratification is horizontal, as well, with current Republican ranks (for example) clearly divided into columns while marching in roughly the same direction but quite separately. There is Trump’s “base,” the often-angry true believers in one or more of his key rallying cries: the grievous perils of globalization; the dangers of borders too open to dark-skinned aliens, terrorists, and rapists; the risks of rotting from within posed by the false accusations of uppity women, escalating LGBTQ+ demands, or “carnage”-prone African-Americans. Such multiple furies among Trump’s passionate supporters immediately demonstrate diversity, since the posse does not require buy-in on all issues – though members do seem obligated to share a willingness to blink at their leader’s fantastic exaggerations and falsehoods. (Shakespeare had an inkling of this kind of thing: “When my love swears that she is made of truth, I do believe her, though I know she lies.”) There are also Republicans who are mostly true believers in winning elections and corralling Congressional votes needed to add more notches to a traditionally-crafted conservative belt: yet more tax cuts for the wealthy, yet more increases in defense spending, getting a Brett Kavanaugh onto to the Supreme Court, etc. These GOP stalwarts will hold their nose at the stench they know is emanating from the White House while Febreze-ing their way through their shopping list.

Democrats are no more thoroughly melded, to be sure, as the 2018 elections demonstrated: candidates and voters wanting the party to move further to the left as opposed to those seeing more ideologically satisfying and electorally promising ground in the middle – and a clutch of long-time Democratic leaders waiting for November 6 lab results to see which way to go between now and 2020.

Nor do non-voters deserve the common perception that they are an amorphous blemish on the body politic. Is it really that difficult to imagine multiple compartments in this silo, as well? There will of course be those simply indifferent to the fate of the nation – but some eligible voters might be ready for a “plague on both your houses” approach because of what they see. (What would you do if you were persuaded by the sentiment attributed to H.L. Mencken: that American politics involves the worship of jackals by jackasses?) The non-voter category also surely includes people whose lives are so strained by practical difficulties as to prevent paying attention or taking the steps needed to literally go out to vote: working three jobs or caring for sick kids or aging parents, for instance. And oh yes, there are the particular practical difficulties created by the fancy maneuvers of state government officials in places like Georgia and North Dakota. 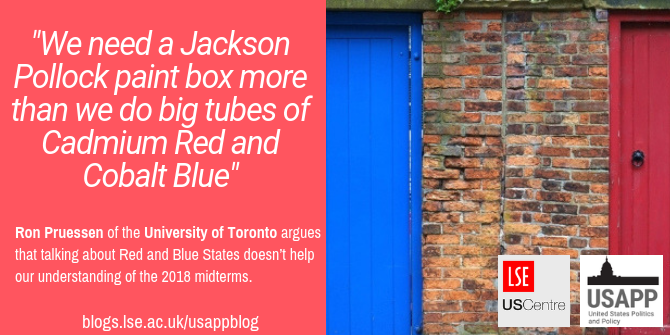 As for “independents,” they have no single party to rally around – by definition – so they will inevitably disassemble come Election Day. Their divisions are especially striking, of course, since votes may flow to Democrats, Republicans, third parties (or none).

So, what is the point here? We need to appreciate complexity – great complexity – if we want to grasp the essence(s) of the 2018 election.  We need a Jackson Pollock paint box more than we do big tubes of Cadmium Red and Cobalt Blue.  And an easily graspable “50-50” notion has to give way to something like “20-20-15-25-5-15”: messy (with numbers made up in this case), but more conducive to serious analysis.

Nor would it hurt to keep in mind that a pattern of great political complexity is as old as the United States – and then some.  Doing the hard work of digging toward greater understanding of the present day can yield richer results if we appreciate that depth requires – literally – going deep. Benjamin Franklin, for example, was one of a chorus of colonial era observers who were frequently struck by the sharp divisions they saw around them: dizzying sectarianism in religion, regional fracturing, generational and class tensions, intellectual tangles: all and more were distinguishing features of 17th and 18th century life along the Atlantic coast of North America. “So many men, so many minds,” said Franklin (a founding father who coincidentally knew a thing or two about lightning).

Constant variations were evident thereafter: e.g., the four parties fielding presidential candidates in 1860 and the earthquake that followed – or the shrewd patchwork stitching involved in Franklin Roosevelt’s political victories. These two additional examples also serve as reminders of the way the dense complexity of political thinking and behavior can be especially notable in periods of great stress. They can even, of course, be signs of breaking points and crisis. Does the lightning striking during the American storms of 2016-2018-2020 portend worse than we have yet seen? I’ll have more to say on that front, shortly.