Compared to Mexico, religion’s role in US society has hindered progress on legal equality for LGBT people

Compared to Mexico, religion’s role in US society has hindered progress on legal equality for LGBT people

New research by Caroline Beer and Victor Cruz Aceves examines the puzzling finding that Mexico has offered greater legal equality for LGBT people for a longer period of time than the United States.  They argue that this can be explained by the wider separation of church and state in Mexican politics and the strong importance of human rights in new democracies.  Examining LGBT rights at the subnational level, they also find that states with more LGBT organizations and governors from left parties are more likely to recognize same sex relationships, but the religious makeup of states only matters in the United States, and not in Mexico.

Common stereotypes of Mexico’s macho culture might lead us to expect that the legal landscape for gay rights in Mexico would be far less egalitarian than in the United States.  Major theories of comparative politics about the influence of social movements, religion, and the left would also predict more equal legal treatment of sexual minorities in the United States than in Mexico.  Yet, our review of important gay rights legislation in the two countries shows the opposite.  We find that this puzzling outcome exists when comparing national level laws, but not in comparing subnational policy outcomes.  In both countries, state governments have control over many important gay rights policies, and evidence from the state level supports theoretical expectations about social movements and left governments, but not religion.

Comparative research has found that countries with more powerful social movements, less religious populations, and strong left parties are more likely to extend equal rights to sexual minorities.  The US has a much more powerful LGBT rights movement, a less religious population, and was governed by a center-left party for a greater proportion of the past two decades than Mexico.  We would therefore expect the US to have a much more egalitarian legal framework for sexual minorities than Mexico, but in fact, that is not the case.

Mexico abolished most discriminatory legal distinctions based on sexual orientation long before the United States.  Mexico decriminalized sodomy in 1871, more than 100 years before the US Supreme Court overturned anti-sodomy laws in 2003.  The lone legal discriminatory point in Mexican law was a double penalty for corruption of a minor if it involved homosexuality.  This provision was changed in 1998.  The United States has no national antidiscrimination laws to protect LGBT people.  In 2003 the Mexican Chamber of Deputies unanimously passed a national anti-discrimination law that included sexual orientation as a protected category, established a new agency to enforce the antidiscrimination law, and developed a national anti-homophobia campaign.  Moreover, the first article of the Mexican Constitution prohibits discrimination based on “sexual preferences”.  There is no explicit constitutional protection for sexual orientation in the United States.  We should emphasis that, in many ways the rule of law has not been effectively implemented in Mexico, and agents of the state use violence in ways that are not authorized by the law.  Individual state actors have used state violence against sexual minorities, often with impunity.  While the law is not always effectively enforced in Mexico, the law does not allow for legal discrimination of sexual minorities. 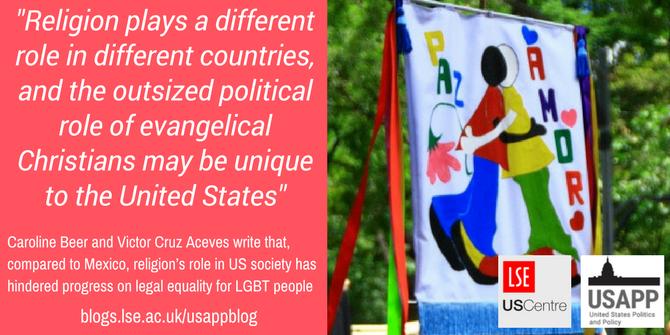 While a simple understanding of the major theories of comparative politics do not adequately explain these differences, we find that a more nuanced understanding of religion and party ideology help explain national level divergences.  An overwhelming majority of Mexicans belong to a religion that condemns homosexuality, and Mexicans are more religious than people in the United States.  However, the separation between church and state has been much wider in Mexico than in the United States.  In Mexico, there is a powerful discourse about the secular nature of the state, and it is politically unacceptable to promote a religious rationale for policy decisions.  Even religious conservatives couch their political discourse in secular terms.  This contrasts sharply with the pervasive appeals to religious doctrine found in US politics.  Thus, while religious denomination and level of religiosity do not explain LGBT policy, the relationship between religion and the state seems to be important.

We would expect reforms to grant greater rights to sexual minorities would be more likely when secular, leftist parties are in power.  But in Mexico, the new national anti-discrimination policies and constitutional reforms took place while the Partido Acción Nacional (PAN), a rightist Catholic party, was in power.  Moreover, no similar national initiatives were in play in the United States, even when the Democratic Party controlled the presidency from 1992-2000 and 2008-2016.  Still, left parties may be important.  While the US has a two party system, Mexico’s mixed electoral system allows for small parties.  Small leftist parties such as the Revolutionary Workers’ Party and the Social Democratic Party were key advocates for gay rights.  Another important explanation for Mexico’s advances in gay rights is its recent transition to democracy.  In a new democracy struggling to overcome the legacies of authoritarian rule, human rights have more salience, and therefore there may be greater consensus on the importance of protecting the human rights of all people.

Since many important gay rights laws are under the jurisdiction of state governments in Mexico and the United States, we focus on subnational policymaking for same sex relationship recognition.  In our subnational case studies, we find that LGBT organizations and leftist parties are important in both the US and Mexico, but religious denomination is only important in the US. States with more LGBT organizations and with leftist governors are more likely to propose and pass laws to recognize same-sex relationships.  In the US, states with a higher percentage of evangelical Protestants were less likely to provide legal recognition of same-sex relationships. By contrast, neither the percentage of the population that is evangelical Protestant nor Catholic matters in Mexico.

Our work has three important takeaways. First, Mexico has been more progressive than the United States in a number of ways, including gay rights.  Second, religion plays a different role in different countries, and the outsized political role of evangelical Christians may be unique to the United States.  Finally, in terms of methodology, different levels of analysis may produce different results, so it is important for social scientists to be thoughtful about the appropriate level of analysis.