In the wake of the 2016 presidential election, America’s partisan divide has become even more apparent, with more and more people feeling that they actively dislike members of the opposite party. In new research, Christopher McConnell, Yotam Margalit, Neil Malhotra and Matthew Levendusky find that this negativity also extends to work and other business relationships. Not only are people willing to accept less pay from an employer who shares their party affiliation, they are also more likely to buy from sellers who are similar.

After the bruising and contentious 2016 US presidential election and the subsequent controversies of President Donald Trump’s first year in office, it’s not surprising that Americans’ evaluations of members of the opposite political party have reached an all-time low. According to data from the Pew Research Center, 45 percent of Republicans and 41 percent of Democrats think the other party is so dangerous that it is a threat to the health of the nation. This animus has spilled over into everyday social life: According to a HuffPost/YouGov poll, nearly half of Americans have had an argument with someone (a friend, family member, coworker, etc.) about the last Presidential election. Fifty years ago few people expressed any anger when asked how they would feel if their child married someone from the other party. Today, one-third of Democrats and nearly half of Republicans would be deeply upset. On item after item, Americans not only disagree on the issues but also increasingly personally dislike those from the other party.

This is a phenomenon scholars call affective polarization. Political scientists have attributed a number of important consequences to the increase of affective polarization in the United States, chief among them increased gridlock and dysfunction in Washington, DC. But much less is known about whether affective polarization changes how we interact outside of politics. For example, do these partisan sentiments affect economic exchanges between individuals from opposing parties?

This question is especially timely given recent, post-election discussions of American consumers either supporting or boycotting companies for their association with the opposing party. For example, the group Grab Your Wallet has suggested that people boycott several companies over their ties to the Trump administration, including L.L. Bean and Macy’s, and the #DeleteUber hashtag spread after Uber failed to support New York taxi drivers’ protest of the administration’s travel ban. Ivanka Trump’s brand has been a political football used by both the left and the right. Most recently, Delta Air Lines canceled a promotional discount for NRA members in the wake of the Parkland shooting, reflecting the increasing tendencies of companies to engage with the current political climate. Are these simply highly publicized but isolated incidents, or do they represent a broader trend of partisanship entering the economic lives of Americans?

We conducted four experiments to address these questions by exploring the role of partisanship in shaping economic behavior. In the first experiment, a field study carried out in an online labor market, we assessed whether individuals are more likely to demand higher wages when they learn that their boss’s political party is different from their own. The second study examined whether people are less likely to purchase a heavily discounted gift card if the seller was affiliated with the other party, but more likely to do so if the seller is from their own party; the third study replicated this in a larger online marketplace. In our fourth study, an incentivized survey, we offered participants the ability to make money, but we told them that we would also make a donation to the opposing political party. Each of these experiments allowed us to assess how participants’ economic choices and actions are shaped by their partisan commitments.

All four experiments offer evidence that partisanship influences economic behavior, even when it is costly. For example, in the labor market experiment people were willing to work for less money for fellow partisans; this effect is as large as the effect of factors like relevant employment experience. When presented with a purchasing opportunity, consumers were almost twice as likely to engage in a transaction when their partisanship matched the seller’s. In our survey experiment, three-quarters of the subjects refused a higher monetary payment to avoid helping the other party — in other words, they preferred to make themselves worse off so that they would not benefit the other party. Taken together, these results clearly indicate that the trends we highlighted earlier are unlikely to be isolated incidents. The impact of party attachments on economic choices is likely to be stronger and more widespread than generally recognized. 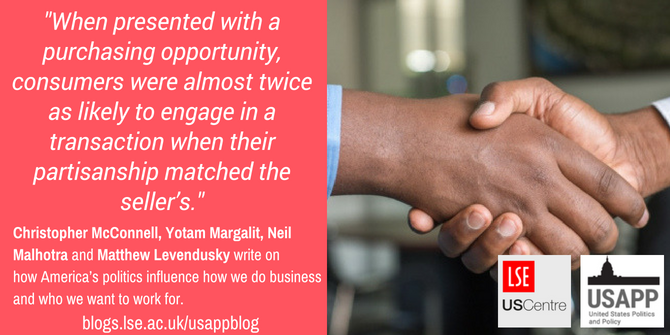 Photo by Cytonn Photography on Unsplash

However, even though we see the impact of partisanship in all of our studies, we also find that it can take on different forms in different contexts. In our labor market experiment, we find that workers are generally reluctant to charge more when they learned the company owner was from the opposite party: while they offered a same-party discount, they largely did not require an opposing-party premium. Similarly, people were more willing to engage with same-party sellers but did not punish opposite-party sellers. These findings mirror other recent research that partisans, while happy to encourage preferential treatment for co-partisans, are unwilling to sanction harm against the opposition. While many well-reported examples of partisanship involve discriminatory behavior towards the opposition, we find that in ordinary settings, partisans may sometimes hesitate to cross the line into hostile behavior. One reason for this could be that in our experiments, people had no previous interactions with the employer/seller, meaning that they could only update their beliefs more positively. We may have found different results if people were interacting with a well-known employer/seller.

Our results highlight another point about partisanship in contemporary society: It has become an important social identity. It extends beyond particular policy beliefs or support for specific politicians. Our findings show that people evaluate the exact same transaction differently based on whether the other party is a Democrat or a Republican, even though their partisanship ostensibly provides no information about their quality as an employer or seller. (Other studies have found that partisanship shapes how people judge the seriousness of criminal acts, the suitability of someone for a merit scholarship, or whether they would want to date someone.) The mechanism behind this difference remains murky. People may infer characteristics such as trustworthiness based on partisanship, or may simply be reacting emotionally. Either explanation would fit the patterns we have found in our work. But what seems clear is that partisanship’s power is not limited to politics.

Our results show that we should be for paying greater attention to potential discrimination based on partisan affiliation. To date, few social norms constrain such behavior, and because social media makes political expression increasingly visible, it is now common to know the partisan attachments of those around us. Our analysis suggests that partisan-based discrimination may occur even in the most ordinary economic settings, and not just in response to highly publicized campaigns. As such, this type of discrimination should be the subject of more systematic scrutiny — not only from scholars but also from businesspeople, workers, and consumers. Lastly, our study raises the possibility that corporate executives who inject politics into their businesses can boost support among those who agree with them, but may alienate those who do not.

Yotam Margalit – Tel Aviv University
Yotam Margalit is an Associate Professor of Political Science at Tel Aviv University. He specializes in the fields of international and comparative political economy. Much of his work deals with the political consequences of globalization, examining how its economic and cultural effects influence electoral politics and shape mass preferences on issues such as immigration, trade, and welfare spending.

Neil Malhotra – Stanford Graduate School of Business
Neil Malhotra is Edith M. Cornell Professor of Political Economy in the Graduate School of Business at Stanford University. He also holds a courtesy appointment in the Department of Political Science. He serves as the Louise and Claude N. Rosenbrg, Jr. Director of the Center for Social Innovation at the Stanford GSB. He has authored over 60 articles on numerous topics including American politics, political behavior, and survey methodology.

Matthew Levendusky – University of Pennsylvania
Matthew Levendusky is currently an associate professor of political science at the University of Pennsylvania. His research focuses on understanding how institutions and elites influence the political behavior of ordinary citizens. This broad question is taken up in studies of mass polarization, voter cue taking, the impact of partisan media on ordinary voters, and a variety of other substantive questions.