Since the election of Barack Obama and continuing with the rise of Donald trump in 2016, American politics has become more and more racialized. While levels of racial resentment have remained largely unchanged since the 1980s, Adam Enders and Jamil Scott find new evidence that it has become increasingly correlated with political issues such as vote choice, partisanship and ideology. They argue that the racialized nature of our current political discourse has been changing the way the public thinks about politics – a change that may be difficult to undo.

The election of the first Black President, Barack Obama, in 2008 brought a number of important changes to the American political landscape. One such change was the increased connection between negative racial attitudes and political issues – “racialization”. Perhaps most stark was the spillover of racial prejudice in to attitudes towards healthcare, merely because of the association of healthcare with President Obama and his signature healthcare reform, Obamacare.

Rather than an “Obama effect”, though, our research shows that racialization was occurring before Obama, and has continued since he left office. To be clear, we are not saying that racial prejudice has increased in the US. Figure 1 below shows the average level of racial resentment among white respondents for presidential election years from 1988 to 2016. Contrary to popular worries about an increase in racism, we find no evidence that racial resentment has increased over the past 30 years. 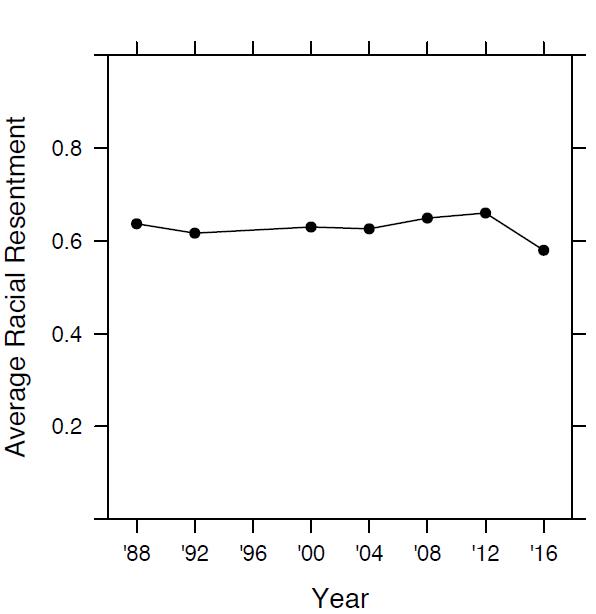 To test this theory, we used data from the American National Election Study (ANES), a high quality, nationally representative survey of the American mass public. The survey items we used to measure racial resentment appear on surveys conducted in each presidential election year from 1988 to 2016, except 1996. The specific survey questions asked respondents to provide a reaction to four questions or statements covering racial politics in America, such as “Over the past few years, blacks have gotten less than they deserve” and “It’s really a matter of some people not trying hard enough; if blacks would only try harder, they could be just as well off as whites”.

The simplest test of the racialization theory is that the correlation between racial resentment and things like vote choice, partisanship, ideology, and attitudes about political issues will increase over time. We plot these correlations by election year in Figure 2 below. 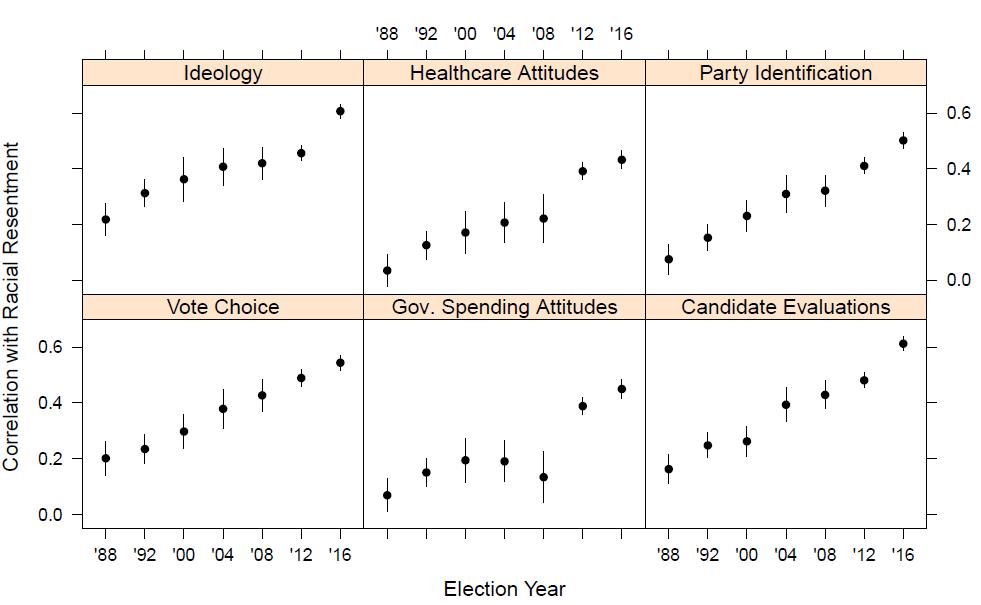 To be sure that these trends really are due to racialization rather than some other factor, we ran a series of statistical models where we controlled for the effects of things like political values, authoritarianism, attitudes about the proper size of government, and sociodemographic characteristics like education and age. Even controlling for these other factors, the relationship between racial resentment and the political attitudes and behaviors in the figure become stronger over time.

Our findings have a number of implications for American politics and the role of race in political decision-making going forward. The political strategy of attaching race to policy issues is not new. Issues like welfare continue to have a racialized tone in political discourse and this likely will not change. Regardless, our analysis shows that these fixtures of American politics have enduring, cumulative effects. Even though some of these strategies haven’t necessarily changed much in the recent past, repeated exposure to this type of political communication has caused change among the mass public in the form of increasingly racialized political decisions.

Furthermore, this increasing racialization of even core political attitudes and orientations can have a domino effect where other issues and behaviors are even more easily racialized. If people high in racial resentment are increasingly neatly sorted by partisanship, ideology, and issue attitudes, it will be easier for politicians and organized interests to appeal to those individuals on the basis of race. In other words, as negative racial attitudes become more connected with more political choices, disentangling the two will be increasingly difficult.