Economic inequality is a growing problem in the US. While labor unions are one pathway to lower levels of inequality, their presence in the US is declining relative to other industrialized democracies. But to what extent does organized labor provide a check on inequality above that of public policy? Using the American states, Laura Bucci finds new evidence that those where unions have more members are more equal, and that this pattern is not simply because those states are more liberal. While organized labor does lower levels of inequality, state labor policy, such as enacting Right to Work laws may make the relationship more difficult to maintain over time.

This spring many state capitals were packed with striking teachers expressing concerns about inadequate pay and poor benefits. Other industries, like workers at UPS, seem set to strike later this summer. Ultimately, most of these strikes were successful and workers received the pay and benefit increases that were demanded. These strikes demonstrate one of the ways that organized labor can reduce economic inequality, by decreasing levels of pay inequity. Because these workers will be paid more, the distribution of income is more equal.

When a country has high levels of union membership and there is a strong leftist party, generally a Social Democratic Party (SDP), working class voices tend to be better represented by government, policy is more redistributive, and there are lower levels of inequality. The United States does not have particularly high union membership, especially compared to Western European countries, and does not have a strong SDP. However, states vary in their history with unions, the current strength of organized labor, as well as the degree to which public policy is liberal or conservative. Variation across these factors at the state level, but a common national context, is important to understanding labor’s role in reducing economic inequality.

Labor unions help to alleviate levels of economic inequality, both within the labor market and also through changes to public policy. This means that in states where unions have more members, pay differences between income groups are not as large, and states with more union members also encourage governments to deliver redistributive benefits. Through 2014, the last year of my study, both liberal policy and higher unionization rates reduce levels of inequality. This pattern stems from labor’s ability to condense the top of the income scale. Because the growth in economic inequality stems from the very rich making more, it is important to understand that where unions have more members the very rich make less, making a state more economically equal. 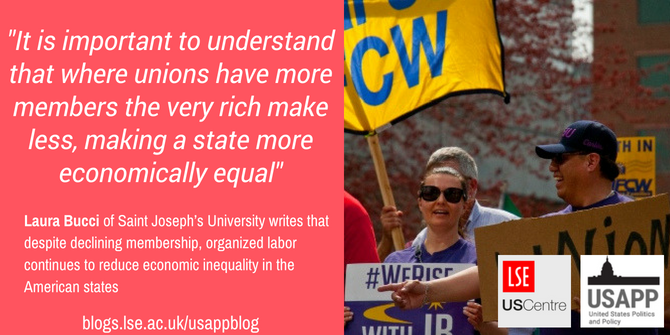 “Traditional Workers May Day Rally and March Chicago Illinois 5-1-18 1248” by Charles Edward Miller is licensed under CC BY SA 2.0

To understand how much more equal states could have been, I performed statistical simulations of what a state could have looked like if unionization remained at its 1970s levels and all other factors included in the statistical model were allowed to change (liberalism of state policy, manufacturing rates, size of a state’s economy, and demographic composition of its population).

While all states would be more equal today if union membership had not declined, some states would be more equal than others. Union decline matters more for levels of inequality in a state like Michigan, and less in a state like South Carolina. Figure 1 plots the simulated levels of inequality using 1976 unionization rates as circles, and 2014 rates as squares. Higher values indicate that a state is more unequal. 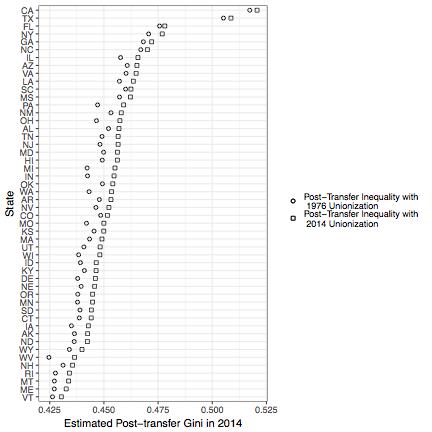 Figure 2 shows the top ten states which would have been the most economically equal had unions maintained membership at 1976 levels. Interestingly, state policy in many of these places has sought to make it more difficult for unions to form and to collectively bargain. Of the ten states presented, four states passed Right to Work legislation between 2010 and 2014. Other states included on this list either passed and then repealed Right to Work legislation by referendum vote (Ohio), or passed Right to Work by 2017 (Missouri).  Right to Work legislation deals with private sector unions, though there are similar analogs for public sector workers. These states also tended to pass state laws that were meant to make unionizing, and maintaining union membership, more difficult in the public sector. The effects of these laws will vary based on the timing of contracts and existing state law, but will change how unions organize and pursue members. 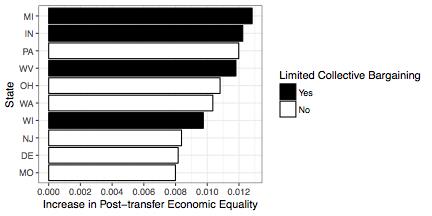 Unions continue to provide a necessary role in reducing economic inequality. As unionization declines, without intervention from government or some other actor, it is likely that inequality will continue to grow. Though strikes have been successful, higher levels of inequality, structural barriers to organizing, and fewer members means that the work that unions becomes increasingly more difficult. States play an important role in understanding how unions can affect levels of inequality and and the degree to which unions need to adapt in uncertain times. Efforts to recruit members from different occupations tends to be successful in states that already have high unionization relative to other states. Policies passed by state governments, especially labor curbing legislation, may make the relationship between unions and levels of economic equality less certain in the future.