Less than a month ago, Missouri’s Republican Governor Eric Greitens resigned in the wake of a number of scandals including accusations of corruption and sexual misconduct. Robynn Kuhlmann writes that Greitens’ resignation means that politics in the Republican-dominated Show Me State are now more or less back to normal, and that state Democrats should not expect an electoral bump this fall. Even the state’s US Senator, Claire McCaskill, faces a tough race to keep her seat as her Republican challenger, state Attorney General Josh Hawley’s, political fortunes have benefitted from Greitens’ resignation.

Governor Eric Greitens’ resignation on June 1st settled an incredibly rocky period for Missouri state politics. During the 17 months of Greitens’ tenure, the Missouri General Assembly had to withstand a Republican governor with an unconventional and aggressive governing style.  Political observers witnessed moments of rather interesting power struggles between a highly confident political neophyte and a veto proof Republican legislature. His tenure was an ongoing series of storms that waxed and waned legislators’ stress levels in Jefferson City. Greitens came into his position with a dearth of political capitol and a fairly ambiguous history as a Republican party advocate. Alongside his relative lack of political resources, and further complicating this relationship was that he also came out of a nominally competitive race against Republican-turned-Democrat, Chris Koster in 2016, with a vote margin significantly less than other state-wide executives.

By the end of 2017, Greitens had faced legal allegations that spanned the use of dark money, a disappearing text app (Confide) for official government activities, and the use of a donor list from the nonprofit organization, The Mission Continues.  To some, these allegations were falling on the deaf ears of Attorney General, Josh Hawley. As a Republican candidate for the US Senate, Hawley’s inaction was a talking point for the Democratic incumbent, Senator Claire McCaskill. In January of 2018, Greitens political cliff was finally in view in the form of a sexual affair.  A few months later, a house committee investigation produced a report that detailed incredibly disturbing accounts of sexual abuse during that affair. Eric Greitens maintained his innocence and framed accusations of sexual misconduct a ‘political witchhunt.’ Despite calls from fellow Republicans, he refused to resign. This effectively gutted his ability to govern. Facing two felony indictments and possibly more legal troubles, Eric Greitens resigned and the state headed back towards politics as normal.

Candidates for legislative seats at the state and national levels were preparing for the 2018 election season during the Greitens saga.  A Republican held veto proof legislature and highly uncompetitive state legislative races characterize Missouri’s political landscape.  In 2016, about 49 percent of state house seats in Missouri were uncontested by Democrats.  However, in 2018, this number was cut in half at 23 percent – more than likely due to the heightened energy of a Trump Presidency.  One may think that 2018 is a year Missouri Democrats will capitalize off low Presidential approval ratings and a scandalous Republican Governor. If the 2018 special elections are to tell us anything at all about the state’s mood, two out of five legislative seats did flip from Republican to Democrat. However, these seats have been rather ‘swingy’ in the first place. (see Table 1)   Seats that flipped may just be residuals of enthusiasm among Democrats, changes in population demographics, and changes in campaign ground games.

This year, Democrats will make only minimal gains in the Missouri state legislature. More than likely those elections will not produce any discernable crack in the veto proof legislature Republicans currently enjoy; out of 163 state House races, only three are potentially competitive. Ranking Republicans at the state-level rose to meet the political mess of Governor Greitens.  Because of this, it is questionable whether the party will take the heat for a rogue governor who clearly acted like a political outsider.

All eyes are on McCaskill and Hawley

US House seats for Democrats in Missouri do not stand to fare any better than Missouri’s state legislative seats. Missouri’s US House districts are packed partisanship-wise ensuring the status quo of seven Republicans to one Democrat will be easily maintained.  The bigger question is how the bumpy political road of Missouri state politics will affect the US Senate race. Incumbent Democrat Claire McCaskill’s seat is one of seven highly competitive races, that if kept may contribute to a Democratic majority in the US Senate. Despite Democratic enthusiasm, as it currently stands, polls show Republican challenger Josh Hawley at McCaskill’s heels.  Recent polling illustrates that Republicans are just as enthusiastic as the Democrats for the 2018 elections.

The political landscape of statewide elections Missouri is unlike other lower level races.  Missouri’s uncompetitive US House seats and state legislative elections illustrate how Republicans reap the electoral fortunes of redistricting.  However, there are strongly divided partisan cleavages between rural/urban (and suburban) areas.  Prior to 2016, Missouri had a mixture of both Democrats and Republicans in statewide and nationally held offices where cleavages modified the left-right vote – which makes Senator Claire McCaskill a strong competitor in the state. In fact, Democrat Jason Kander was a competitive contender for Senator Roy Blunt’s seat in the 2016 election, despite a slam-dunk election for presidential candidate Donald Trump. The partisan balance between rural, urban, and suburban areas in Missouri creates a formula just right for Democrats to win statewide elections despite down-ballot seats that are Republican strongholds. 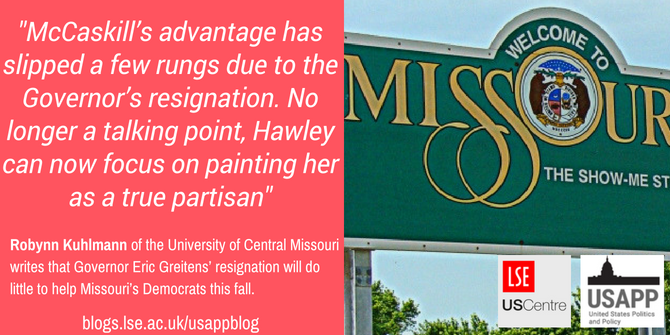 For both candidates, the Senate race is not going to be easy. The campaign ground game is to induce excitement among partisans to turn out to vote. Hawley did have a rough start to his campaign.  Eric Greitens played the bully pulpit– at Hawley’s expense.  Greitens may very well have placed Hawley’s approval ratings among constituents in a precarious position. Early in his campaign, Hawley was in a full-fledged battle with Governor Greitens. Unfortunate for Hawley, Greitens still held a slim majority of Republicans who approved of his job performance.  It was because of this, party leaders publically lamented that Hawley’s campaign was at risk of a lack of excitement. To be sure, he split his time taking shots from a Republican governor and Democratic US Senator Claire McCaskill.

McCaskill, a cunning political operator, was able to slam Hawley for being soft on Governor Greitens as Attorney General, using the scandal to her advantage. Meanwhile, she distanced herself from other democrats to pose herself as a true moderate. She even called out Hillary Clinton over comments on how she described Trump voters and also shies away from critiquing President Trump. At one town hall meeting, for example, she stated “My job isn’t to fight the president. My job is to fight for you” – rousing the ears of Missouri moderates – and creating a perfect headline to ease Trump supporters’ anxieties. However, McCaskill’s advantage has slipped a few rungs due to the Governor’s resignation. No longer a talking point, Hawley can now focus on painting her as a true partisan.  Further, the state legislature moved a right to work ballot initiative to the August primary, placing a damper on the campaign as it may have brought out more Democrats to vote, had it been in November, as unions would have organized around this measure. What’s left from the carnage of Greitens resignation is politics as normal in the state of Missouri.  Now that he is gone, it eases pressure from Josh Hawley and subverts an easy fight for McCaskill to pick.

Robynn Kuhlmann – University of Central Missouri
Robynn Kuhlmann is an Associate Professor of Political Science in the Department of Government, International Studies, and Languages at the University of Central Missouri.  Her areas of expertise are state politics, political parties, and voting and elections.  Her most recent works also include “See Hillary Run: Hillary Clinton, American Exceptionalism, and Exceptions to the Rule” with Gregory Streich in the book The Global Hillary and Show Me Missouri Politics: A Guidebook to the Missouri Constitution.