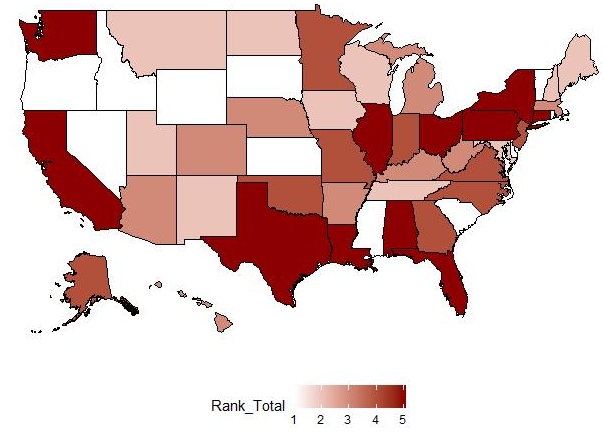 Despite the frequency with which the Supreme Court strikes down state legislation, there is considerable variation in the amount of legislation invalidated per state. Figure 1 shows the number of state laws invalidated by the US Supreme Court in the modern era (1971-2012).  Darker-shaded states indicate that those states have experienced a greater number of their legislative enactments invalidated.  Alternatively, lighter-shaded states indicate that they have had fewer enactments invalidated by the Court.  New York has seen 13 of their state laws invalidated by the Court.  Conversely, some states, such as Idaho, have seen none of their laws stricken by the Court in recent years.  This raises the following question:  What political factors associated with a state might incentivize their legislature to pursue policies that rest on questionable constitutional principles?

In a recent research, we consider one state political factor that may incentivize state legislatures to pursue constitutionally risky policies−elections.  Elections have been shown to influence the decisions judges reach on a death penalty case and the type of policies legislators pursue.  We present a few causal mechanisms which link competitive state legislative elections to the number of laws invalidated by the Supreme Court.  It should be noted that our argument rests on the assumption that the Supreme Court Justices reach decisions, in part, out of concern for legal principles.  Of course, the justices also consider other factors as well when issuing a ruling (e.g., ideology and other political factors).  First, legislators who face greater electoral pressures are known to pursue policies that are pleasing to constituents.  We suggest that legislators in electorally competitive states might be more likely to pursue constitutionally risky policies to appease the concerns of their constituents.  Second, state with highly competitive elections are known to enact more innovative policies.  New and innovative policies might be legally ambiguous because it is unclear whether the new enactment falls within the confines of the US Constitution.  Taken together, we expect that states with more competitive legislative elections should be associated with an increased likelihood of their statues being invalidated by the Supreme Court relative to their counterparts with less competitive elections. 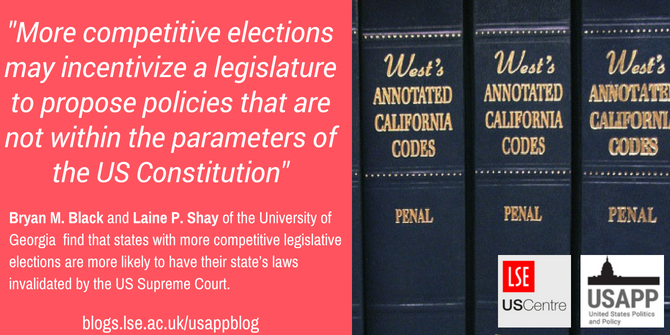 ‘California Penal Code‘ by Coolcaesar is licensed under CC BY SA 3.0

To test this argument, we use data from another study.  Specifically, we examine whether any state enactment was invalidated in any year that the US Supreme Court had the opportunity to review a case between 1971 and 2012.  The measurement of electoral competition we employ takes into account four different district-level election components: winning candidate vote share, margin of victor, uncontested election, and safe seats.  This measure of electoral competition can take on any value between 0 and 100. 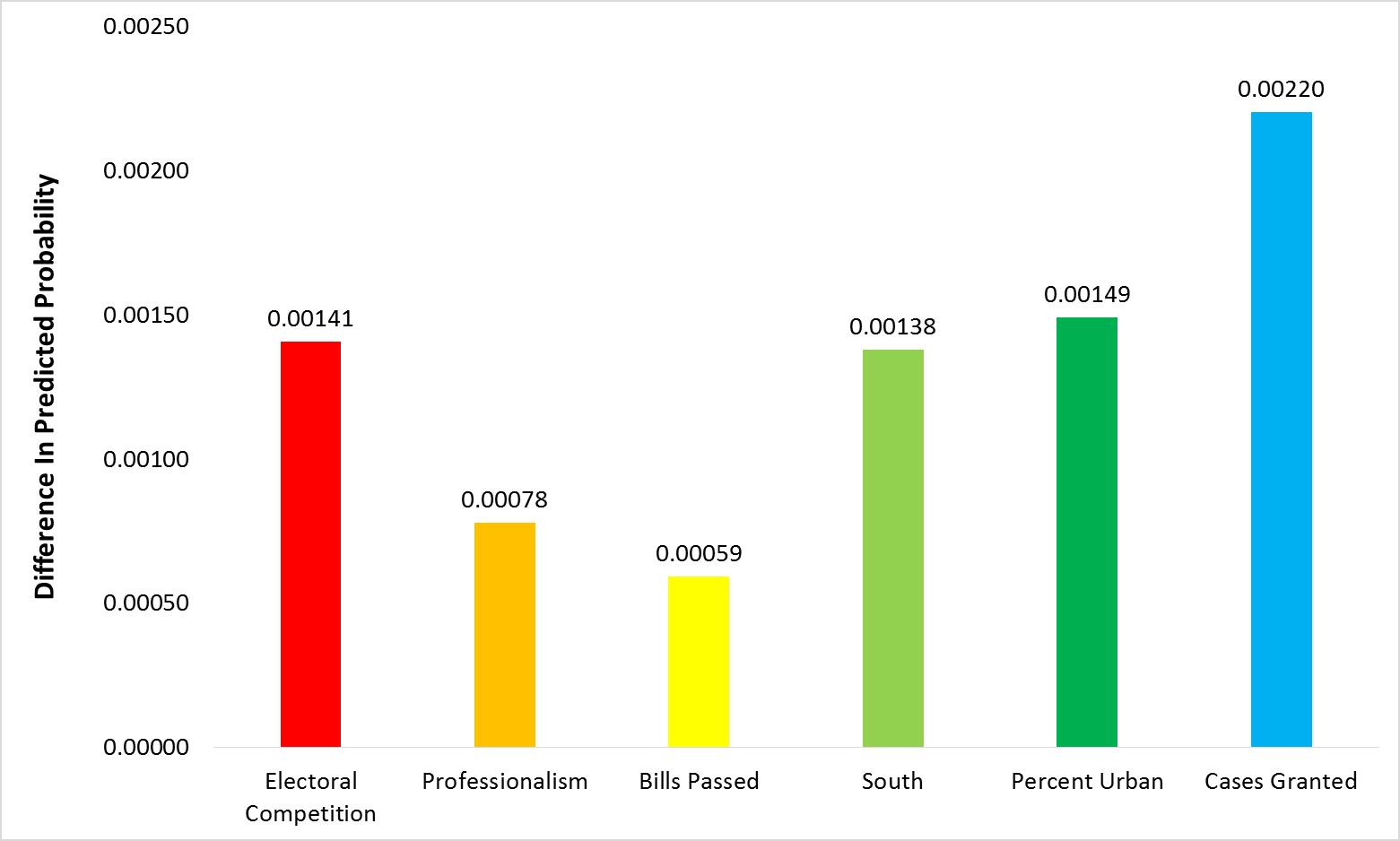 Notes:  Estimated from Black and Shay (2018).  Difference in predicted probability are calculated by varying each variable of interest from its minimum to maximum value.

Our findings indicate that highly competitive state legislative elections are positively linked to the US Supreme Court’s decision to invalidate a state’s law.  Additionally, these results provide some evidence that the political environment that the law is crafted in can influence the likelihood it rest on sound constitutional principles.  Our findings may also offer several real-world insights.  For instance, there have been calls from several organizations and individuals to enact various institutional and electoral reforms to increase electoral competition within the United States.  With these growing demands for political reform and more competitive elections, it is vital that we uncover an unintended consequence associated with an increase in competitive elections. These findings suggest that more competitive elections may incentivize a legislature to propose policies that are not within the parameters of the US Constitution.  Further, it is also important to uncover how more competitive lections could influence other democratic norms and branches of government.  These results would imply that the judicial branch might intervene in more policy debates in order to reign in the legislative branch because state legislators face electoral pressures to pursue constitutionally risky policies.