Fifteen US states have introduced some form of term limit on state legislators which prevents them from running for office for more than set number of times. While some past research has suggested that term limits can lead to weaker state legislatures, new research from Laine P. Shay suggests that they can empower the party in power’s Speaker.  He finds that compared to states without term limits, a state with the most stringent term limit law is associated with an 11 percent increase in tools delegated to the Speaker’s position. 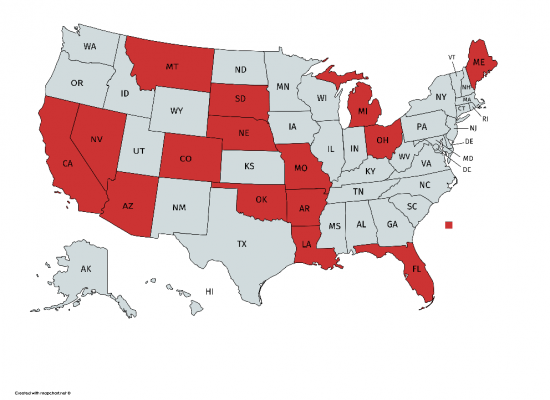 Early findings suggest that term limits should weaken party leaders. For example, term limits are known to increase a governor’s ability to affect policy because the legislature’s members cannot defend their institutional interests. Moreover, as stated by one report, “Perhaps the most noticeable changes in many term-limited legislatures have to do with leadership. Leaders rise to the top more quickly than before but stay for a briefer period and wield less influence than in the past.” Taken together, previous accounts of term limits seem to show that they weaken the legislative branch. However, these studies do not examine chamber rules and procedures. Instead, they rely on legislative surveys. My research departs from previous analyses by examining actual legislative rules.

I argue that we should see more power delegated to the Speaker in states with legislative term limits. First, because of a lack of time to build up institutional knowledge, legislative term limits are known to decrease policy expertise among the members. This lack of policy knowledge may pose a challenge to states in terms of policymaking. One way to overcome this obstacle is to delegate more power to the Speaker to help ensure important policies can be addressed. Second, term limits are known to weaken necessary relationships among legislators within a chamber. This could make it harder to pass important laws. To overcome this obstacle, we might see a Speaker attempting to fill this void. Consequently, this close relationship with the Speaker might incentivize the members to delegate more tools to the Speaker. 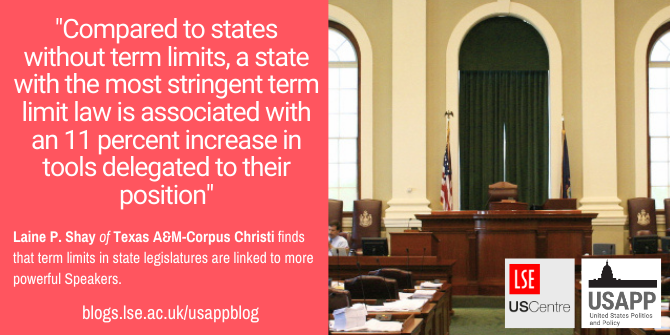 To explore this relationship, I analyze chamber rules in almost all lower chambers between 1981 and 2015 and use an index created by Christopher Z. Mooney of the University of Illinois. This index includes: the ability to control where a bill is referred, committee assignments, and committee staff. Higher values indicate a stronger Speaker. Kentucky – which does not have term limits for legislators – tends to have one of the least powerful party leaders. The Kentucky Speaker has little influence over the allocation of committee assignments, bill referrals, committee staff, and the appointment of key leadership positions. This stands in stark contrast to the Oklahoma Speaker (a state which has term limits) in the early 2000s. The Oklahoma Speaker has significant sway over committee assignments, the selection of committee chairs, and bill referrals. In Figure 2, I graph the amount of power that the leader in the lower chamber possess within a state in 2015. Darker shaded states indicate a Speaker has more tools to control the chamber. Figure 2 suggests there is great deal of variation in Speaker power across the states. When it comes to legislative term limits, it is important to recognize that term limit laws vary significant by state. Therefore, I measure legislative term limits with a variable that captures the law’s stringency. 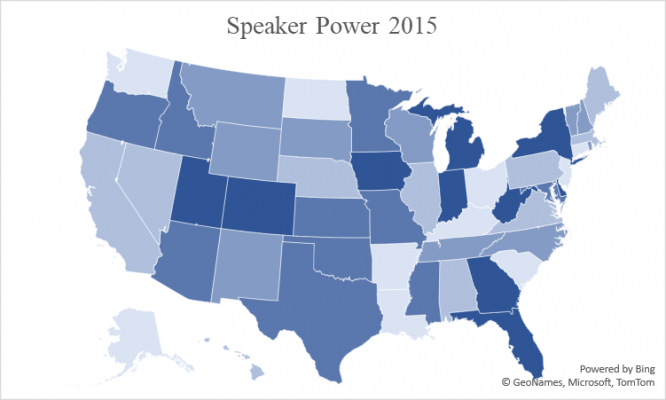 Notes: Based on data from Shay (2020). The figure represents the Speaker power score for each state in 2015. Darker shaded states indicate that the Speaker is delegated more institutional tools. States that are white indicate an institutionally weak Speaker. Nebraska is filled with the mean value of the data set and is included for visual purposes only. Nebraska is not included in any of the data analyses.

My findings suggest that states with legislative term limits result in more powerful party leaders in the lower chamber. This has important political implications. First, these results would suggest that leaders in term limited states could potentially be more successful at controlling the policy agenda. This might help to explain how the California Speaker was able to block a bill that dealt with a single payer health system from reaching the lower chamber’s floor. Second, these findings cast doubt on previous analyses which suggest that term limits weaken the legislature. My results suggest they empower at least some prominent members in the legislative branch.