Last week President Trump signed an unprecedented $2 trillion stimulus bill aimed at protecting workers and businesses threatened by the Covid-19 pandemic. Perhaps equally surprising was the relative lack of opposition from Republicans, who at other times are opposed to increased government spending and growing deficits. Drawing on their work on how party-supporters feel about budget deficits and how the media reports on them, Ian G. Anson and John V. Kane write that these supporters are less concerned about deficits when a president from their own party holds the White House. The role of conservative media, they comment, means that this effect is especially stark for a Republican president like Donald Trump.

As the worldwide Covid-19 crisis continues to imperil millions, experts are still struggling to reckon with its long-term economic effects. The US Federal Reserve recently released a report forecasting staggering economic impacts in the United States, including 47 million jobs lost and an unemployment rate in excess of 32 percent. This unease has, in turn, prompted worker action, as companies like Amazon and Instacart have been forced to respond to large-scale strikes and demonstrations. Such dismal economic prospects have prompted swift government actions across the globe, with countries like Canada, Germany, and Denmark promising stimulus packages of varying generosity.

In the midst of this fearsome economic environment, the Trump Administration has succeeded in navigating an unprecedented $2.3 Trillion stimulus package through a divided Congress, ensuring basic protections for businesses and workers harmed by the crisis. To be sure, had no bill been passed, large deficits would likely have occurred anyway as a result of a massive increase in unemployment and plummeting tax revenues.

Still, the stimulus is an enormous expenditure. Kentucky Rep. Thomas Massie’s last-minute opposition suggests that at least some deficit hawks weren’t happy about the bailout. But in the eyes of most Republican lawmakers, the bill was a good idea. Majority Leader Mitch McConnell (R-KY), for example, took pride in the bill’s passage, despite having been vocally critical of stimulus bills during the Obama Administration.

This swift, united action by Republicans in Congress suggests that they feared little censure from Republican Party identifiers in the general public—a group that is well-known for their wariness of budget deficits. Our ongoing research on deficit spending and public perceptions helps to explain why.

In our research, we examine how the incumbent president’s partisanship influences rank-and-file partisans’ concern over budget deficits and the national debt. While many scholars have recently investigated the role of incumbent partisanship in biasing the overall economic perceptions of partisans, we believe that budget deficits are a special case of this broader ‘motivated reasoning’ phenomenon. This is because unlike economic news, which can paint positive or negative pictures about an incumbent’s performance depending upon current conditions, news about deficits—a virtual constant in American government—can be summoned to serve a partisan narrative whenever a political opponent assumes office. 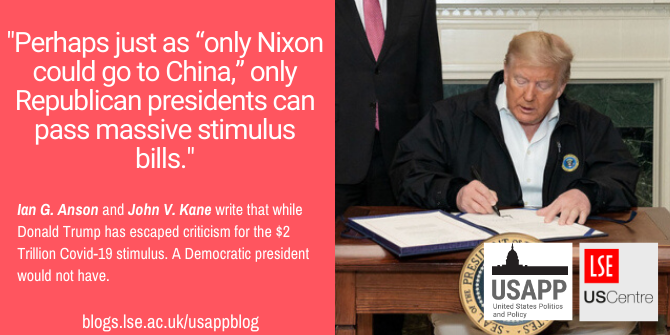 Drawing upon survey data from the Pew Research Center, we examined what happened to partisans’ beliefs about deficit spending and reduction after Donald Trump assumed office in January of 2017. To accomplish this task, we tracked changes in the probability of respondents saying that reducing the deficit is a “top priority” from 2016 to 2018. Despite this being a fairly short amount of elapsed time, we speculated that vocal partisans, due to their intense psychological investment in the successes and failures of president from the party that they support, would be most likely to revise their evaluations of budget deficits after the “changing of the guard” from Obama to Trump. Indeed, our other research suggests these psychological processes apply to both Republicans and Democrats equally. Does a newly minted Republican president pacify Republicans as well as inspire deficit-related criticism among Democrats? 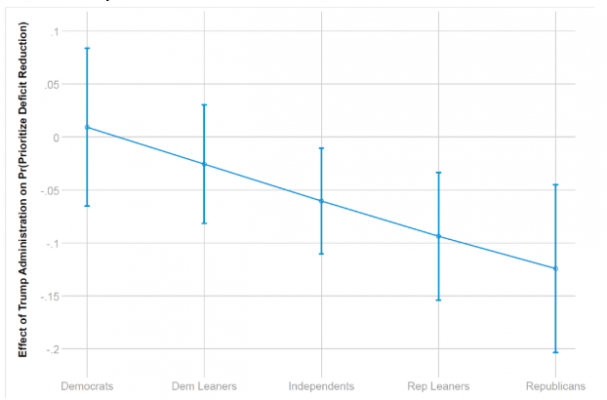 These results strongly suggest that Republicans became less concerned about reducing government debt not because of its actual magnitude, but merely because voicing concern about deficits during a Republican presidential administration would not have looked good for their party.

How would people react to a Covid-19 Response bailout under a Democratic President?

While our recent experimental results also help to affirm this basic pattern, these findings raise an interesting counterfactual question: If a Democratic president were occupying the White House right now instead of a Republican, would she or he have been met with the same level of swift, bipartisan support for a deficit-boosting stimulus package? The answer, based on our findings, is no.

While a few voices on the right have critiqued the current bailout using language evocative of deficits and the debt, the consensus among conservative pundits and observers has been to downplay these side effects. That media environment would be quite different were a Democrat in power, as another of our preliminary analyses demonstrates. Indeed, we find evidence that the media environment helps to explain Figure 1’s results for Republicans. Specifically, conservative media tells partisans when to get mad about deficit spending.

Using data collected from Nexis Uni’s repository of cable news transcripts from the early 2000’s to the present, we compared mentions of the term “budget deficit” on Fox News’ Hannity across the Obama and Trump administrations. The results of this basic keyword search, seen in Figure 2, show a marked difference in the host’s language across the two periods. 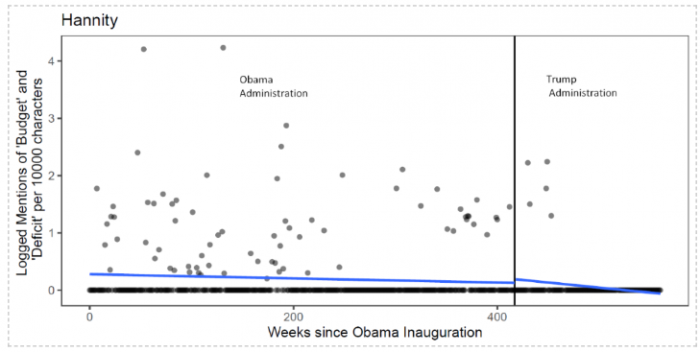 While most of the Hannity segments contained zero mentions of “budget deficit”, there were occasional periods during which the deficit received intense discussion—as captured by the grey points scattered across the area of the plot. However, from before Trump’s inauguration (left of the solid vertical line) to after (right of the line), we see that these periodic bursts of coverage became far less frequent. In fact, only a few months after the transition, mentions of the budget deficit stopped altogether! Hannity viewers were suddenly living in a media environment devoid of any and all budget deficit discussion. Again, this may help explain the relatively lower concern about deficits among Republicans once Trump took office, despite persistent deficit-spending and a ballooning national debt.

Applying these lessons to the Covid-19 stimulus bill is speculative. After all, the Troubled Asset Relief Program of the Great Recession, passed by the George W. Bush Administration, received support from then-Senator Barack Obama and colleagues from both sides of the aisle. Oftentimes the icy grip of partisanship can soften in times of crisis. And, when an eye-popping figure like $2.3 trillion is part of the discussion, we find ourselves in relatively uncharted territory as social scientists.

That said, because Republicans care more about budget deficits when Democrats are in office, the present counterfactual exploration suggests that Republicans would have been far less acquiescent about the stimulus legislation had a Democrat been sitting in the Oval Office.

Scholars will likely analyze the ramifications of the Covid-19 bailout bill for decades to come. But for now, it seems that the consensus surrounding its passage occurred thanks in part to a regular phenomenon, in which deficit hawks turn a blind eye to Republican deficit spending. Perhaps just as “only Nixon could go to China,” only Republican presidents can pass massive stimulus bills.

Ian G. Anson – UMBC
Ian G. Anson is an assistant professor in the Department of Political Science at UMBC. Ian’s recent publications focus on partisan misperceptions, media and politics, and the scholarship of teaching and learning.