Ask a Republican and a Democrat if they think that economy is getting better or worse, and you are likely to get two different answers. But what influences how partisans arrive at their economic judgments? New research by Ian Anson suggests that partisans devote attention to credible, and not overtly biased, information about the economy to form their judgments—but only when it reinforces their preexisting beliefs.

In the midst of a rancorous 2016 Presidential election campaign, even the most casual observer is likely aware that Republicans and Democrats can’t seem to agree on the economic facts. As Donald Trump and Hillary Clinton trade jabs about the state of the economy on Twitter and other platforms, those who identify with either party often echo these starkly contradictory viewpoints. To many Democrats, the post-Recession economy has been slowly but surely chugging towards greater prosperity under President Barack Obama. To many Republicans, the economy is mired in a desperate state of persistent weakness and malaise.

This situation has concerned observers who worry about the future of democratic accountability in the United States. Foundational research on voting behavior showed that the average American possesses a worryingly small reserve of knowledge about the key political issues of the day. This discovery prompted some later researchers to argue that the public need not possess an exhaustive understanding of political debates, actors, and ideologies, so long as they can hold incumbent politicians to account for their past performance in office. If the incumbent President has overseen a deteriorating economy, even the most politically uninitiated will likely have felt the weight of the economic malaise. These low-information voters can team up to “kick the rascal out”, guaranteeing a minimal level of accountability for the President’s performance.

Now we know that partisans can’t agree on the economic facts, which threatens the process of retrospective accountability. How did we get here?

In new research I tested competing expectations about the ways media can exacerbate partisan disagreement on economic matters. The study examines the conditions under which partisans internalize their preferred economic “facts.”

The experiment was conducted as part of the 2014 Cooperative Congressional Election Study, a large survey project that brought together research teams from over 50 universities. The survey consists of a massive sample of more than 50,000 individual respondents across the United States. For my study, I presented 1,000 survey respondents with one of five randomly-assigned stories about the economy. After reading the article, these respondents answered a set of questions tapping their beliefs about the economy. 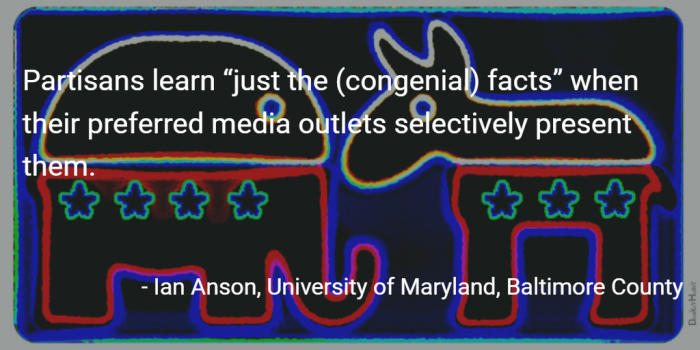 I expected these differences because, when presented with new information, partisans tend to only internalize facts which jibe with their beliefs about the way they think the world should be. When new information is inconsistent with this “partisan preferred world” state, however, the party faithful find ways to rationalize it away.

In a second set of treatment conditions, I exposed partisans to overtly-biased economic news. These stories presented readers with the same positive or negative economic facts as the stories mentioned above. But this time, the stories mentioned President Barack Obama as being specifically responsible for the development. While some would expect this overt language to trigger partisans to engage in even more biased patterns of information acquisition, my contention was that partisans would be hampered by a second motivation: they also seek information that appears to be credible. Partisans would be less likely to internalize overtly-biased information even if it agreed with their partisan predispositions. 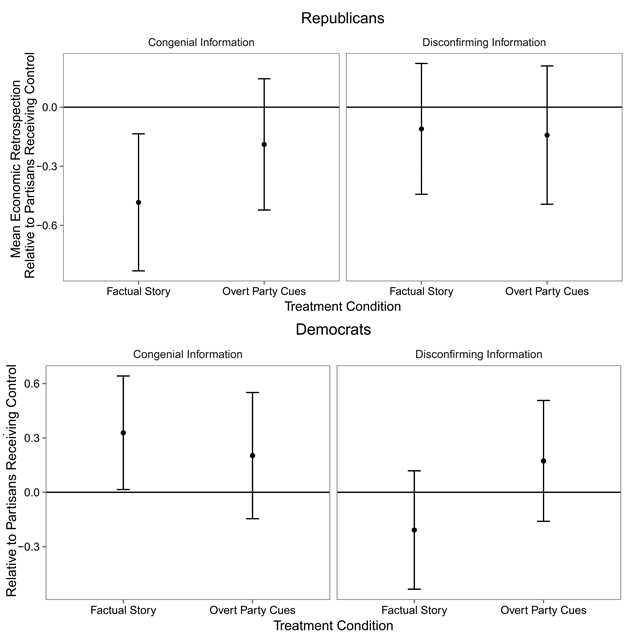 The results of my study showed that partisans were indeed more likely to learn from “congenial” information that fit their preferred version of reality. But interestingly, these effects were only consistent if they were presented without messages containing overt partisan bias.

It appears that the jeers of partisan pundits are not particularly likely to sway the minds of voters away from an objective assessment of the economy. Instead, more subtle forms of bias are the most effective means for biased media outlets to accomplish this task. When ideological media engage in the practice of agenda-setting—carefully curating seemingly credible stories to paint a rosier or gloomier picture of the economy than is warranted by reality—the result is substantially increased polarization in partisans’ factual perceptions.

Despite recent evidence that partisans may be more accurate in their understanding of the economy than their answers on surveys might indicate, my study corroborates recent findings about the power of agenda-setting. While we might be heartened by the notion that partisans seem to value factual presentations over more overtly-biased discussions of the economy, ideological media are armed with an effective method to further erode processes of accountability in American democracy. Partisans learn “just the (congenial) facts” when their preferred media outlets selectively present them.

This article is based on the paper, ‘Just the Facts? Partisan Media and the Political Conditioning of Economic Perceptions’ in Political Research Quarterly.

Ian Anson – University of Maryland, Baltimore County
Ian Anson is an Assistant Professor in the Department of Political Science at the University of Maryland, Baltimore County (UMBC). His research interests include American voting behavior, public opinion, media and politics, inequality, and the scholarship of teaching and learning. Before arriving at UMBC, Ian completed his Ph.D. in political science at Indiana University in Bloomington, Indiana.