During the 1930s, the grocery industry was in the midst of several transformations. Presaging the development of the supermarket in the 1950s, “combination” grocery stores for the first time sold both meat and dry goods such as flour, oil, and coffee. Stores were beginning to adopt the self-service format, first introduced in 1916, which allowed customers to shop without the intervention of the clerk. Large national grocery chains were taking over the industry, inspiring many state legislatures to pass anti-chain-store legislation starting in the mid-1920s

In a recent paper, we use a novel sample of store-level records from the 1929 Census of Distribution to study the advantages of chains and large stores. This survey was the first comprehensive tally of U.S. retail and wholesale operations and includes almost 1,900 grocery-store forms from Washington, DC. We combine these records with microdata from a 1929–1930 Federal Trade Commission inquiry on chain stores that obtained detailed information on store selection and prices.

We use these rich data to paint a picture of the retail grocery industry in Washington, DC, at the start of the Great Depression. The literature on early chain stores has cited various facts about early chain stores, including their lower prices and more “modern” logistics. Chain stores were reputed to have succeeded by standardisation, better site selection, leaner inventory, vertical integration, and private labels.

Standardisation included common store layouts and common product selection. Our analysis confirms some of these but cast doubt on others. In particular, we find that chains carried both a wider range of nationally branded products and more varieties within a product category than independents, but that assortment varied considerably both across chains and, to a lesser extent, within chains.

In addition, chains in our data have low prices, although not all chain stores are created equal: one chain, Safeway, stands out as having particularly low prices. Finally, we show that characteristics of the local population are correlated with chain-store status. Chains tend to be located in Census tracts with fewer competitors per capita, lower black and foreign-born population shares, and smaller average family sizes. All of these are consistent with chains’ greater propensity to weather the Great Depression.

The second contribution of the paper is our analysis of survival rates of grocery stores between 1929 and 1935. The Great Depression represents the most striking episode of a sharp business cycle and large productivity change in U.S. history. Averaged over the whole period from the peak in 1929 to the pre-war peak in 1941, the American economy experienced its fastest rate of productivity growth in its history as shown by Alex Field’s work.

One interpretation of this connection is a Schumpeterian one in which the downturn drives out the least productive producers increasing aggregate productivity in the process. Although there is a substantial literature on productivity and survival in the manufacturing sector during the Great Depression and in general (and some support for this theory), we know very little about retailing, which accounted for 10.6 per cent of national income in 1929, more than agriculture. 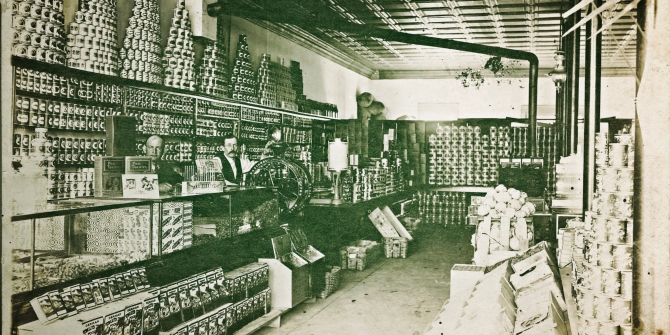 We find that more productive and larger stores survived the Depression at higher rates. Consistent with the growth in store size over the decades, we document positive selection on two measures of store assortment: among chains, combination stores survived at much higher rates than traditional grocers, and among independents, store assortment, a measure not previously used in this literature, was a strong positive predictor of survival. Firm size, in contrast, did not have a uniform impact on survival: small chains had lower survival rates than single-store independents, but large chains’ experience was idiosyncratic and harder to generalise.

Also, consistent with the literature on productivity, labor productivity is a strong predictor of survival. Finally, stores facing more competitors per capita in their Census tract experienced higher exit rates, and there is some evidence that older stores survived the Depression at higher rates.

In the aftermath of the Great Depression and World War II, voters’ and legislators’ appetite for anti-chain-store laws diminished. The supermarket, an expanded version of the combination store, came to the American suburbs, taking advantage of consumers’ suburbanisation, increased car ownership, and desire for one-stop shopping. Our work suggests that the Depression helped set the stage for the major changes in the industry that came soon after.

Authors’ note: Any opinions and conclusions expressed herein are those of the authors and do not necessarily represent the views of the U.S. Census Bureau, nor the position of USAPP– American Politics and Policy, nor of the London School of Economics.  This research does not use any confidential Census Bureau information.

Emek Basker – University of Missouri
Emek Basker is a principal economist at the U.S. Census Bureau and an adjunct professor at the University of Missouri. Her primary area of research is the economics of retail markets and supply chains. Her recent research concerns the impact of innovations and technological changes in the retail sector, including the introduction of barcode scanners and self-service technologies. Since obtaining her Ph.D. in economics from MIT in 2002, she has also held visiting positions at the Federal Reserve Banks of St. Louis and Philadelphia, the University of California-Berkeley, Boston College, and Stanford University

Chris Vickers – Auburn University
Chris Vickers is associate professor of economics at Auburn University, Alabama. He joined the department in 2013 after finishing his Ph.D. at Northwestern University. Dr. Vickers’ research interests are in economic history and applied microeconomics. His current projects include studying manufacturing in the Great Depression and income inequality during World War II.