Production processes are often no longer confined to a single country; supply chains can be fragmented across great distances. By contrast, tariffs are often used by individual countries to protect certain industries. In new research, which studies the effects of US antidumping duties applied against China, Chad P. Bown, Paola Conconi, Aksel Erbahar and Lorenzo Trimarchi find that these protectionist measures can have an effect on supply chains, with firms in downstream industries suffering from increasing production costs and falling employment, wages, sales, and investment.

China has emerged as a world trading power. Thanks to its deep economic reforms beginning in the 1980s, as well as its membership in the World Trade Organization (WTO) since 2001, China’s share of global manufacturing exports surged from 2 to 16 percent between 1990 and 2011, as documented by Acemoglu et al. (2016). Starting in 2018, the Trump administration introduced a series of tariffs on imports from China, triggering retaliation and a debate on the effects of this “return to protectionism.”

However, the United States has targeted China with special tariffs for decades, long before Donald Trump took office. The main trade policy instrument has been antidumping (AD) duties, the most common trade barrier used by the United States and other WTO members. From 1988 to 2016, the average US AD duty against China more than tripled, from 45 to 148 percent (Figure 1). Under President Trump, this duty further increased to 166 percent. 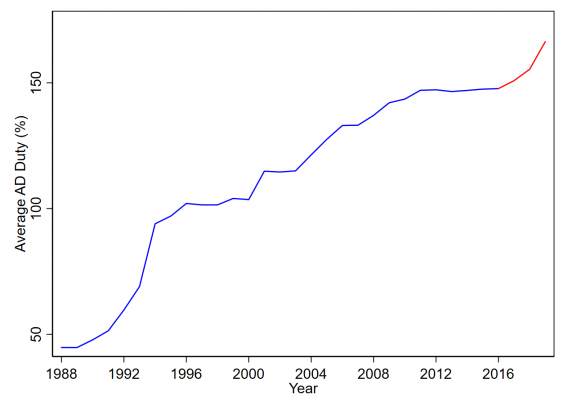 Notes: The figure plots the average AD duty applied by the United States on imports from China during 1988-2016 (in blue) and during Trump’s presidency in 2017-2019 (in red). Source: Authors’ calculations based on an extended version of the Temporary Trade Barriers Database of Bown (2014).

Global supply chains and increased trade in intermediate goods also emerged over this thirty-year period. In a world in which production processes are fragmented across countries, the effects of tariffs propagate along supply chains, with firms in downstream industries suffering from protection upstream. For example, some producers have complained that Trump’s tariffs on steel and aluminium have put their “plans to expand on hold, costing American jobs.”

In new research we examine the effects of trade protection along supply chains. Our main focus is on AD duties applied by the United States against China – its most frequent target – during the 1988-2016 period. Our work relies on detailed information on US AD duties and other forms of protection, combined with disaggregated US input-output data that is used to identify vertical linkages between industries. We find that tariffs have large negative effects on downstream industries, increasing production costs, and decreasing employment, wages, sales, and investment. 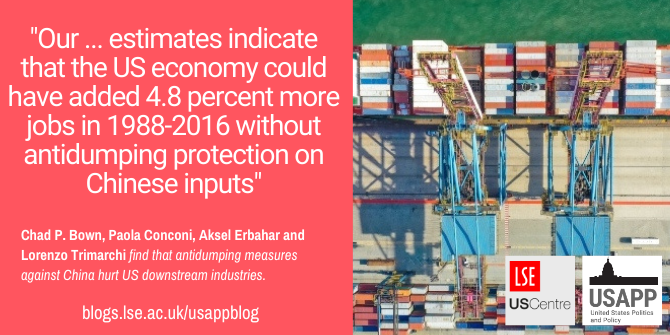 Photo by Sergio Souza on Unsplash

Previous studies provide an economic rationale for allowing flexible protectionist measures such as AD duties in trade agreements (see Bagwell and Staiger, 1990; Bown and Crowley, 2013): the ability to protect industries in the face of import surges can act as a “safety valve,” allowing countries to sustain trade policy cooperation.

As pointed out by Daniel Trefler in an influential study, a key challenge to identify the effects of tariff changes is the endogeneity of trade policy. When studying the impact of tariffs along supply chains, a major concern is that the results might be confounded by other factors that are linked to both the level of protection in upstream industries and the performance of downstream industries.

For example, when foreign suppliers of product inputs are able to produce at lower cost, this can benefit US firms in downstream sectors and also increase input protection (e.g., making it easier for an industry that petitions for antidumping measures to provide evidence of injury). Omitting these productivity shocks would thus work against finding negative effects of tariffs along supply chains.

To deal with endogeneity concerns, we use an instrumental variable approach. Our instrument is the interaction between an industry’s historical experience at filing AD petitions and its importance in America’s politically important battleground states. The logic of our identification strategy is that AD protection should be skewed to favor industries that are important in swing states, but only if they can exploit this political advantage thanks to their prior knowledge of the complex procedures to petition for AD duties.

The first component of our instrument builds on previous studies emphasizing the legal and institutional complexity of the AD process (Blonigen and Park, 2004; Blonigen, 2006). As a result, industries with prior experience at filing AD cases face lower petitioning costs and a higher probability of success in new cases.

The second component builds on insights from the literature on the political economy of trade policy. Several studies show that US trade policies are biased toward the interests of swing states (see, for example, Conconi et al., 2017).

Our research provides evidence that swing-state politics influences US AD protection. We show that representatives from swing states have a disproportionate share of seats on the two key committees that oversee US trade policy in Congress. These committees can impact decisions of the International Trade Commission (ITC) – one of the two key government agencies tasked with administering US antidumping – through various channels (e.g., appointment confirmations, budget allocation, and oversight hearings). Indeed, we find that ITC commissioners are more likely to vote in favor of antidumping (AD) when the petitioning industry is important in swing states.

Our analysis emphasizes the importance of dealing with the endogeneity of trade policy. If we ignore this concern, we find no systematic effect of tariffs along supply chains. When instead we instrument for trade policy, we find that higher tariffs have large negative effects on downstream industries.

Effects of protection in downstream sectors

Our main results concern the effects of protection on employment. We show that AD duties decrease the growth rate of employment in downstream industries, with no significant effect on protected industries. In terms of magnitude, our baseline estimates indicate that the US economy could have added 4.8 percent more jobs in 1988-2016 without AD protection on Chinese inputs. The most negatively affected sectors were large non-manufacturing industries (e.g., construction), which intensively rely on inputs that were highly protected (e.g., steel).

Beyond employment, we also show that tariffs have negative effects on other key economic outcomes. For example, they also significantly decrease the growth rate of wages, sales, and investment in downstream industries. The mechanism behind the negative effects of tariffs along supply chains is that AD duties decreased US imports of targeted products from China and increase prices, thereby increasing production costs for downstream industries.