Since 2001’s 9/11 attacks, Americans have had to live with the increased threat of terrorism. But how can governments reassure their citizens who may be understandably anxious about potential terrorist attacks? In new research, Aaron M. Hoffman finds that while being reminded about terrorism makes people more anxious, they can be reassured when shown evidence of their government’s effective counterterrorism policies.

Evaluate, plan, remediate. This well-known formula is designed to prevent the onset of toxic worry. Unfortunately, it does not seem to work very well when terrorism is the source of people’s anxiety.

Individuals are not especially well-equipped to protect themselves from terrorists. As a result, their anxiety about terrorism tends to spiral out of control. Instead of responding sensibly to what is really a minor threat, people react to terrorism in ways that frequently do more harm than good: avoiding foreign travel, trading liberties for greater security, picking charismatic candidates over qualified ones, and supporting hawkish foreign policies that often backfire on their users.

In recent research, William Shelby of Purdue University and I argue that governments can reduce the psychological effects of terrorism by reassuring people about their safety. The key is for governments to emphasize the effectiveness of their counterterrorism efforts.

Governments used to think it was possible to reassure citizens about national security threats. Prior to World War II, for example, the British government’s Ministry of Information created the slogan, “Keep Calm and Carry on” for use in the event war broke out. Modern analysts, however, are suspicious of these morale boosting efforts. Messages about security from terrorism, they say, inevitably remind people that danger lurks. The color-coded warning system the US federal government deployed after the 9/11 attacks, for instance, made people more nervous about terrorism, not more vigilant.

The idea that governments are unable to reassure citizens when terrorism is at issue is contradicted by research that suggests some counterterrorism information makes people feel more secure. Israel’s targeted assassination program calmed the Israeli stock market when Israel’s attacks focused on members of the military wings of Palestinian terror organizations. Television news reports about counterterrorism are associated with increases in public trust in government.

We argue that people feel more secure when they believe that governments are degrading the capacity of terrorists to do harm to others. When governments confront terrorists ineffectively, however, people express more insecurity. 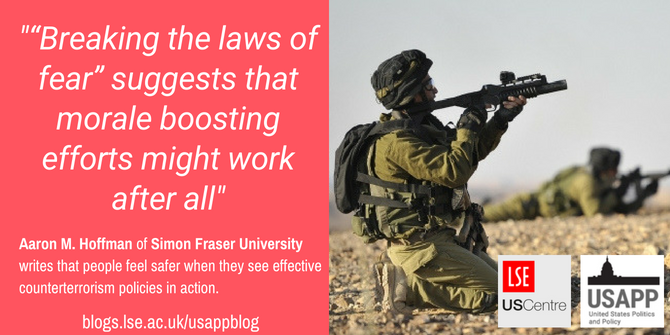 We used three separate experiments to test this argument. The first examines the effects of a news story we wrote about terrorism prevention efforts on a University campus. The story was inspired by threats issued against the University of Pittsburgh in 2012. Experiments two and three used material produced by the Israeli military and released via social media about its counterterrorism efforts. In Study 2, we showed participants an announcement the IDF (Israeli Defense Force) made after assassinating a senior member of Hamas’ military. In Study 3, we showed participants a video depicting an IDF counterterrorism training exercise.

In all three studies, messages about effective counterterrorism increased people’s confidence in their government’s ability to protect them from terrorist attacks. In addition, we found no evidence in any of the studies that discussions of counterterrorism made people more insecure.

The results of Study 3 are especially telling. Everyone in the study was asked about their willingness to travel to Israel after being randomly assigned to one of three conditions: 1/3rd of our participants watched a CNN video about a terrorist attack on a bus in Israel; 1/3rd watched the CNN video, followed by the IDF counterterrorism training video described above; the remaining participants, our baseline group, saw no videos at all.

As we thought, people who saw just the CNN video about terrorism expressed the least interest in traveling to Israel. In contrast, those in our baseline condition and those who watched the CNN and IDF training videos expressed significantly more interest in traveling to Israel. These results make sense: people who either do not have terrorism immediately on their minds or have been reassured about their safety from attack are less concerned about traveling abroad than people who are reminded of terrorist threats.

Figure 1 – Average willingness to travel to Israel by study groups 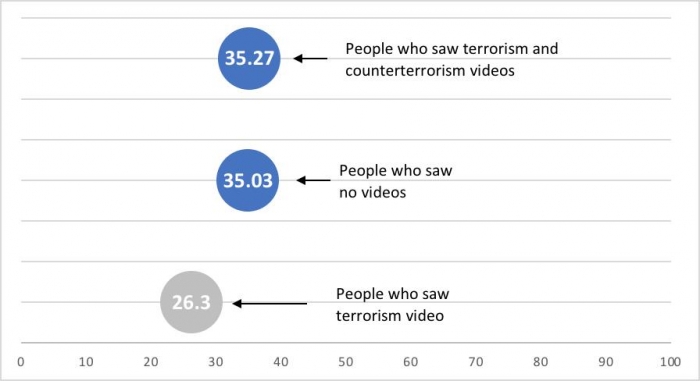 The implications of these results are important. Taking the terror out of terrorism has long been seen as a theoretically attractive, but impractical way of countering terrorist activity. “Breaking the laws of fear” suggests that morale boosting efforts might work after all. “Keep calm and carry on” campaigns may be a thing of the past, but governments may be able to talk about effective counterterrorism in reassuring ways. When it comes to terrorism, the laws of fear may not be so ironclad after all.

Aaron M. Hoffman – Simon Fraser University
Aaron M. Hoffman is Associate Professor of Political Science at Simon Fraser University. He received his Ph.D. from the University of Pittsburgh in 2001. His current work examines the political impact of media coverage of terrorism and counterterrorism and the forces that shape that reporting. He is the author of Building Trust: Overcoming Suspicion in International Conflict (2006) as well as articles in journals such as Political Research Quarterly (2017; 2013), Conflict Management and Peace Science (2016), The Journal of Conflict Resolution (2013), Terrorism and Political Violence (2010), and Personality and Social Psychology Bulletin (2007) among others.