For the past five years, the Black Lives Matter movement has attempted to tackle the systemic racism present in the US which dehumanizes and devalues the lives of its black citizens. Dewey M. Clayton writes that Black Lives Matter has a number of important parallels and differences with the Civil Rights Movement of the 1950s and 1960s. Using evidence from a content analysis of the New York Times he argues that Black Lives Matter can take lessons from the Civil Rights Movement in order to reframe its grievances and achieve mainstream political acceptability and then change at a national scale.

The legacy of slavery and Jim Crow laws have left a residue of systemic racism in the United States that has devalued the lives of African Americans.  Black Lives Matter (BLM), a social movement rooted in the collective, and individual, experience of black people in this country, encourages active resistance to the continuing dehumanization and devaluation of their lives.  Like other movements that preceded it, such as the Tea Party Movement, and Occupy Wall Street, “Black Lives Matter is anchored in the physical occupation of public space and amplified by social media.”  As a grassroots organization, Black Lives Matter has grown from a hashtag to a network that now encompasses over 30 chapters in the United States and other countries.  Building on strategies used by the Civil Rights Movement in the 1960s, BLM engages in nonviolent direct action to bring attention to police killings and abuse of African Americans.

There is a continuous struggle for human equality for African Americans in the United States. The Black Lives Matter Movement also confronts some of the same issues that previous black liberation movements addressed: black people are seen as criminal, and black bodies as expendable. Both movements have been opposed to racism and systemic oppression. Many see BLM as the new civil rights movement. That movement, from 1954 to 1965, demanded basic equality for African Americans. Black Lives Matter has focused on police abuse of African Americans. To that end, it is instructive to examine the similarities and differences between the Civil Rights Movement and the Black Lives Matter Movement.

Black Lives Matter and Civil Rights: both movements of their time

Not unlike the college students of the 1960s, the young activists of the Black Lives Matter Movement are being criticized by African Americans and white people alike as also being too militant.  Author and Civil Rights Movement activist Barbara Reynolds wrote that she finds it hard to get behind Black Lives Matter.  She drew a contrast between the civil rights protesters in the 1960s and the Black Lives Matter protesters of today; “… at protests today, it is difficult to distinguish legitimate activists from the mob actors who burn and loot.”  Additionally, Black Lives Matter has been criticized for some of its extreme forms of civil disobedience, from “disrupting the St. Louis Symphony, to interrupting presidential campaigns . . .”

Black Lives Matter though considered as continuing the struggle for black liberation where the Civil Rights Movement left off, is indeed similar in many ways but vastly different in others.  Because of the relative infancy of Black Lives Matter, it is difficult to make a complete comparison with the Civil Rights Movement.  One major difference, however, is the leadership structure of the two organizations.  Black Lives Matter has rejected the Civil Rights Movement’s “hierarchical style of leadership, with the straight black male at the top giving orders.” As a movement, it is highly decentralized and unstructured.  Political scientist Fredrick Harris has noted, “In some ways, the new tools of technology—particularly social media and especially Twitter—have facilitated the emergence of just such a bottom-up insurgency led by ordinary people, and have displaced the top-down approach of old guard civil rights organizations.”

“DOA.MarchToChinatown23.WDC.19January2015” by Elvert Barnes is licensed under CC BY SA 2.0

Moreover, Black Lives Matter “gives special attention to the needs of black queers, the black transgendered, the black undocumented, black incarcerated, and others….” In fact, three women founded the movement.  Conversely, the Civil Rights Movement of the 1950s and 1960s was male-dominated.  Black Lives Matter is decentralized and encourages leaders from all communities.  The civil rights movement grew out of the leadership of the African American church and engaged in respectability politics.

However, Black Lives Matter wants to move beyond respectability politics.  During the Civil Rights Movement, respectability politics “commanded black elites to ‘lift as I climb,’ or to prove to white America that blacks were worthy of full citizenship rights by getting the untalented nine-tenths to rid themselves of bad customs and habits.” As a social movement, Black Lives Matter would just as soon challenge the mainstream values, by welcoming the multiple identities that coexist within the movement: class, race, gender and sexuality.

The legal achievements and articulation of black grievances in terms of “equal rights” paved the constitutional ground on which African Americans could begin to demand change.  This articulation of the black struggle as a matter of equal rights was a strategic tactic: it provided a context to frame the myriad issues faced by black people. Moreover, the Civil Rights Movement framed the confrontation between nonviolent peaceful protesters and volatile southern police chiefs with dogs and firehoses as a fight between good and evil.  To date, Black Lives Matters in its issue framing has yet to appeal to mainstream America and convince them its concerns are part of the national identity.

To further my comparative analysis between the two movements, I conducted a content analysis of the New York Times coverage over a two-year period to determine whether its coverage was more favorable to one group or the other. I hypothesized that the Black Lives Matter Movement received less favorable media coverage than the Civil Rights Movement.  Next, I identified newspaper articles about both movements based on whether they contained institutional criticism statements or human rights statements.

Black Lives Matter can take a lesson from the Civil Rights Movement to recognize that it is possible to expand its own boundaries and move from being politically unacceptable to acceptable. It is the purpose of social movements to be disruptive, to use combative tactics, and to interrupt business as usual. Enough time has yet to pass to be able to evaluate how effective Black Lives Matter will be in ending police brutality against black people in America.  But like the small victories in the early days of the Civil Rights Movement, it has already had an impact.

Dewey Clayton – University of Louisville
Dewey Clayton is a Professor of Political Science at the University of Louisville. He earned his Ph.D. in political science from the University of Missouri-Columbia. His research and teaching interests include American politics (electoral politics, redistricting, civil rights law, and African American politics).  He has published articles in leading journals, such as the Journal of Black Studies, and the Black Scholar.  He is the author of African Americans and the Politics of Congressional Redistricting (2000), which examines the congressional redistricting process.  Additionally, he is the author of The Presidential Campaign of Barack Obama:  A Critical Analysis of a Racially Transcendent Strategy (2010), where he analyzes how the first African American was able to transcend race and win election to the highest office in the United States. 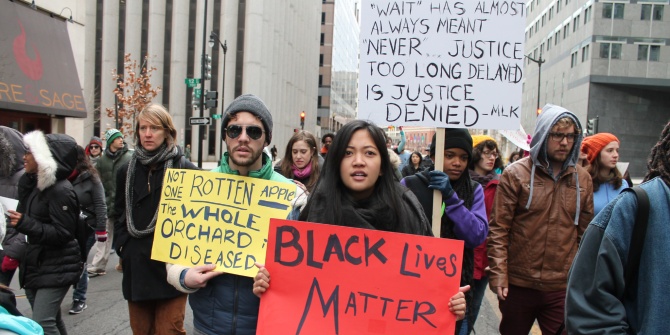