In theory, political candidates who have the widest appeal are the most likely to win elections. But recent decades have shown us that this is decidedly not the case: polarization now means that quite extreme candidates win elections in many districts. Mattias Polborn uses a new model of legislative elections and finds that extreme candidates are likely to prevail if the positions of national politicians and parties are important factors for voters.

In his famous book “The Wealth of Nations,” Adam Smith suggested that competition between profit-motivated agents brings about good, efficient, outcomes for the agents that populate the economy. “It is not from the benevolence of the butcher or the baker that we expect our dinner, but from their regard to their own self-interest.”

Does a similar result obtain for political competition? More specifically, does competitive pressure — i.e., the need to win the election against an opposing candidate — force candidates to propose good policies, or do voters rather have to rely on the benevolence of political candidates (in which case we really should not hold our breath)?

The most fundamental result in the theoretical analysis of elections argues that competition indeed forces moderation. The “median voter theorem” states that, in elections with two candidates, both have to choose positions that appeal to the voter who represents the middle point of all voters’ political views. Then, after both candidates adopt such a compromise position, all voters are indifferent between them, and both candidates have the same chance of winning.

Yet, in reality something appears to have gone wrong with these predictions: For the last 40 years, polarization between Republicans and Democrats in US Congress has increased dramatically, and in a large majority of districts, which party will represent the district is rarely in doubt.

Our new model analyzes the logic of political competition in legislative elections, such as those for Congress or for state legislatures. We stipulate that voters generally decide who to vote for not just based on their local candidates’ positions, but also on the positions of national politicians and parties, even though they are not explicitly on their ballot.

To see why, let’s think about a district in which the median voter is somewhat conservative. The median voter theorem would call for such a district to elect a somewhat conservative representative, who, however, could be either a Republican or a Democrat. But what if voters care about both the local candidates’ own positions, and the positions of their respective national parties?

However, more importantly, the Republican primary voters do not need to nominate such a moderate compromise candidate: They can nominate a candidate, let’s call him Mr. Wingnut, who is more conservative than the moderately-conservative district median voter. 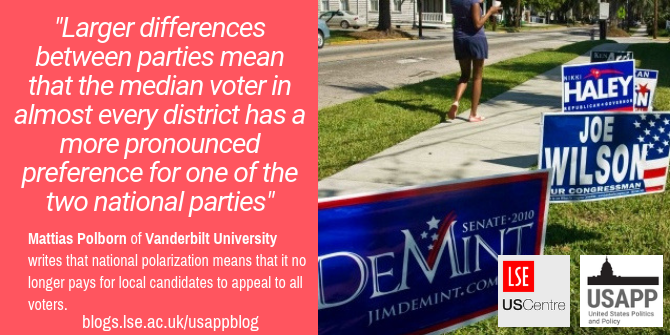 “Republican election yard signs” by TheDigitel Beaufort is licensed under CC BY 2.0

To show that Mr. Wingnut could win against the most competitive possible candidate that the Democrats can field (Ms. Bluedog, a somewhat conservative Democratic candidate espousing exactly the median voter’s preferred positions), consider the following argument: “Yes, Ms. Bluedog is a reasonable person. But, as a Democrat, she will also vote to make Nancy Pelosi Speaker of the House, and you know what would happen then.” If the latter is sufficiently important to the district median voter, Mr. Wingnut can be somewhat, possibly substantially, more conservative than the median voter would like and yet win his vote.

National polarization – the bigger differences between the two parties’ national positions — allows more and more extreme candidates to win in each district. This is the case because larger differences between parties mean that the median voter in almost every district has a more pronounced preference for one of the two national parties, and that party’s local supporters can exploit this preference by nominating a more extreme candidate who still wins. With more liberal Democrats and more conservative Republicans winning in every district, the national positions will move farther apart, generating a vicious cycle of polarization.

How did national polarization intensify? Many political practitioners suspect that gerrymandering is a major culprit. In the attempt to increase the number of Congressional districts that their own party can win, state legislative majority parties generally try to create a few districts in which they pack as many supporters of the opposing party as possible, and a larger number of districts in which their own party has a substantial, though not overwhelming advantage.

The effect of the super-packed districts is not just that they are vote sinks for the opposing party. These districts also elect fairly extreme representatives that then participate in defining their party’s position in Congress. This, in turn, serves as a useful strawman to convince voters in moderately-leaning districts not to vote for a moderate opposition candidate — a variation of the “Look, she is with Nancy Pelosi” argument detailed above.

Second, voters appear to behave differently in legislative and executive elections, in a way that makes the former less competitive than the latter. In US Senate and gubernatorial elections from 1974 to 2012, a one-percentage point shift in a state’s presidential vote — a standard measure for the state’s ideological leanings — has an effect that is almost twice as large on the vote outcome in a Senate election as in a gubernatorial election.

This makes sense in our theoretical framework: When voting for a Senate candidate, voters are much more likely to weigh party affiliation because a Senator is not able to implement policy just on his or her own. In contrast, Governors often cultivate an air of independence from their own party, and there are many examples of moderate candidates elected in states that are ideologically-unfriendly territory for their party.