“Better than the Walmart parking lot”: Valle, Arizona epitomizes the extreme poverty that is the dark side of the American Dream

“Better than the Walmart parking lot”: Valle, Arizona epitomizes the extreme poverty that is the dark side of the American Dream

The ideal of the American Dream encapsulates the US’ founding ideals of freedom of opportunity and the promise of upward social mobility. But what happens to those for whom that dream has failed? Since 2013, Susannah Crockford has been visiting Valle, Arizona, where many residents live on the margins of society in extreme poverty. She writes that, like many of America’s poor, Valle’s most vulnerable are victims of a spiraling cycle of misfortune that they may never emerge from.

In December 2017, the UN’s Special Rapporteur on extreme poverty and human rights, Philip Alston, released a report on the United States in which he stated that the world’s richest and most powerful nation was doing very little to address conditions for the poor within its own borders. Alston highlighted higher infant mortality rates, lower life expectancy, lower doctor to patient ratios despite high healthcare expenditure per capita, higher obesity rates, higher incarceration rates, and higher child poverty rates compared to other OECD countries. In the conclusion to his report, Alston commented that, “the American Dream is rapidly becoming the American Illusion since the US now has the lowest rate of social mobility of any of the rich countries.”

With a population of just 832, census-designated Valle, Arizona exemplifies the extreme poverty that lurks on the margins of American society that so shocked the UN’s representative. According to US Census Bureau data, 57.4 percent of the population lives below the poverty level. I know Valle well; I’ve been visiting there since 2013 to undertake ethnographic fieldwork. Residences are mostly self-built with varying levels of safety and amenities, and consisted of mobile homes, RVs, shacks, tents, teepees, and in one case converted grain silos. One resident described his acre of land where he parked his RV and had built a simple wooden shack as “better than the Walmart parking lot”. During my time there, I saw that the occupants of Valle were mostly retirees and people living on low incomes, some were ex-law enforcement or ex-Park Service employees (the Grand Canyon National Park is thirty miles to the north), a few self-defined as survivalists, stockpiling guns, food, and other resources in expectation of an imminent collapse of society.

The centre of Valle is an intersection of two highways. Here sits the main ‘development’ of the place: two petrol stations, a Flintstones-themed campground, a rock shop, a small private airport, an air museum, a water station, and a motel. These businesses are all geared towards providing services to tourists on their way to the Grand Canyon, which are in far greater number in the summer months than the winter. This means the few jobs that there are locally are seasonal, low paid, with few benefits. There is no grocery store for at least thirty miles, making Valle a food desert. A food bank operates once a month, when a truck parks in the campground and crates of vegetables and dry goods are given out to anyone with an address in Valle.

Beyond this central intersection there is no connection to sewers, no running water, no electricity grid, and no garbage removal. People live on undeveloped land entirely off-grid. However, even this type of land can be difficult to purchase by people with poor credit ratings and no savings. A Valle resident, who I will call Tom, bought an acre of land in Valle that was valued at $1500 in 2013. He bought his acre on a rent-to-own agreement for a $200 deposit with monthly payments of $150 over a period of five years, resulting in a total payment of $9000 for an acre worth less than one fifth that amount. For the poor in America, this can be the only way to buy land, often described to me by my informants as the start of the American dream.

Tom had only rudimentary sanitation on his land, digging a latrine-style pit for a toilet. He lived in a converted barn, with solar panels for low wattage appliances such as his phone and TV. However, he could not run a fridge reliably, resulting in frequent spoilage of fresh food. He hauled in potable water from the pumping station in Valle using a pickup truck with a trailer, and stored it in a tank. In the winter the hoses and connectors would often freeze rendering him unable to fill up his propane-fuelled shower without carrying three gallon jugs of water by hand. The only way to get water and remove garbage was with his truck, meaning any breakdowns could be devastating leaving him with garbage piling up, no access to clean water, and hitchhiking to get to the nearest town to buy food. 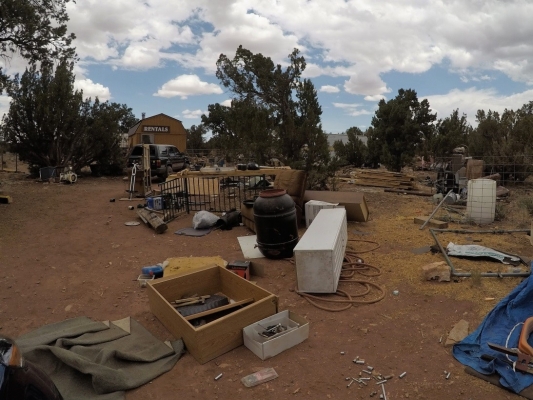 Tom considered himself lucky to have his land in Valle. With two felony convictions, he was barred from most forms of employment and many residential zones. He worked occasionally in construction or food service, usually under the table, and rarely filed taxes. Years of accumulated medical, student, and consumer debt meant that if he did file taxes or acquire legal work, much of his wage packet was garnished for repayment. This meant it was not in his financial interest to work legally. As a felon, he was unable to vote and he exhibited little interest in political participation.

Like many poor people in America, he was vulnerable to spirals of misfortune. An accumulation of parking tickets resulted in him losing his driving license at age 19, he had to sell his car and truck, and then was forced to walk or catch rides for the next eight years as he was unable to pay the $390 in fines to get it back. In rural Arizona, there is little in the way of public transport so the loss of a vehicle can mean the loss of the ability to earn an income. In the past year, he accidentally signed up for an Amazon Prime membership, which he did not have enough money in his account to pay for; he went overdrawn, and the subsequent fees meant the loss of his bank account. 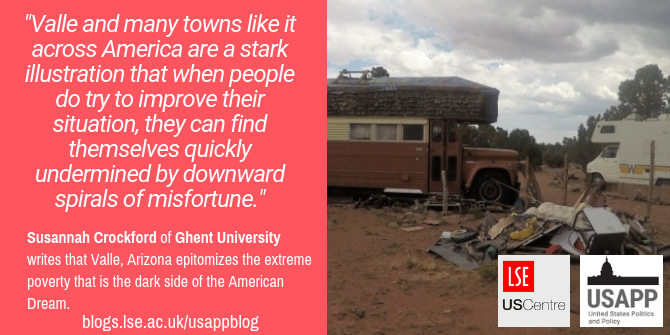 Even in Valle, there was a relative gap between better and worse-off residents. Tom called himself “middle class” by Valle standards. He had a well-built barn, which was sealed to rain and snow, and solar powered Christmas-lights decorating his trees. One of his neighbors, Denise, lived in an old bus with holes in the roof that leaked when it rained. She worked as a cleaner at one of the lodges in the Grand Canyon. However, she struggled with problems with alcohol and drugs. Some neighbors came over to ‘help’ her, and stole from her because she was old and they knew she would not call the police. As a “known tweaker” in the neighborhood, she knew from experience that calling the police would likely only result in her own arrest. She had lost a child under circumstances she could not bring herself to talk about. She suffered from seizures. She had purchased an RV to leave Valle and get away from her situation, to pursue a better life, but she never managed to leave. She was under the influence methamphetamines when she had a seizure on the side of the highway. A car hit her, and she died. Her mother came and took anything of value from the bus. An ex-boyfriend was slowly taking away the other things, piece by piece. The bus remains in the wilderness, rotting in the open air. 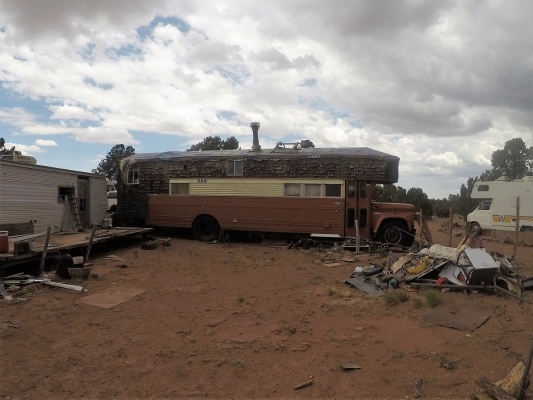 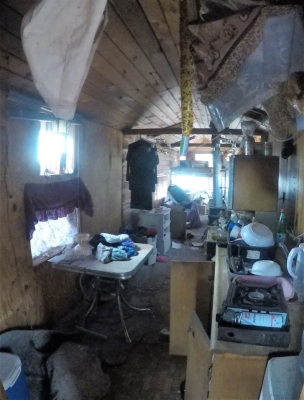 What is the American Dream for people like Tom and Denise? The ideal of the American Dream is hope in moving up the ladder, but the US has the lowest social mobility levels among developed nations. There are numerous structural barriers in place against the poor that prevent them from improving their situation including the lack of access to credit, residential zoning laws, regulations concerning debt collection, and inequitable access to healthcare and the criminal justice system. Valle and many towns like it across America are a stark illustration that when people do try to improve their situation, they can find themselves quickly undermined by downward spirals of misfortune. These same spirals do not occur with the same frequency or impact to those with more resources. The American Dream is often dependent not on individual grit, but on material conditions of socioeconomic class.

Susannah Crockford – Ghent University
Susannah’s research interests center on the use of ethnography to explore narratives of spirituality, millenarianism, and climate change. She currently works as a post-doctoral researcher in the European Research Council funded NARMESH project in the Literary Studies department at Ghent University. Her PhD thesis, After the American Dream: Political Economy and Spirituality in Northern Arizona, was awarded in July 2017 by the LSE. Following on from this, she spent nine months as a Research Officer in the non-profit research group, Inform (Information Network on New Religious Movements), located in the LSE. Previously, she completed degrees at the University of Cambridge and the University of Amsterdam.