Out of 35 US Senate elections this year, Arizona’s is one of only three without an incumbent. Barbara Norrander and Lisa Sanchez write that the contest between US House Representatives Republican Martha McSally and Democrat Krysten Sinema is a close and hard fought one, with both going negative in their campaigns. While this negativity may energize both party’s respective bases, they argue that it may turn off independent voters – a group both candidates need if they want to head to Washington DC in January 2019.

Arizona’s Senate election is one of only three open-seat Senate contests in 2018. When no incumbent is running, the election is usually more competitive. A victory in Arizona is essential if the Democrats hope to gain majority party status in the Senate. Gaining majority status, however, is an uphill battle for the Democratic Party. Democrats need to retain their current seats, a task that is hampered by Democrats defending 26 seats compared to nine for the Republicans. Further, ten of the Democratic seats are in states won by President Trump in 2016. Democrats must pick up two seats to overcome the current 51-49 Republican advantage in US Senate. (In a 50-50 tie, Vice President Pence would decide the majority status for the Senate). With Arizona’s open seat race listed as a toss-up by most analysts, Arizona’s Senate race is being closely watched by both parties.

Facing off in Arizona’s Senate election are two women who currently serve in the US House of Representatives. Republican Martha McSally was the first female combat pilot in the US Air Force. She has served two terms representing a southern Arizona district that is evenly split between Democratic and Republican voters. Similarly, Democrat Krysten Sinema is a three-term House member from a competitive district in the Phoenix area. Both candidates are seasoned campaigners, and both won close races in the past: McSally won her first term in the House by 167 votes, and Sinema’s margin of victory in her first House race was by 4 percentage points.

The Arizona Senate race is being hard fought, and the tone of the campaign is frequently nasty. Much of the negative campaigning is coming from outside groups. While Sinema raised $15.7 million by mid-October and McSally garnered $12.5 million in donations, outside groups spent $41.8 million across the primary and general-election phases.  Both national parties engaged in independent expenditure campaigns through the Democratic Senatorial Campaign Committee and the National Republican Senatorial Committee. In addition, national Democratic-leaning groups such as Majority Forward and Priorities USA Action ran negative campaigns against McSally. The super PAC Defend Arizona, funded both by conservative Arizonans and Senate Majority Leader Mitch McConnell’s Senate Leadership Fund, helped McSally defeat Kelli Ward and Joe Arpaio in the Republican primary, and in the general election turned their attention to attacks against Sinema.

Martha McSally wants to run her campaign focused on her background as a military pilot with a strong record on border security, national security and more limited government. Krysten Sinema began her campaign by describing herself as a moderate who can work across the partisan aisles for issues such as health care, creating new jobs and protecting veteran’s benefits. Negative campaigning has overtaken these themes. Sinema has been attacked for her more liberal record and statements from her time in the Arizona state legislature (2005-2012). Old video and pictures have been used to frame Sinema as too liberal for Arizona. McSally has been criticized for adopting more conservative positions and becoming more vocal in her support for President Trump in order to win the Republican primary. During the general election campaign, Trump disappeared from McSally’s general-election ads. However, she continued to tout her connections to the President in campaign events, where the audience is more likely to be fill with Republican voters. Trump publicly endorsed McSally at an Arizona campaign rally on October 19th. With her movement toward more conservative positions, McSally has been attacked for being a flip-flopper. Both candidates feels that the attacks on them are unfair and engaged in counter attacks. 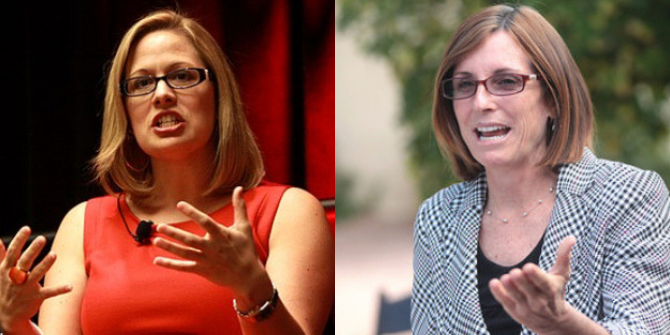 For decades, Arizona has been considered a Republican stronghold. However, with the rising Latino population (31 percent) and a falling non-Latino white population, the politics of the state are realigning. Arizona Senate seats were once considered “safe” Republican seats but this may no longer be true. The changing demographics of the state go far in helping to explain the more competitive state politics. Still, despite these population statistics, Arizona’s Latinos are less likely to vote for multiple reasons. Most importantly, only 47 percent of the Arizona’s Latino population is eligible to vote based on the basic requirements of age and citizenship. This number falls to 41 percent when age, citizenship status and voter registration are all taken into account. Another reason for a lack of turnout among Latinos is that they are less likely to be contacted by politicians and parties.  An October survey by Latino Decisions founds that the majority of Latinos had not been contacted by either group in 2018.  However, once Arizona’s Latino are registered to vote, they turnout in strong numbers with a reported turnout rate of 83 percent in the 2016 election.

Arizona Latinos share many of the same issue concerns as other voters with their top three priorities being immigration, education and healthcare.  However, the perspective of Latinos on these issues can differ from other Arizonans.  Fifty-three percent of Latino registered voters believe that Arizona is unfavorable toward immigrants compared to 48 percent of non-Latinos.  Latinos in Arizona also differ in their views on President Donald Trump.  Sixty-eight percent of Latinos disapprove of the president compared to 48 percent of the non-Latino white population.  All of this combines to make Latinos to be less likely to support McSally’s bid for the Senate.  Only 21 percent of potential Latino voters in Arizona indicate they intend to vote for McSally versus 46 percent of non-Latino white voters (14 percent of white voters and 22 percent of Latino voters were undecided in the September survey).  Given the disparities in vote choice, support of the incumbent president, and views of immigration policy, the Arizona Senate election is likely to be a numbers game. It will depend on who turns out to vote: Latinos, non-Latinos or both.

Arizona’s 2018 Senate campaign has been hard-fought.  Negative tactics have dominated the race.  The purpose of these negative tactics is to mobilize the party’s base supporters by demonizing the opposition candidate.  Political scientists Samara Klar and Yanna Krupnikov, however, argue that such tactics can turn off independent voters.  In this close election, who turns out to vote will decide the election, whether it be partisans, independents, Latinos or Anglos.  However, for many Arizona voters the race will soon be over. Three-quarters of Arizonans will vote early, either by mail or at an early voting site.

Lisa Sanchez – University of Arizona
Lisa Sanchez is an assistant professor in the School of Government and Public Policy at the University of Arizona.   Her research focuses on the relationship between a rising US Latino population and its electoral impacts within the United States Congress. She works on projects related to the intersection of legislative politics, race and ethnicity, political behavior, and legislative policy.