This year’s midterm elections are some of the most important in living memory – but what are the US Congress, and Donald Trump’s presidency, likely to look like after all of the votes are counted? LSE US Centre Director, Peter Trubowitz foresees two likely scenarios – that the Republican Party is able to hang on to both the US House and Senate, thus strengthening the president’s position and resolve, or that the Democrats will regain at least one of those legislative bodies. Unless they are able to do just that, he writes, the Democratic Party will face some existential questions about what path to take next.

Here we are less than one week out and with a great deal of uncertainty about how things will look come November 7 — the day after the midterm election.  As you know, the midterms are held every four years, roughly halfway into a president’s term. Federal offices are up for election: all 435 seats in the House of Representatives and one-third of the 100 seats in the Senate.  In addition, 36 of the 50 states elect their governors during the midterm cycle and many states elect their state legislatures as well as mayors and other officials at the municipal level.  Normally midterm elections are low turnout affairs, with only about 40 percent of the electorate casting votes. Typically, the president’s party loses seats in Congress during the midterms.  Barack Obama saw this happen in 2010 and 2014, as did George Bush in 2006.  As we count down to the election, the big question is whether the Trump and the Republicans will beat the odds.

In the House, which is getting most of the attention in the media, it is unlikely that they will beat the odds.  The non-partisan Cook Political Report currently rates 75 of the 435 seats in play as vulnerable to takeover — to switching party hands.  Of those seats, 70 are held by Republicans. Democrats only need win 23 of them to take control of the House.  In the Senate, the situation is reversed: there it’s the Democrats who are playing defense.  Of 100 Senate seats, 35 are up for renewal this cycle and the Democrats hold 26.  Most of these seats are in rural states — states that Donald Trump won handily in the 2016 election.  For the Democrats to gain control of the Senate they would have to hold all of their seats and win two additional ones. Finally, at the state level, the Democrats are poised to pick up Governorships, especially in key battleground states in the Midwest.  Of the 36 governorships up for grabs, Republicans are defending 26.  Important governor races in Michigan and Florida are trending Democratic; others like Ohio and Wisconsin are rated as toss-ups.

So, what’s the election about?

It is tempting to say that it’s about Donald Trump and certainly that’s what he would like us to believe. But this election is really boiling down to a simple single question: what are voters most afraid of?  Is it illegal immigrants crossing the border with Mexico or Republican threats to take away Obama’s healthcare mandate covering preexisting medical conditions? Republicans are running ads non-stop about the former; Democrats are flooding the airwaves with ads about the latter. The reasons are clear: these issues are the best ones each has to mobilize its base. As a recent Kaiser Family Foundation poll shows, Republican voters see immigration as the single biggest issue facing the country — more important than the economy and jobs.  Democratic voters see health care as the main issue, as do most independent voters.  Each of these issues taps into a palpable fear:  for Republicans, their anxiety about America’s changing identity; for Democrats, worries about economic security.  To be sure, other issues matter too — the Senate hearings on Brett Kavanaugh for Supreme Court; Trump’s trade war with China; and of course, the president himself.  But for the past couple of weeks the 2018 campaign has been about immigration and health care, 24/7.

So, who will win?

If the polls are right, the Democrats will pick up seats in the House, where they have the edge in voter enthusiasm and in fundraising in the final stretch.  That said, Republican interest in the election has picked up considerably since the Kavanaugh hearings in early October and the Republicans have closed the gap in a number of key Senate races.  Right now, most election watchers think that since the hearings Republican chances have improved in the rural areas while simultaneously, boosting Democratic chances in the suburban areas, effectively increasing Republican odds of holding the Senate and Democratic chances of picking up the House.  Such a split verdict — where both parties make gains in one of the legislative chambers — wouldn’t be unprecedented, but you have to go back to 1970 to find such a split decision.  It could happen again this year because most of the Senate seats the Democrats are defending are in heavily rural states where support for Trump runs strong while many of the House seats up for grabs have large suburban electorates. These are full of educated voters, including Republican voters, who have soured on the president and his policies. Trump has sought to nationalize this election — to make it about himself and his policies on immigration, trade, and so on — and he appears to be succeeding.  Whether he’ll be happy with the outcome remains to be seen.

There are two possible outcomes at the national level with variations in strength and breadth within each: (1) continued unified Republican rule or (2) divided government, with Democrats in control of House and possibly, the Senate. The first is the nightmare scenario for the Democrats, especially if they win the popular vote and still lose the House. This result would make Trump harder to beat in 2020, assuming he stands for reelection, and stoke the generational battle that is brewing within the Democratic caucus on Capitol Hill.  The second scenario would be judged a repudiation of Trump and force him and the Republicans to play defense for the next two years.

Scenario 2: the Democrats take the House and possibly, the Senate

If this happens, Trump will have much less room to maneuver domestically. Talk of additional tax cuts, dismantling Obamacare, and building “the Wall” will be just that — talk. Domestically, the main plays Trump will have are infrastructure, trade, and big Pharma (cutting drug prices), though much would depend on how willing he is to align his proposals with the Democrats and whether they think they are better off obstructing. Trump would likely continue trying to roll back regulations through executive order, but Democrats would now be in a position to challenge those.  Meanwhile, Trump would quickly find himself facing a drumbeat of Democratic investigations into Mueller’s findings, the Trump family’s business dealings, and the actions of his administration. 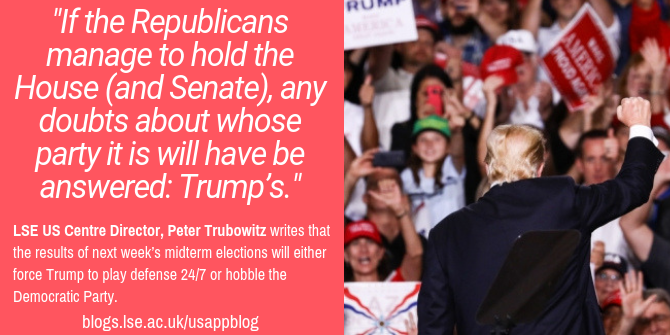 If the Democrats take both the House and the Senate, things will quickly go from bad to worse for Trump.  That will mean that there really was a “Blue Wave” and almost certainly that white college educated women turned their backs en masse on the Republican.  Trump is formidable, but a loss of this magnitude would mean that the party was losing its historic grip on highly educated, suburban voters, especially female voters.  This would be the equivalent of a body blow to the party’s long-term future and it could open up the space for challenger inside the Republican Party.

Once the implications of all this set in, I think it would lead Trump to quickly begin investing more time in the one area where he can control the agenda — foreign policy.  Not so much to buck up his legitimacy and burnish his credentials, but rather to distract the public from Democratic attacks and a possible Republican challenge.  I would look for Trump to double down on China, the Mexican border, and even possibly use military force if and where it seems low cost and low risk.

Scenario 1: What about continued Republican rule?

If the Republicans manage to hold the House (and Senate), any doubts about whose party it is will have be answered: Trump’s.  Trump would have bragging rights, outperforming presidents such as Harry Truman, Lyndon Johnson, and Ronald Reagan, all of whom saw their party take a serious hit in their first midterm election.  As Dave Leonhardt has argued, a victory of this magnitude would allow Trump to continue down the path he’s taken America — less corporate oversight, ignoring climate change, treating health care as a privilege, questioning judicial independence, and blurring the lines between truth and fiction.

Exactly how much legislation Trump could push through Congress would depend greatly on Republican margins in the House and Senate. But if the Republicans picked up a few additional seats in the Senate, I think we can expect Trump to move to dismantle what’s left of Obamacare, push to repeal the estate tax, and quite possibly fire those involved in the Russia investigation.  On the foreign policy front, I would look for him to continue focusing his attention on China’s trade practices and European defense spending, but otherwise keep his powder dry. He would have plenty of play on the domestic side and thus less incentive to invest his political capital in foreign policy.

Meanwhile, given the size of the Democratic effort this midterm (and the unprecedented amount of cash they have raked in) such a defeat will take the wind out of the party’s sails and bring a simmering generational debate about who should lead the party to a full boil. Should it be the likes of Biden, Sanders, and Pelosi or a younger generation of Dems from the California Senator Kamala Harris, to the LA mayor Eric Garcetti, to Beto O’Rourke, the El Paso Congressman trying to unseat Ted Cruz in Texas?