Last week, President Trump announced a $12 billion program of farm subsidies to assist farmers hurt by his escalating trade war with China, Canada, and other countries. Stephanie Rickard, author of a new book on government subsidies, Spending to Win, argues that this kind of financial assistance is almost always introduced to help domestic producers harmed by tariff reductions, not increases.

While researching my recent book on subsidies, Spending to Win, I came across many different types of the financial aid. Some helped producers hurt by foreign trade. Others assisted economically disadvantaged regions. None were intended to offset damages inflicted by domestic tariffs, like Trump’s proposed US $12-billion farm subsidies.

America’s farmers are on the front line in the escalating trade war. They provide an enticing target for countries looking to retaliate against Trump’s tariffs. Nearly 20 percent of US agriculture products are exported and many farmers support Trump. The agriculture sector also has a disproportionate influence in US politics. Many countries have consequently targeted American agricultural products with tariffs in retaliation for Trump’s tariffs on steel, solar panels, washing machines, and other foreign-made goods.

These retaliatory tariffs imposed by China and others have hurt American farmers and Trump’s proposed $12-billion aid program is an attempt to compensate them for the losses they’ve incurred. Ultimately, Trump seeks to ensure farmers’ (continued) support for Republicans in November’s midterm elections and for himself in the 2020 presidential election.

Using subsidies to win over key constituencies is not original. Governments around the world engage in politically-motivated subsidy spending, as I show in my book. Subsidies often involve large amounts of government money. Subsidies for the EU manufacturing sector account for approximately €1,000 per person employed in the sector. In the US, Fortune 500 corporations receive more than $63 billion worth of subsidies. 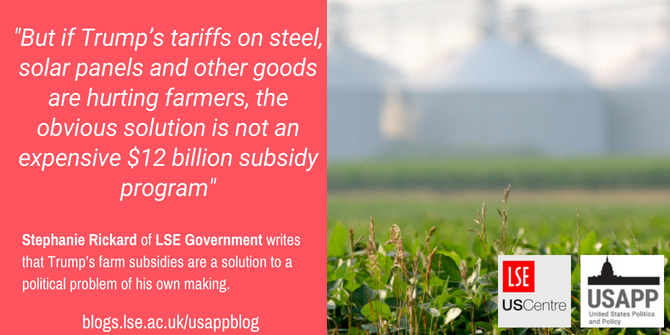 “Central Illinois soybeans” by Kevin Dooley is licensed under CC BY 2.0

Subsides can be used by governments to offset tariff cuts. In Japan, for example, the government planned to increase subsidies to pig farmers in order to compensate them for a reduction in pork tariffs established as part of the Trans-Pacific Partnership (TPP) multilateral trade agreement. Prior to TPP, a tariff of up to ¥482 yen was imposed on one kilogram of cut pig meat, such as pork tenderloin or pork loin. The tariff was to be gradually reduced to ¥50 yen over 15 years as part of the TPP agreement. Pork farmers stood to lose from the tariff reductions because more foreign pork would enter the country and do so at a lower cost. To offset the effects of this tariff cut on farmers’ incomes, the Japanese government promised to increased subsidies for pork farmers.

In this way, subsidies can counterbalance tariff cuts. Given this, it is no surprise that tariff cuts correlate with increased government spending on subsidies, as I show in a study of more than 40 countries over nearly two decades. I find that, on average, a one-percentage point upsurge in foreign imports correlates with a 0.2 percentage points increase in subsidy spending as a share of total government expenditures. Governments spend more on subsidies following a reduction in tariffs to assist producers.

But Trump’s proposed farm subsidies follow a different logic. Instead of helping groups hurt by tariff cuts, Trump’s subsidies instead aim to help producers harmed by tariff increases. Tariffs imposed on US agricultural products by China and others reduce farmers’ incomes. Soybean prices alone have fallen nearly 20 percent since April when China first announced the 25 percent tariff on US soybeans. Trump’s $12-billion aid program is an attempt to compensate farmers for income lost from foreign tariffs imposed on US goods in response to Trump’s own tariffs.

But if Trump’s tariffs on steel, solar panels and other goods are hurting farmers, the obvious solution is not an expensive $12 billion subsidy program. Instead, removing the offending tariffs and deescalating the mounting trade war would be a far better solution.