It’s election season in the US, which also means that fears about voter fraud are back in the news and on the lips of many politicians. In new research which examines the role of local media in stoking concerns about voter fraud, Brian J. Fogarty, David C. Kimball, and Adriano Udani find that in states where the media frequently mention voter fraud, the public become more concerned about it. This effect is heightened for Republican voters and even more so for those who live in states under Democratic legislative control.

As Election Day in the US approaches, the issue of voter fraud and electoral integrity has once again been gaining attention in the American press and in politicians’ and candidates’ speechmaking.  While voter fraud has not enjoyed the same high profile attention that Donald Trump provided for the issue during the 2016 presidential election, questions over the validity of voter rolls and subsequent purges, and new restrictive voting measures (e.g., photo identification) have again featured in the run up to the midterm elections.  For example, the US Supreme Court has declined to rule on a new voter identification provision in North Dakota that will effectively disenfranchise Native Americans in the state; a provision that exists even though North Dakota has only prosecuted one case of voter fraud over the past few decades).  In Georgia, state officials have been purging voter rolls based on whether citizens voted in previous elections.

While research has unequivocally demonstrated that there is essentially no voter fraud in US elections, the perception amongst Americans that it does exist is a threat to electoral integrity is real.  For example, a 2016 Washington Post poll found that 46 percent of Americans believe voter fraud occurred frequently in elections.  Hence, the rhetoric surrounding voter fraud may serve as a greater threat to US electoral integrity than the actual prevalence of fraud.  A key component of this rhetoric is the role of the media.

In recent research, we show the role that the local media can have on partisan perceptions of voter fraud in the US.  Combing survey data from the 2012 Survey of Performance of American elections with state-level newspaper cover of voter fraud leading up to the 2012 presidential election, we find that in states where media coverage frequently mentioned voter fraud, the public’s concerns regarding fraud was heightened.  Yet, this effect differed across partisan identification and political interest.  In particular, press attention to voter fraud had a larger effect on Republicans than for Democrats or Independents.  The level of political interest had a further conditioning effect on Republicans, where those who were politically interested perceived voter fraud was more frequent and a larger problem than Republicans who were not politically interested.  This suggests that politically interested Republicans are more susceptible to voter fraud rhetoric than other citizens. 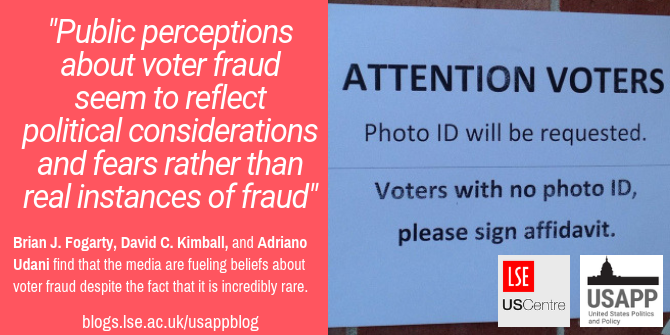 By MarkBuckawicki [CC0], from Wikimedia Commons

Efforts to stoke fears of voter fraud continue in the United States.  Prominent Republicans continue to make the explicit argument that undocumented and non-citizens will illegally vote.  For example, in Georgia, Republican gubernatorial candidate Brian Kemp has defended the removal of people from voting rolls and claims of voter suppression by arguing that the Democratic candidate, Stacey Abrams, is encouraging undocumented individuals to vote.

While the reality of the prevalence of voter fraud is unlikely to be different for the 2018 US midterm elections, the perception of how common it is shows no signs of abating.  By keeping voter fraud on the election agenda, Republicans are able to identify a problem – undocumented and non-citizen voters – and offer a solution – restrictive voting laws – that serves to stimulate their base and potentially reduce turnout for Democrats.

David C. Kimball – University of Missouri – St. Louis
David C. Kimball is a Professor of Political Science at the University of Missouri-St. Louis. He is the co-author of Helping America Vote (Routledge 2012), Lobbying and Policy Change (University of Chicago Press 2009), and Why Americans Split Their Tickets (University of Michigan Press 2002), and the co-editor of Controversies in Voting Behavior, 5th ed. (CQ Press 2011). He has written several articles on voting behavior, election administration, public opinion, and interest group lobbying in the United States.

Adriano Udani – University of Missouri – St. Louis
Adriano Udani is an Assistant Professor of Political Science with a joint appointment in the Public Policy Administration Program at the University of Missouri – St. Louis. He studies the social and political consequences of immigration law enforcement for migrant groups and Anglo Americans in the United States. He has written articles on voter fraud perceptions, voter identification laws, knowledge of state immigrant laws, and Latinx experiences with U.S. immigration law enforcement.