Conspiracy thinking is only dangerous when it mixes with extreme partisanship

Conspiracy thinking is only dangerous when it mixes with extreme partisanship

Conspiracy theories about American politics are nothing new, but recent months have seen an upswing in their impact, after pipe bombs were mailed by a conspiracy theorist to high-profile figures with links to the Democratic Party. Adam M. Enders and Steven M. Smallpage write that conspiracy thinking is not dangerous in and of itself: most Americans have a tendency to be suspicious. But problems arise, they argue, when this conspiratorial thinking is activated by extreme political partisanship and polarization. People then begin to buy into conspiracy theories aimed at the opposing party, which can in turn lead them to take often violent actions.

There’s no shortage of conspiracy theories in American politics. In the past few weeks, we’ve heard that protestors at Brett Kavanaugh’s confirmation hearing were staged by progressive Jewish billionaire George Soros, and that the Trump administration is communicating with their base via a secret code being deciphered by anonymous master code-breaker, “Q.”

Most recently, Cesar Sayoc –who believed in conspiracies about George Soros, Barack Obama, and the Clintons, as well as “chem trails,” giant alligators, and crisis actors – mailed pipe bombs to 13 high-profile political figures associated with the Democratic Party. But, conspiracy theories would even emerge about Cesar Sayoc himself: prominent Republican commentators have endorsed the idea that Democrats sent the bombs to themselves as part of a “false flag” operation to erode public opinion of Republicans before important midterm elections.

Typically, “conspiracy theories” are defined as explanations of events that reference as the main causal mechanism the (semi-)secret plans of a small elite to nefariously usurp power for their personal benefit. Conspiracy thinking is a kind of ideology that is not accidental to American culture. Americans are a suspicious lot. This suspiciousness often lies dormant for most people, most of the time. Often partisans are able to funnel their suspicions toward the other team, which mutes many of the potentially destructive behaviors of conspiracy thinking. So, perhaps we have a simple answer to the most pressing question, “is conspiracy thinking inherently dangerous?” No, probably not. Except when mixed with partisanship.

In our chapter about conspiracy theories and conspiracy beliefs in American politics, we discuss research showing that conspiracy thinking is uncorrelated with partisanship and ideology: those on the left and right are equally predisposed to agree with conspiratorial sentiments like, “Big events like wars, the current recession, and the outcomes of elections are controlled by small groups of people who are working in secret against the rest of us” or “Much of our lives are being controlled by plots hatched in secret places.” 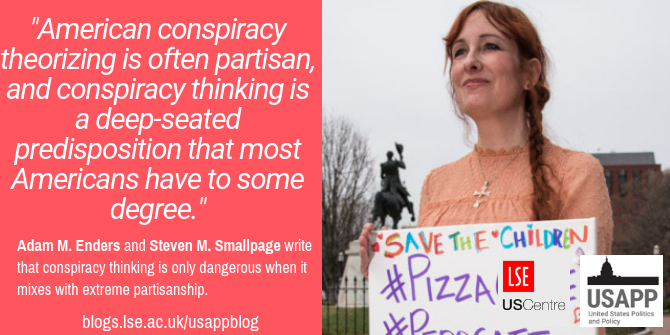 ““Pizzagate” conspiracy protest” by Blink O’fanaye is licensed under CC BY NC 2.0

Even though Democrats and Republicans are equally predisposed to interpreting events in a conspiratorial fashion here and there, drawing the line between a “conspiracy theory” and a partisan belief has become increasingly difficult. Partisan polarization, in particular, blurs the line between conspiracy theory and prime-time television talking points. As the goal of politics increasingly shifts to merely beating one’s opponent, the veracity of the information used to accomplish this goal matters less and less. Instead, conspiracy theories are used – both by political elites and rank-and-file partisans – to express disdain for the out-party and serve as a unifying force for the purpose of political mobilization. Hence, conspiracy theories are frequently partisan.

We’ve seen plenty of elite conspiratorial messaging recently. Donald Trump famously supported several conspiracy theories about Barack Obama, including that he wasn’t born in the US, that he lied about attending Columbia University, and that he had the administrator who eventually released his (presumably faked!) birth certificate murdered. More recently, US Senators endorsed the conspiracy theory that George Soros paid people to protest the second round of Kavanaugh hearings. In October, Rush Limbaugh, Ann Coulter, and Michael savage propagated the idea that Democrats mailed pipe bombs to themselves in order to drum up midterm election support. Conspiracy theories have become regular fodder for soft news shows like Sean Hannity’s and Tucker Carlson’s.

In some of our most recent research, we found that Republicans are more susceptible to conspiratorial cues from official sources than Democrats, even when it comes to conspiracy theories that are not politically expedient for Republicans to put stock in. Why? Republican elites appear to be asymmetrically mobilizing conspiracy theories for political purposes. One needs to look back no further than the post-midterm election landscape currently gripping American politics for an example: Donald Trump has explicitly called for halting the midterm recounts in crucial states like Florida and Georgia because of unsubstantiated voter fraud allegations—a “conspiracy” by the state election officials to swing the election for the Democrats. Merely referencing conspiracy theories serves to legitimize the ideas, cue distrust of official information, and activate suspicion toward authority figures.

Even though liberals and conservatives, Democrats and Republicans are predisposed to view the world in similar terms when it comes to conspiracy theories, their beliefs and belief systems can be systematically altered and activated by elite communications. Parties, presidents, members of Congress, campaign managers, party organizers, and media personalities set the parameters for political discourse. The more polarized these influential partisan figures and groups become, and the more frequently they invoke conspiracy theories against their political opponents, the more Cesar Sayoc’s the US will see.