In Nihilism and Technology, Nolen Gertz aims to circumvent the binary discussions that characterise contemporary popular discourses surrounding technology, instead exploring the philosophy of nihilism in order to reflect upon the relationship between our values and the ways we use and design technologies. This is a lively and convincing read, finds Jon Greenaway, that will leave readers far better equipped to understand and resist the numbing techno-nihilism of contemporary late capitalism.

In this short but hugely engaging book, Nolen Gertz, assistant professor of Applied Philosophy at the University of Twente, manages to both provide a compelling and rich introduction to Friedrich Nietzsche and nihilism as well as avoid the all-too-common reductionism of popular discourse around technology. Rather than boil down the question of technology to the simple binary choice of ‘is this thing good or bad?’, Nihilism and Technology presents a far more intriguing and challenging set of questions.

There is, as the book notes from the preface, a fine and venerable tradition of philosophical technophobia (with Martin Heidegger, Herbert Marcuse and Jacques Ellul being perhaps the most well-known proponents), but Gertz’s position at the beginning of the book is more akin to a weary acknowledgement of hypocrisy – able to teach these thinkers, but still using technology to inform students about the dangers of technology. We are, whether we like it or not, bound up with technology and so, even if we were to decide that technology is bad and exploitative, it is so ingrained within our day-to-day existence that we could hardly remove it wholesale. For Gertz, the threat is not simply exploitation, but rather the same danger foreseen by Nietzsche: nihilism. Rather than re-fighting the techno-optimist versus techno-pessimist battle, the book aims to ‘move us instead towards interrogating […] how technologies both shape and are the result of […] ideological definitions’ (7).

Beginning with a strong and accessible introduction to the tradition of philosophical nihilism, drawing from Jean-Paul Sartre and, most crucially, Nietzsche, Gertz distinguishes between active and passive nihilism: between the bold questioning of the value of our values and the passive, unthinking acceptance of what we believe to be right and true. Passive nihilism is that which ‘numbs’ us, in Nietzsche’s words, from truly facing our existence. After introducing nihilism, we then come to technology, specifically the rise of transhumanism. This movement of thought supposes the flaws and limitations of human existence as not essential but as historically contingent. We can, for the transhumanists, fix the flaws of our human nature and through technology transcend our limitations. What the transhumanists are proposing is essentially replacing the previous God (now dead) with the bold, yet-to-appear perfected techno-human. Despite the appearance of radicalism, the transhumanists are still grappling with the same passive nihilism that Nietzsche saw in Christianity – ‘Traditional Moral Values 2.0’ (31).

In the following chapter, Gertz outlines a philosophy of technology, drawing on the post-phenomenology of philosophers like Don Ihde, where the principal concern is not the status of technology, but rather the relations between technologies and humans. Synthesising this with his Nietzschean interest, Gertz proposes a model which he terms ‘nihilism relations’, wherein we relate to technologies as if we could not do otherwise. We willingly put up with the boredom, the frustration and the petty limitations imposed upon us as the price simply worth paying to be informed, entertained and connected, but holding out hope that maybe, maybe, next year the newer model will be better, will be faster, will be the thing that finally makes this human-tech relationship worth something. As a result, we become numbed to our existence, willing to hand over responsibility to the machines which increasingly govern us at home and at work. As Gertz puts it, we say things like ‘I can’t believe I spent all day on the computer’, rather than ‘I can’t believe I am not taking responsibility for having spent all day on my computer’ (55).

After this opening section, which is more philosophically focused, the final two thirds of the book are case studies of various technologies and the ways in which this nihilism relation plays out in everyday life. From the evilly addictive platform, Tinder, which encourages a nihilistic separation of who we are from what we are doing, to the herd networking of Facebook, the platform that you can hate but never leave, the case studies are fascinating and often very fun insights into the ways in which we not only use technology but increasingly allow technology to use us. In one of the final chapters, ‘The Trolling of the Idols’ (all the chapters show a keen appreciation for Nietzsche-based puns or play on words), Gertz offers an analysis of the ‘orgies of feeling’ which dominate social media, from mass shamings and online mobs to trolling and doxing. Technology, in Gertz’s model, seeks to mediate the suffering of our existence yet traps us in a vicious feedback loop, which, in another Nietzschean phrase, serves only to make the sick sicker, as ‘the technology used for distracting us from our sufferings become technologies used for inflicting suffering on the world’ (192).

The danger of a passive nihilistic attitude towards technology is the danger of freedom without responsibility, and in many ways the book is an extended examination of what being a responsible and free individual means when so much of human-technology relations are predicated upon the notion of abdicating or outsourcing our own responsibility. The final chapter features Gertz’s call for the ‘death of Google’, just like Nietzsche’s earlier call for the Death of God. The danger is that, just as God’s death caused us not to seek out new ways of understanding and making value in the world but to seek new Gods, the same could occur again. If Google is dead, would we not just seek new Googles, new technological means of imposing order and of avoiding the hard, necessary engagement with who we are, with what we believe and how we might live?

The book is a lively and convincing read, which thanks to its wide appeal and accessible and often dryly funny prose, deserves to find a wide audience far outside the often narrow confines of academic philosophical discourse. In the ever-increasing reach of technology and the ways in which we have systematically reshaped our lives around it, Gertz sees the costs and dangers in a clear way. But this is not simply a book of doom – rather, a bold and philosophical examination of possibility. The book makes philosophy not just widely accessible, but urgently necessary. It invites the reader to examine themselves honestly, and one closes the book with a sense of genuine insight into the current social reality and far better equipped to be aware of and resist the pacifying, numbing techno-nihilism of contemporary late capitalism. 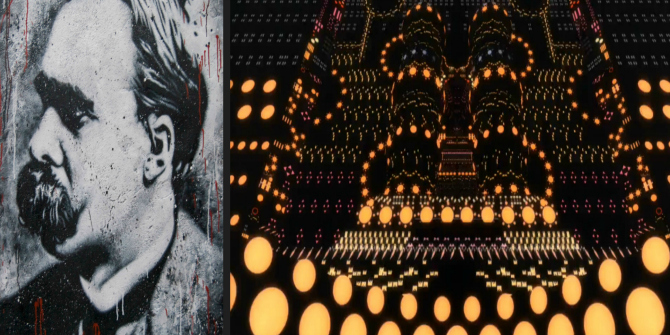