How President Trump helped the media lose the 2018 midterm elections

How President Trump helped the media lose the 2018 midterm elections

Historically, leading up to Election Day, media coverage tends to follow the polls: when one party is doing better with voters, the media’s tone tends to be more favorable towards them. But in a new analysis of news coverage of midterm elections since 2002, Stuart Soroka finds that the 2018 midterms were a different story. If the midterms had followed previous trends, he argues, then the media’s negative tone towards the Democrats would have pointed to as much as a four percent drop in the party’s vote share. He writes that this coverage, even in the face of the party’s much-anticipated midterm victories, may be a consequence of media attentiveness to President Trump’s negative rhetoric about his opposition.

The tone of media coverage often reflects the outcome of election campaigns. This is not necessarily because opinion follows media content — it seems just as likely that media reflects the state of public affairs. Either way, there is a considerable body of work that finds a correlation between media coverage and voter preferences, both in the US and elsewhere (e.g., Balmas & Shaffer 2010; Druckman & Parkin 2005; Fournier et al. 2004;  Hopmann et al. 2010; Ladd & Lens 2009). More often than not, when voters’ preferences swing towards one party over the other, so too does the tone of media content. This was decidedly not the case in the most recent midterm election. Indeed, preliminary analysis suggests that, as far as the tone of media coverage is concerned, this election was unlike any other in the past 20 years.

This claim is based on my recent analyses of all election-related newspaper articles, from September 1st to October 31st, in every midterm election since 2002. The database includes all content from 17 major American newspapers. From roughly 90,000 new stories, I extract every sentence that mentions Republicans or Democrats — between 35 and 70,000 sentences per election. I then code the tone of every sentence using automated content analytic techniques (see Young & Soroka 2012; quanteda).

The end result is a measure of net tone for every day of each election, capturing the difference between the tone of sentences that mention Democrats and the tone of sentences that mention Republicans. This procedure has been successful in the past. My past work with co-authors (e.g., Soroka et al. 2009; Wlezien and Soroka 2018), for instance, suggests a strong correspondence between trends in vote share and trends in media coverage.

Indeed, in some ways the process works relatively well for the 2018 campaign. If we focus on day-to-day differences during the campaign, media coverage moves alongside vote preferences. For instance: The Democratic advantage in the increased in early September, decreased until early October, and then increased again through mid-October. The same trends are evident in the tone of media coverage.

If we focus on differences in tone across newspapers in 2018, we also see predictable differences. Figure 1 shows averaged ‘net tone’ for each newspaper. The Boston Globe was on average the most positive about Democrats; the Arizona Republic was the least. This is roughly as we should expect given the editorial stance of newspapers, as well as regional vote preferences. 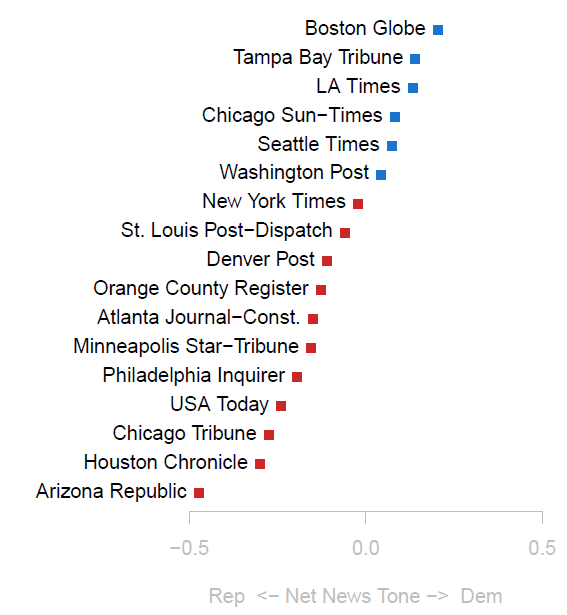 There are already hints in Figure 1 of some peculiarities, however. Given criticism from the Trump administration, it is notable that both the New York Times and Washington Post are decidedly centrist — that is, not pro-Democratic — in the tone of their coverage. But it is also surprising, given that Democrats increased their vote share in 2018, that coverage in a majority of newspapers leans in a pro-Republican direction. 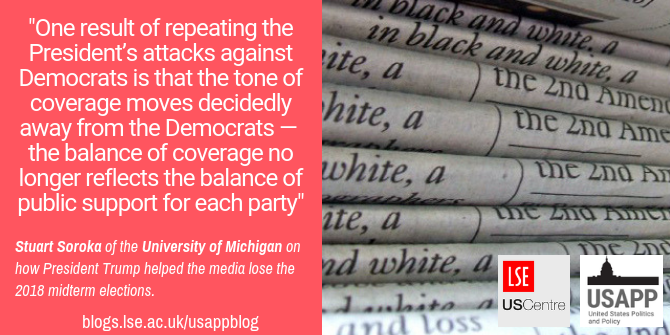 “A stack of newspapers” by Daniel R. Blume is licensed under CC BY SA 2.0.

To be clear, looking at ‘net tone’ newspaper by newspaper, the advantage in media coverage was for the Republicans, not the Democrats. To make clear just how peculiar this is, let us consider ‘net tone’, averaged across all newspapers in September and October, in the past five midterm elections. Figure 2 plots the congressional vote swing and each election against the average tone of news content. 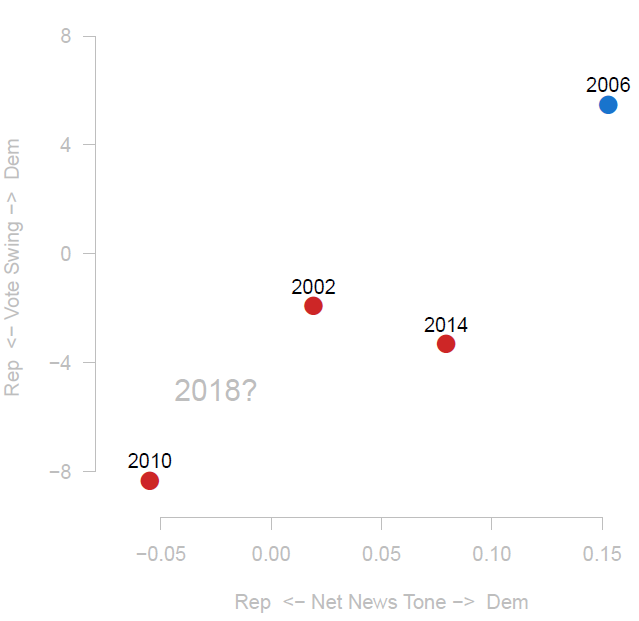 In the four elections before 2018, there is a strong positive relationship between the tone of coverage and the election outcome. But 2018 is an outlier. Figure 2 shows, based on the tone of coverage, what we might have expected in 2018. News coverage in 2018 appears to have favored the Republicans; and given results from the preceding four elections, the tone of news coverage was in line with a roughly 3- to 4-point decrease in the Democratic vote share.

What accounts for these anomalous results?  In my view, these results signal some kind of critical shift in the way in which media content reflects campaign-period political affairs. The nature of that shift is still up for debate.  But I see these results as (yet another) motivation for re-considering how news media cover the current political environment.

One preliminary hypothesis, based mostly on supposition rather than evidence, is that the Trump administration is particularly successful at getting its message out. The current administration’s claims are systematically repeated by news media, because those claims are newsworthy. But the nature of these claims is rather different than what we are used to from a president.  And one result of repeating the President’s attacks against Democrats is that the tone of coverage moves decidedly away from the Democrats — and moreover, the balance of coverage no longer reflects the balance of public support for each party.

Note that this fact does not preclude the possibility that trends in media coverage over a campaign still reflect trends in voter preferences. They mostly do. In this regard, it is still the case that media coverage reflects the balance of party support over an election campaign.  The overall balance of positive and negative coverage of parties is nevertheless, relative to vote share, markedly more Republican-leaning than in the recent past.  If this is in fact a consequence of coverage of the Trump administration, then a reconsideration of how and when to cover partisan attacks may be in order.

Stuart Soroka – University of Michigan
Stuart Soroka is the Michael W. Traugott Collegiate Professor of Communication Studies and Political Science, and Faculty Associate in the Center for Political Studies at the Institute for Social Research, University of Michigan. His research focuses on political communication, the sources and/or structure of public preferences for policy, and on the relationships between public policy, public opinion, and mass media.