While the US Congress and state legislatures are charged with representing their constituents, the characteristics of those who are elected often do not reflect those of their voters. In new research Eric R. Hansen explores whether these differences affect which interests they represent. Studying bills regulating the insurance industry from across the states, they find that bills put forward by lawmakers who had been insurance professionals tended to be more pro-industry compared to bills introduced by colleagues who did not share the same background.

The recently seated 116th Congress has the most diverse membership in history in terms of gender and race and ethnicity. However, Congress remains dominated by college-educated professionals. Lawyers, businesspeople, and skilled professionals, particularly those elected previously to state-level offices, hold the lion’s share of seats on Capitol Hill.

The relative lack of diversity of lawmakers’ life experiences has led to concerns that government policies might reflect a professional or class bias. Research in political science has tended to reinforce those concerns. For example, lawmakers with business backgrounds tend to have pro-business voting records. Lawmakers who held blue-collar jobs as adults are more likely to support economically liberal measures than their white-collar colleagues.

However, existing research tends to focus on how lawmakers vote on bills put before them by party leaders. Voting is important, but it’s only a small part of the lawmaking process. Before a bill ever makes it to a vote, a legislator has to introduce it. Important decisions over what issues should be considered—and what issues are not worth considering—are made at the introduction stage.

Do lawmakers’ professional backgrounds affect their decisions about which issues to consider and which issues to ignore? On one hand, lawmakers could bring a professional knowledge or worldview to bear in addressing broader social problems. Experience in a field can highlight existing problems related to that field that legislation might solve. Lawmakers might even write legislation that favors their own industry or profession. On the other hand, lawmakers could write bills that have nothing to do with their professional backgrounds. They might instead pander to audiences that help them win reelection, writing bills demanded by their constituents, lobbyists, donors, or activists in their own parties.

Research I conducted with Nicholas Carnes and Virginia Gray provides some new evidence on this question. We studied bills regulating the insurance industry in the 50 states. (Despite the attention Congress received when it passed the Affordable Care Act in 2010, almost all legislation regarding insurance markets is written at the state level in the US) Insurance is a large and important industry, but policymaking on insurance often fails to make headlines (especially at the state level). The technical nature of insurance regulation, as well as the dearth of public attention, makes insurance an area of policymaking that lawmakers with relevant professional experience might come to dominate. Using data from Open States, we gathered all bills related to insurance written in 2011-12 in the 30 states where we also had data about the occupational backgrounds of legislators. 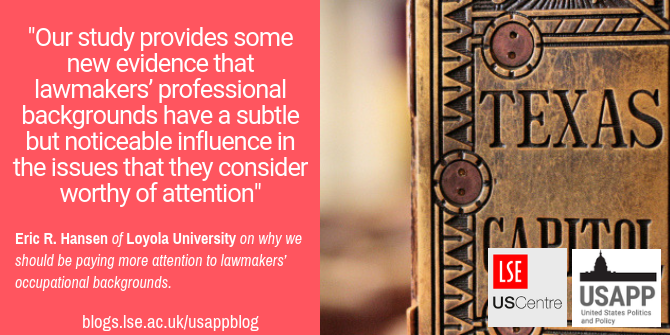 “Texas Capitol” by Phil Roeder is licensed under CC BY 2.0

Figure 1 – Favorability of Bills to Insurance Industry by Legislator Background 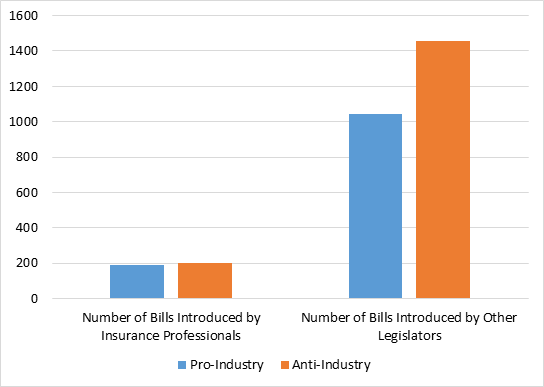 However, we can compare across state legislatures to observe how much effort each legislature put into considering new insurance laws. We assumed that a greater number of relevant bills and amendments sponsored (relative to the total number of bills introduced) means a state legislature put more effort into insurance regulation. We also assumed that insurance companies prefer to maintain the status quo and want no new regulation from states. If insurance professionals wanted to help out their former industry, we might expect states with more insurance professionals to spend less time considering new insurance bills.

We tested this possibility by comparing the same 30 states’ effort on insurance between 2007 and 2012, this time gathering data on all relevant bills and amendments from Lexis Nexis. Though our estimates varied, our simplest model showed that the state legislatures with the most insurance professionals on average considered about 270 fewer insurance bills and amendments each term than the state legislatures with no insurance professionals.

However, the differences in the activities between insurance professionals and their colleagues with other backgrounds were small. Our study should not be taken to mean that occupation determines legislators’ priorities in office. Rather, our study provides some new evidence that lawmakers’ professional backgrounds have a subtle but noticeable influence in the issues that they consider worthy of attention.