On Election Night 2018, Democrats and Republicans had reason to be both pleased and dissatisfied with the results of the US Senate elections. While Republican’s hopes of increasing their majority did not materialize, the party did manage to pick up several Democratic seats. Similarly, Democrats were no doubt disappointed about loses by some of their top challengers and vulnerable incumbents. Several Democratic incumbents did, however, perform well in key swing states—Michigan, Ohio, and Pennsylvania—that had been crucial for President Trump’s victory only two years earlier. In short, it was an election in which neither party made significant inroads, but also neither party was without some hope for the future.

In contrast, the outcome of the 2018 gubernatorial elections was, on average, far more encouraging for the Democrats. Prior to this election, around one-third of governorships were held by a Democrat. After strong performances from Democratic incumbents and challengers, the party now controls 23 of the 50 governor’s mansions. There were, however, at least a few positive results for the Republicans. Three popular Republican incumbents—Charlie Baker, Larry Hogan, and Phil Scott—held onto their seats in Democratic strongholds of Massachusetts, Maryland, and Vermont respectively. These victories were cancelled out, however, by both expected (e.g. Illinois) and more surprising (e.g. Kansas) Democratic gains. 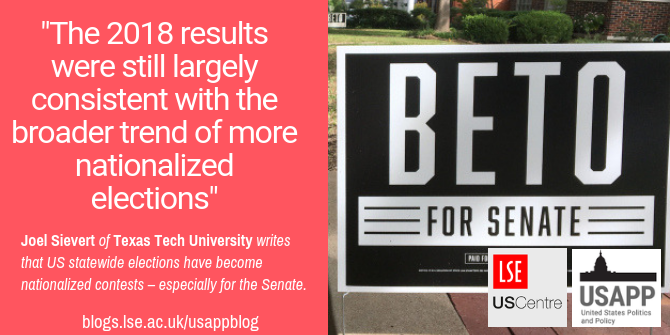 “Blue Texas” by Dan Brekke is licensed under CC BY NC 2.0

Despite the differences in partisan fortunes across senatorial and gubernatorial elections, the 2018 results were still largely consistent with the broader trend of more nationalized elections. As Dan Hopkins’ recent book outlines, elections can become more highly nationalized in several different ways. With respect to election outcomes, however, nationalization can be thought of in terms of an increased association between the outcomes of presidential and down ballot elections. The increased correspondence between presidential and statewide elections suggests that top-down forces, on average, have a greater impact on election outcomes than do candidate-specific factors or local conditions. In more nationalized elections, it is top-down forces, which may include presidential vote choice or partisan identification, that drive vote choice rather than factors like incumbency or candidate ideology.

Figure 1 – Presidential and Statewide Elections Won by the Same Party 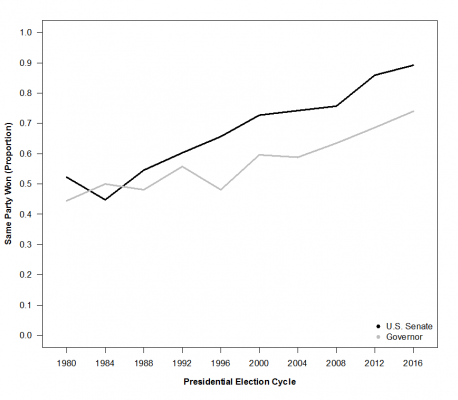 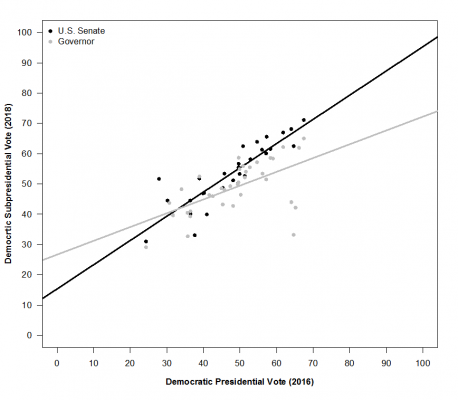 The high levels of nationalization in Senate elections shown in both Figures 1 and 2 is of particular note when looking ahead to the 2020 elections. Republicans will have to defend 22 Senate seats compared to the Democrats 12 seats. More importantly, the 2020 US Senate contests include Republican seats in some Democratic leaning states, such as Colorado and Maine, and states that have historically been competitive, like Iowa and North Carolina. While it is far too early to know if control of the Senate is likely to flip, the mix of a greater correspondence between presidential and senatorial elections and a relatively unfriendly US Senate map suggests that Republicans will have an uphill battle to retain their majority. Regardless of which party wins majority control of the Senate, it is reasonable to expect that they, like other recent Senate majority parties, will have to govern with a narrow majority.