In almost all US states, voters are required to register to vote ahead of actually casting their ballot. In new research focusing on voter registration in Florida, Thessalia Merivaki finds that both how and where people register to vote is important. Those who registered to vote in rural counties, she writes, as well as in the June and February preceding the registration deadline, were more likely to have their registrations rejected.

Not all Americans who attempt to register to vote will be able to cast a valid vote on Election Day because their registration application will have been deemed to be invalid. Many things can go wrong in the process of voter registration that can result in a rejected application. A voter may fill the form in haste when offered to register to vote outside a shopping mall by an advocacy group, which is responsible of submitting it on behalf of the voter. Or they may mistype their address on the form, and the local election official is not able to correct it in time.

Because voter registration is complex and often considered a barrier to political participation, Congress adopted the National Voter Registration Act in 1993 and increased the options for prospective voters to register to vote. Except from five states who allow for voters to register to vote on Election Day, citizens in forty-four states and the District of Columbia are offered voter registration when they apply for a driver’s license, welfare benefits, when they check out a book at a public library, or when they are approached by advocacy groups. They also can mail their voter registration application to their local election office, or submit it in-person.

How and when one registers to vote matters 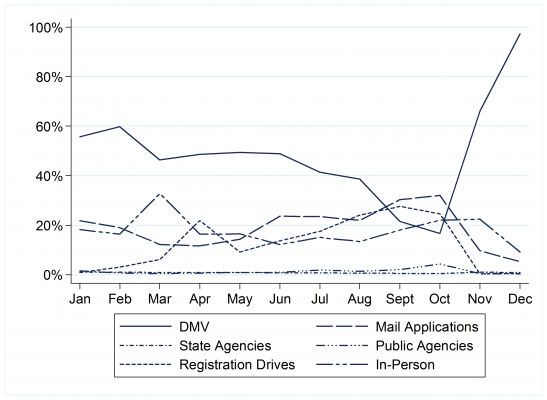 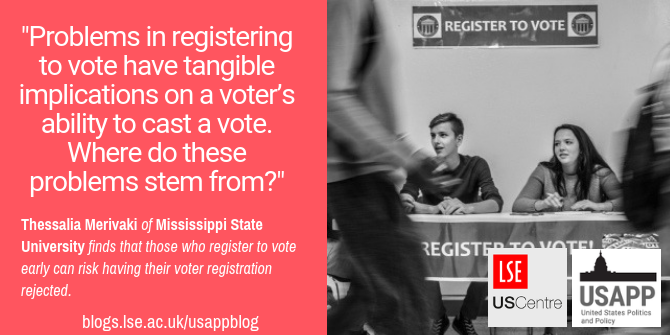 “National Voter Registration Day” by Phil Roeder is licensed under CC BY 2.0

It is plausible that more voter registration applications are rejected in densely populated jurisdictions due to the high number of prospective voters interested in registering to vote. As Figure 2 shows, however, some rural counties in Florida rejected more registrations on average between January and December of 2012. This suggests that how and when one attempts to register to vote may impact the chances that a voter registration application will be successfully processed.

Figure 2 – Percentage of Rejected Voter Registrations in Florida in 2012 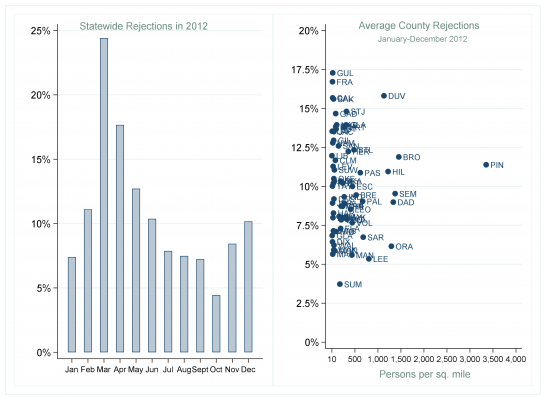 Are some methods of voter registration more prone to rejection? Or are there seasonal effects depending on when a prospective voter registers to vote? Do counties and regions systematically differ in how they process voter registration applications regardless of when and where they were submitted? At least insofar as the 2012 election year is concerned, it appears so. Applications submitted by mail and through state agencies, such as disability offices and public assistance offices, reduce the overall rejection rates in a local jurisdiction, when controlling for timing of voter registration, local jurisdiction density, and partisanship of the local election officials.

Modernizing voter registration and the impact on rejections

Problems in registering to vote have tangible implications on a voter’s ability to cast a vote. Where do these problems stem from, however? Do voters submit incomplete applications too late in the election cycle, which cannot be processed? Are voters more likely to make errors when registering to vote depending on how the choose to register? Are local election officials able to use their discretion when processing registrations? These are important questions that require different solutions insofar as minimizing errors in voter registration.

Thessalia Merivaki – Mississippi State University
Thessalia Merivaki is an assistant professor of political science at Mississippi State University. Her research focuses on the systematic study of election administration and reforms and the impact on voters, which is part of the growing field of Election Sciences. Her forthcoming book, “The Administration of Voter Registration: Patterns and Variation Across the States,” addresses the structural and administrative challenges in voter registration and how they condition voters’ access on Election Day.