In the 2016 election, Donald Trump appealed to many white voters’ concerns about crime through dog whistle rhetoric. Did Trump’s use of this racist rhetoric mean that many of those who did vote for him were unwilling to admit their support in the lead up to the election? In new research, Kevin H. Wozniak, Brian R. Calfano, and Kevin M. Drakulich primed survey respondents with different images relating to policing. They find that that whites exposed to such images were more likely to state their preferred candidate, with more Independent whites revealing a preference for Trump when shown stop and frisk imagery. These results indicate, they write, that media framing of policing in the lead up to the 2016 election may have influenced voters, even if they were unwilling to share these preferences with pollsters.

Racial tensions surged back onto the American political agenda during the 2016 election.  Following numerous mass protests and sporadic riots sparked by the deaths of people of color at the hands of police officers, Hillary Clinton and Donald Trump took opposite positions on the “law and order” issue.  Clinton expressed empathy with communities of color, condemned systemic racism, and called for criminal justice reform.  Trump portrayed crime as an out-of-control problem, expressed solidarity with police, and condemned Black Lives Matter protesters.  Critics argued that Trump’s disparagement of black protesters was merely one facet of his broader use of dog whistle rhetoric designed to appeal to white voters who harbored racial resentment.  However, in new research, we find that publicly “naming” dog whistle rhetoric can restore Civil Rights norms and make people less willing to be “lumped together” with a candidate who has been called out for racist tactics—making people “shy” about claiming to support said candidate.

Since the 1960s, presidential candidates have endorsed “tough on crime” agendas in order to appeal to Americans’ fears of crime, lawlessness, and disorder.  Tough on crime policies disproportionately penalize people of color, but post-Civil Rights era norms create a stigma against expressing blatantly racist sentiments or endorsing blatantly discriminatory policies.  In order to circumvent these norms, politicians employ “dog whistle” rhetoric that evokes race without actually mentioning race out loud.

This alignment of factors led to the “shy Trump voters” hypothesis. Trump’s victory caught elites by surprise. Most pre-election polls showed Clinton maintaining a narrow lead, and pollsters scrambled to explain their failure after the election.  One possible explanation was that some Trump supporters were unwilling to admit their support for him out loud because he had been accused of peddling in racist tropes about crime and disorder.  This hypothesis suggests that polls systematically under-estimated the breadth of Trump’s public support.

Empirical support for the “shy Trump supporters” hypothesis is inconsistent.  We contributed to this debate by including the option “prefer not to answer” in our candidate choice question on a 2016 national survey, allowing respondents to mask their preferences.  About 15 percent of respondents chose this option, triple the number who indicated that they preferred not to answer any other question on our national survey.  This finding is consistent with the hypothesis that some voters did not feel comfortable disclosing their candidate preference, but what caused this masking? 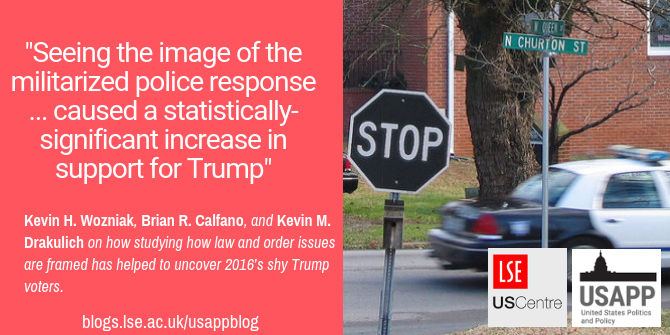 “cop vs cop” by Andrew Herington is licensed under CC BY NC SA 2.0

Theories of “law and order” politics and “dog whistle” rhetoric suggest that voters who put credence in racialized stereotypes that people of color are less respectful of the rule of law than whites would have been particularly critical about the Black Lives Matter movement and particularly receptive to Trump’s condemnation of it.  As such, we hypothesized that reminding people about the mass protests and racial conflict that preceded the electoral campaign would generate sufficiently-strong emotions in resentful voters that it could overcome the stigma against expressing political positions that might be considered racist.

To test this hypothesis, we conducted an online, randomized framing experiment among a sample of 1,100 respondents from Qualtrics’ national, online panel in late April 2016.  We restricted the analysis to non-Hispanic whites, non-Hispanic blacks, and Hispanic respondents who identified as Democrat, Republican, or Independent.  The survey banner contained the treatment: pictures of police officers interacting with civilians that we chose to represent a spectrum of hostile to benign interactions.

Respondents were randomly-assigned to receive an image of 1) two police officers in riot gear atop an armored vehicle pointing a rifle at protesters in the street with their hands raised (representing “militarized” policing), 2) two smiling police officers, one of whom was giving a “high five” to a civilian seated on his porch (representing “community policing”), or 3) two police officers patting down two civilians who had their hands pressed against a wall (representing “stop-and-frisk” policing).  Control group participants saw a title screen with no pictures and proceeded directly to the survey questions. 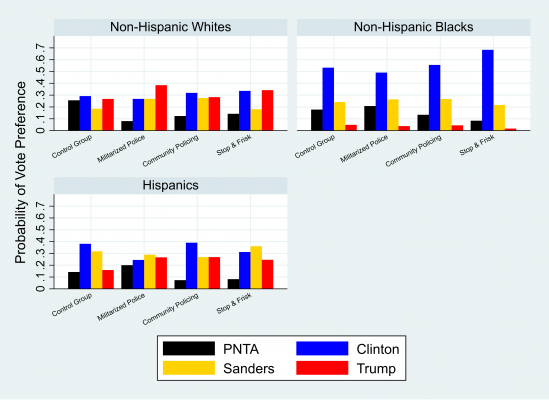 Figure 2 tests whether the effect of image exposure differed depending upon a person’s level of political awareness (operationalized by news consumption); we restricted this analysis to whites since only they were significantly affected by the image treatments.  In the control group (where we hypothesized the most “shyness”), low-awareness whites were substantially more likely to choose “prefer not to answer” than express a candidate preference, and high-awareness whites were substantially more likely to express a preference for Clinton.  In contrast, white respondents exposed to any of the police-civilian interaction pictures were more likely to express a candidate preference than choose “prefer not to answer,” regardless of political awareness.  Importantly, Clinton lost her lead over Trump among high awareness whites who saw an image. 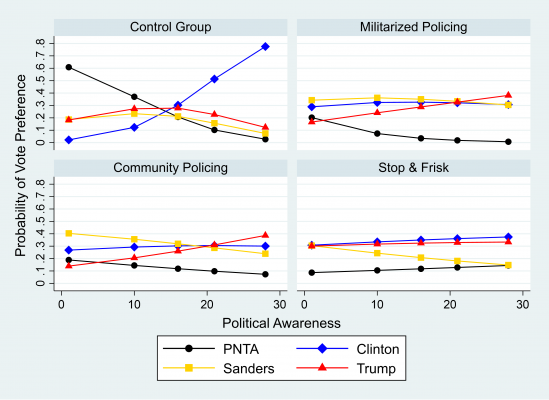 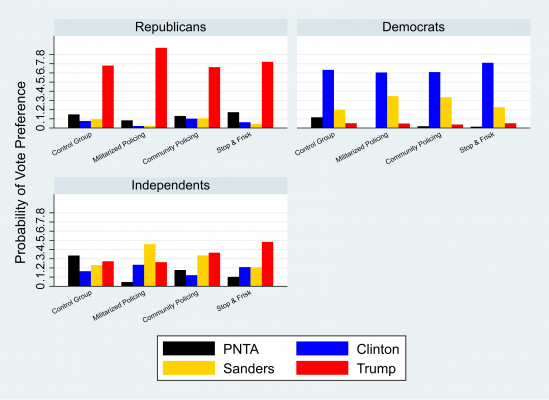 In summary, seeing any image of police-civilian interactions decreased whites’ likelihood of “preferring not to answer” the vote choice question, and seeing the image of the militarized police response also caused a statistically-significant increase in support for Trump, on average.  Digging deeper, the effect of image exposure appeared concentrated among whites who were low in political awareness and politically Independent, causing them to express a candidate preference when they would otherwise be inclined to say “prefer not to answer.”  Finally, image exposure altered the relationship between political awareness and candidate preference among high-awareness whites, decreasing their support for Clinton and increasing support for Trump.

We interpret these results as evidence of a media framing effect on 2016 vote preference. The stream of traditional and social media video and images showing protests, rioting, and contentious confrontations between armed police officers and civilians that permeated the airwaves during the campaign likely influenced some white Americans’ political beliefs and candidate preferences, even if they were not willing to admit that fact to a pollster.

Kevin H. Wozniak – University of Massachusetts Boston
Kevin H. Wozniak is an assistant professor of sociology at the University of Massachusetts Boston. He studies the politics of punishment and criminal justice. He received his Ph.D. in justice, law, & society and American politics from American University in Washington, D.C. He was also a 2012-2013 Congressional Fellow of the American Political Science Association. During his fellowship, he worked as a legislative aid for Representative Bobby Scott (VA-03), a member of the House Democratic Gun Violence Prevention Task Force.

Kevin M. Drakulich – Northeastern University
Kevin Drakulich is an Associate Professor of Criminology and Criminal Justice at Northeastern University. His recent work addresses three interrelated questions. The first question concerns social processes related to crime and its consequences across space—and in particular across neighborhoods and communities. A second line of research builds on the first by asking how people view crime, disorder, and social control processes within their community. Finally, a third line of research follows this line of thought beyond neighborhoods, examining how people view crime, control, and related policies more broadly, and how these views impact political behavior. Underlying all three of these lines of research are two overarching themes: race and racism, and interpersonal interactions and relationships.