The term “woke” has its roots in Black culture but has since been removed from this origin and been co-opted a symbol by those who push back against social justice progress. Staci M. Zavattaro writes that for policymakers and activists to affect change, it is important to understand how the social constructions of “woke” and Critical Race Theory, more specifically, have changed.

During her Senate confirmation hearings for the US Supreme Court this week, Judge Ketanji Brown Jackson endured a series of questions from lawmakers about race, religion, and policing. In several instances, she was asked about Critical Race Theory – or more appropriately “CRT.” Culture wars questions always seem to play out live during US Supreme Court confirmation hearings, and the latest version has focused on CRT and anti-racism.

Why is this sloganeering happening? One explanation is that the word “woke” has moved from its rhetorical roots in the Black community to become weaponized today to pass legislation undoing much of the social justice progress benefitting marginalized populations. Words like woke and associated imagery – including “CRT” – become catalysts to carry out culture war policies harming and aliening people from full participation in democratic society.

The changing meaning of woke

In our research, we chose the word woke because it came to prominence in the American lexicon after police murdered George Floyd in Minnesota in May 2020. The murder at the hands of the state seemed to set off a reckoning, especially among White people, about racism and its deadly effects. Corporations jumped into the movement, turning social media profile pictures into black squares to ideally bring attention to these structural issues. Yet with not much long-term change, such pronouncements often seem like mere marketing ploys.

And that was our point. The word woke and its associated imagery became political calling cards for certain lawmakers to pass legislation curbing voting rights, prohibiting transgender women from competing in women’s sports, changing school curriculum so it does not hurt feelings, and banning and burning books. In this way, we can see how the word woke moved from its roots in Black culture to today’s symbolic politics needing no real meaning anymore because the symbols and words are so powerful.

To better understand how the word woke has changed, we use a theory called phases of the image. That theory from French philosopher Jean Baudrillard explains how something starts with a clear connection to reality then through time can progress into what is called hyperreality. Any connection to a former reality dissipates, allowing a new, socially constructed reality to emerge. A concrete examination of this theory took place in the popular movie The Matrix. In one scene, Morpheus quotes directly from Baudrillard when he says: “Welcome to the desert of the real.” The movie plays between reality and simulation, as do places such as Las Vegas and Walt Disney World. Virtual reality tools popular today also blur these lines. The simulations become the reality.

The term woke was brought to prominence by William Melvin Kelley in a 1962 New York Times essay, meaning the word was birthed in Harlem, the epicenter of Black culture in America. Kelley argued that when words in Black culture are co-opted by White people, they lose their real meaning. The term became popular in 2008 as singer Erykah Badu used it in the chorus of her song “Master Teacher,” and in 2015 Google searches for the word increased after police killings of Black people throughout the US. Today, the term woke is removed from its roots in Black culture to a symbol people use to push back against social justice progress.

With its roots in the Black community, wokeness – meaning to be awake to social oppression – helped bring about legislation such as the Civil Rights Act of 1964. Learning about and being aware of structural racism led to passage of the (albeit flawed) legislation attempting to dismantle some of those barriers to entry for Black individuals. As the word woke floated from its foundations, the term led to backlash against symbolic activism – acts with no real change but meant to make people feel good, such as the aforementioned social media black photos and painting streets with Black Lives Matter. Symbolic acts are hugely powerful, of course, but in our work, we argue how symbolic acts also need accompanying policy change to have any connection to reality. Otherwise, someone might think painting a street in and of itself is enough to move the needle on social change.

The most visible way the term woke has moved into hyperreality is through its rhetorical use in contemporary society. All one must do is look at news outlets to see how the word is being used to denote opposition to any meaningful social justice efforts, indeed even being used as a reason to pass legislation stripping away social progress or putting back into place systemic barriers meant to preserve White power structures. Indeed, using the word woke is a purposeful, powerful tool of mostly right-leaning lawmakers to invoke images of puritanical nostalgia being dismantled by liberal activists.

This is why we chose to use “CRT” as an example in our work. Critical race theory is an academic field of inquiry that began from a legal perspective to interrogate structural, systemic barriers to equal access and treatment. CRT and woke as symbols and rhetoric are lumped in together to mean anything someone sees as threats to an idealized image of America. When asked to define either term, lawmakers cannot – which is exactly the point. In a hyperreality, the image is more important than reality. A pundit summed it up nicely: “We have successfully frozen their brand — ‘critical race theory’ — into the public conversation and are steadily driving up negative perceptions… We will eventually turn it toxic, as we put all of the various cultural insanities under that brand category.”

From a public administration perspective, the implications of our work are clear: understand the power of symbolic politics to affect change. Our research focused on the term woke and its unmooring from roots in the Black community as a mechanism to understand some of the public battles playing out today. Knowing rhetorical roots allows public administrators, stakeholders, and activists to learn the symbolic rules to play a similar game. 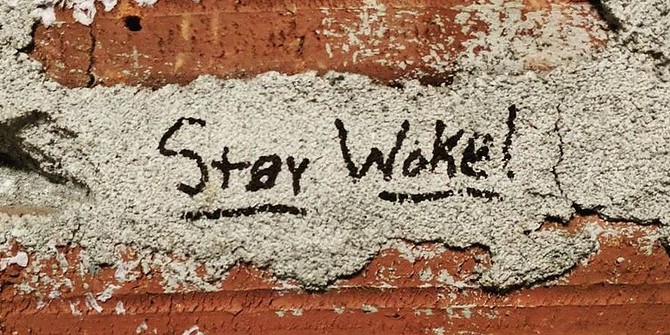