In a 13 July speech in Philadelphia, US President Joe Biden called the fight around voting laws the “most significant test of our democracy since the Civil War.” Is he right? In this explainer, Julie Norman breaks down the voting rights battle now unfolding in Congress and discusses what’s at stake.

What are the new voting laws?

In the first six months of 2021, 17 state legislatures passed 28 new voting laws, with nearly 400 additional bills proposed. The laws vary by state, but they have included provisions such as reducing the number of ballot drop-boxes, limiting or banning 24-hour voting and drive-through voting, altering absentee voting processes, adding voter identification requirements, limiting assistance to voters, and expanding the authority of poll-watchers, which has led to concerns about potential voter intimidation. Georgia’s highly publicised new election law would also expand the state legislature’s power over the State Board of Elections and local county boards.

Why are the laws controversial?

Democrats argue that the new laws restrict access and effectively make it harder for citizens to vote. Further, they say that the laws disproportionately affect minority voters, specifically black, Latino, and indigenous communities. Republicans argue that the new laws are necessary to ensure that future elections are secure, and to protect against voter fraud. They also emphasise that many of the laws focus on voting measures that were put in place in 2020 in response to the COVID-19 pandemic, and are effectively a reset to the status quo.

What is the context?

The current debate has been shaped by both recent and historical events. Last year saw a renewed focus on election procedures and voting rights, when many states took steps to make it easier to vote by mail or via drop-boxes in response to access issues raised by the pandemic. During the election, and then after it, former US President Donald Trump rallied against such measures and claimed that the election was stolen due to widespread voter fraud, despite the dismissal of over 50 lawsuits by state and federal judges due to lack of any evidence to sustain his claim. 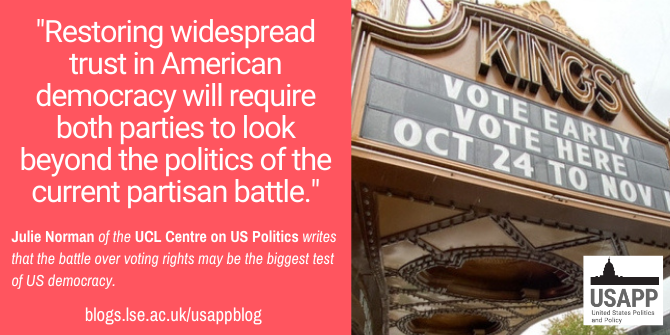 The debate is also highly emotive due to the history of voter suppression in the United States, especially in the Jim Crow South, when mechanisms such as the poll tax and “literacy tests” were used to disenfranchise black voters. The landmark Voting Rights Act (VRA) of 1965 prohibited racial discrimination in voting, but Democrats note that the VRA has been weakened by recent Supreme Court rulings, most notably 2013’s Shelby County v. Holder as well as this year’s Brnovich v. Democratic National Committee.

What options do both parties have?

Democrats are trying to counter those efforts via federal legislation, but their options are limited. The Democrats’ sweeping For the People Act was blocked in the Senate by Republicans, where 60 votes are effectively needed to pass most legislation. Biden and some Democrats are now focusing efforts on passing the narrower John Lewis Voting Rights Advancement Act, which would re-bolster the VRA, and has the support of centrist Democrats like Joe Manchin and at least some Republicans. But getting over the 60-vote threshold is still unlikely. Some Democrats are pushing for changes to the filibuster rule to change the 60-vote requirement to a simple majority for voting-related legislation, but Biden has not endorsed that option.

What does the voting rights battle mean for American democracy?

Biden’s 13 July speech was delivered in part to emphasise the right to vote as a sacred shared ideal. Indeed, members of both parties argue that their approach is necessary to ensure free and fair elections, with Democrats emphasising voter access and Republicans stressing election security. Both are motivated by political considerations as well, even though research indicates that making voting easier via measures such as mail-in ballots does not lead to a partisan advantage.

Democrats are right to note that there was no widespread election fraud in the last presidential election, undermining urgent calls for election security. But that doesn’t change that fact that over 50 percent of Republican voters believe that the election was stolen, threatening the faith in US institutions that many took for granted. With the 6 January storming of the Capitol still in very recent memory, restoring widespread trust in American democracy will require both parties to look beyond the politics of the current partisan battle.