As we head into the 2020 presidential election, Gustav Meibauer and Jörg Meibauer reflect on how many candidates are often not always completely truthful or accurate in what they say to prospective voters. They give an overview of the different types of deceptive communication candidates may engage in in order to cultivate a favorable impression. From lying to bullshitting to obscuring, they suggest that these forms of deceptive communication may now be baked into the US system of presidential politics.

During an election season, some mismatch is probably to be expected between fact and fiction in candidates’ rhetoric. As candidates are not (yet) in office, they do not have the information and intelligence that, for example, presidents enjoy (who still frequently get it wrong). At the same time, candidates do not (yet) carry the burdens of office. They have more leeway to suggest policies which may be ineffective or impossible, but (so they may think) likely to garner votes. This allows candidates (and their campaign staff) to try to emphasize or minimize policy concerns and set an agenda that resonates with their audience. In so doing, they try to play to their own strengths and weaknesses to convince the voters of their expertise, character and suitability for office. Especially in a wider field in the primaries, candidates also need to differentiate themselves from others. They must thus carefully create and curate their preferred impression on the electorate.

In so doing, however, they cannot simply say whatever it takes to get elected. First, because of the president’s outsized role (especially in foreign affairs), candidates are under intense scrutiny. Voters want (and deserve) to be informed of the candidates’ varying aspirations, leadership qualities and policy suggestions. Simultaneously, rivals can quickly profit if “gaffes” go viral. Second, electoral rhetoric carries weight beyond elections, for example where presidents are evaluated against their campaign promises. Careful candidates may want to avoid overpromising as backing away makes them appear indecisive or flip-flopping. (Even President Trump, never shy to make outsized claims, has tried to ret-con his past electoral rhetoric for this reason.)

The overwhelming difficulty of complex political questions, the lack of information and severe punishment for mistakes on the one hand, and an electoral process that (over)values certainty as an indicator of competence, trustworthiness and leadership on the other, make deceptive communication strategies attractive during election season.

The first strategy is flat-out lying. A candidate is lying when, to deceive her audience, she makes a claim that she does not believe. For instance, she might firmly believe in man-made causes for climate change. When asked, however, she says that climate change is just a natural phenomenon. In this case, the lying politician certainly cares about the truth; in that she wants to hide it from her audience (perhaps she is in the pockets of “big oil”). Lying is a potentially effective but risky strategy. At least in theory, it leaves little room for evasion if detected. Of course, the routine way in which mainstream politicians in the US have started to embrace “alternative facts” and outright lying as a political strategy has raised doubts as to lying’s inherent riskiness. Echo chamber effects, digital propaganda networks and hyperpolarization may only further contribute to such a degradation of political discourse conditions.

The second strategy is bullshitting. Before we talk about what we mean in this context, let’s pause for a minute to explain why we use this term, and why it’s distinctly different from lying. In his 2005 book, On Bullshit, Harry G. Frankfurt distinguished the term from lying, explaining that ‘bullshitting’ means to communicate to persuade irrespective of the truth. So the bullshitter’s claims are masked as ordinary speech even though she does not really care whether the content of her claim is true or false – i.e. they only have a loose concern for the truth. Importantly, though, she does not want her indifference to the truth known and/or detected by their audience. Candidates may bullshit to mask contradictions in their rhetoric. For example, claiming that Mexicans are rapists and gang members may then go hand in hand with portraying them as good people. 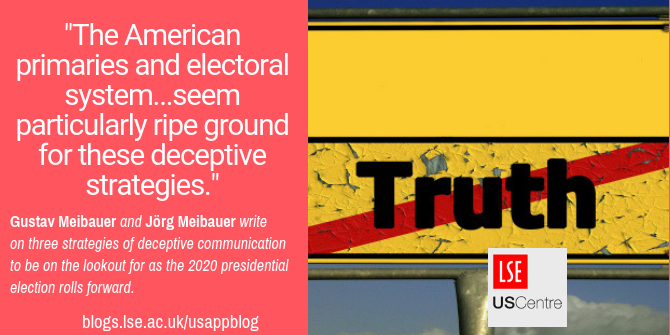 The bullshitter may care for the truth in that she carefully avoids being committed to it. She does not want to produce an outright lie, either. Both risk her being pinned down to specific statements, “fact-checked” and so forth. For instance, a politician may bullshit to avoid a correct, wrong, or indeed any specific answer to the question under discussion. When pressed on the gap between rich and poor in the US, a candidate might only repeat that this is an example of “Republicans and Democrats not coming together to solve America’s problems”, rather than an issue that requires actual policy proposals. We may call this “evasive bullshitting”.

It may well happen that both the bullshitter and her audience are aware of the bullshit produced. For example, a candidate may be asked about some of her former statements that play on racist overtones. In answer, she claims that she is the “least racist person in America”. Of course, President Trump has made a particular habit of this type of utterance, frequently misidentified as an exaggeration but perhaps better understood as “bald-faced bullshitting”.

The third strategy is to speak in an obscure manner. This relates to how speech is delivered because it concerns how something is expressed (or left in the dark). For example, when asked about climate change, a politician might tell a childhood story about admiring the sunrise together with her grandpa. Again, obscuring avoids being “pinned down” to concrete promises or suggestions. In contrast to a bullshitter, however, the obscurantist may firmly believe what she says, for example if her obscure story is based in esotericism or conspiracy theories. Repeatedly obscuring statements or answers may create a bad impression in an audience that values specificity, and so has its downsides.

Can we cut through these strategies of deception?

Disentangling these strategies, which are either deceptive or bordering on deception (because of the speaker’s deliberate avoidance of clarity) is not easy. Imagine that a candidate is asked about Chinese foreign policy. She answers that “China has a strong hold on Africa because of Mao’s vision”. We may think of different motives for this bullshitting and/or obscuring claim. The politician might find her words to be trivial, but it could be the only claim that comes to her mind. Alternatively, she might find this a complex and profound statement, but feels forced to reduce its complexity so that her audience can understand it. She may have made the claim on mere intuition and cannot actually offer further evidence for it. Finally, the politician could well know that she lacks sound knowledge about Chinese foreign policy, but, under pressure, decides to bullshit or obscure as a substitute for rational argumentation.

Lying, bullshitting, and obscuring things are strategies to avoid truthful statements, including the admission that one does not know the truth. They are deeply rooted in human cognition and fulfill important social functions. They may even be entertaining on occasion.  Still, in political discourse, we should probably be vigilant against them and uphold at least some balance between deception and truth-seeking. Increasing vigilance may in part be an educative task: bullshit receptivity has been linked to lower levels of reflectivity and cognitive ability. At the same time, it has been suggested that deceptive strategies are more likely when speakers face an obligation to provide an opinion, and that they are sensitive to a context-dependent ease and acceptability of bullshitting. The American primaries and electoral system, with its sequence of televised debates, town halls, and other high-stakes situations in which multiple candidates vie for impressing audiences and the wider electorate with catchphrases and signature pitches, seem particularly ripe ground for these deceptive strategies.

Jörg Meibauer – University of Mainz
Jörg Meibauer is Emeritus Professor of German language and linguistics at the Johannes Gutenberg University in Mainz, Germany, where he has researched on the grammar-pragmatics interface. On the linguistics of lying, he has published “Lying at the semantics-pragmatics interface” (De Gruyter Mouton, 2014). He has also edited “The Oxford Handbook of Lying” (Oxford University Press, 2019).