Since the reality of the threat of COVID-19 became apparent, President Trump has taken little meaningful action to protect Americans from the pandemic. Analysing the now lame-duck president’s tweets, Corina Lacatus and Gustav Meibauer argue that Trump’s decision to make populist appeals over the course of the election did not have the intended effect of increasing support from his base. Instead, Trump’s obvious lack of a competent COVID-19 management strategy may well have doomed him electorally.

With Joe Biden’s victory now confirmed, analysts have moved on to try to understand the whys and hows of the 2020 presidential election. Among its many distinctions, the dominance of COVID-19 in media reporting, polling and much of social and political life has been a constant backdrop. In ongoing research, we are interested in how the pandemic shaped the contenders’ electoral strategies and rhetoric.

Donald Trump’s apparent unwillingness to take meaningful action to fight the pandemic has already been noted elsewhere with much bemusement, given that “the president’s passions are supposed to be aligned with the most pressing questions facing the country”. This one, however, could “hardly be bothered to tap out a tweet” – about the crisis and its management, that is. Why would this be the case? Why not adapt to crisis more fully?

Crises (whether real or perceived) influence what voters want, and what they prioritize. Contemporary right-wing populists are often expected to profit electorally from them. Latin and South American populism is tightly connected to (narratives of) crisis. Across the pond, the combination of political, economic, and cultural crises has offered populist parties opportunities for electoral expansion across Europe.

Donald Trump’s own electoral success has been tied to his ability to create crises that only he can resolve. The COVID-19 pandemic posed a different problem for Trump, though. This crisis was not, initially, of his own making. He could not easily control its narrative. Such a crisis may negatively affect the electoral chances of right-wing populist incumbents.

As leaders in office, even right-wing populists are expected to manage crises effectively. The material nature of (many of) the pandemic’s effects required the Trump administration to focus on actual crisis management, for which it was, partially because of Trump’s “draining-the-swamp” anti-elitism, ill-equipped. Already at the beginning of the pandemic, it was likely that Trump’s voters would soon bear its costs. One might have expected then that Trump would have to face their anger for not at least trying to competently manage this crisis. Moreover, this crisis was challenging Trump’s existing electoral strategy because it required reliance on expert scientific guidance, which sat uneasily with Trump’s anti-science and anti-elitist platform.

Unless the Trump campaign was unable or unwilling to anticipate the possibility that not managing this crisis could negatively affect his electoral chances, or thought they could offset this disadvantage by cheating, adaptation to the crisis would have been the strategy we might expect. This might have included the promotion of bi-partisan solutions, stressing togetherness or social cohesion, signaling empathy for the weak and the sick, praising the bravery of first responders and essential workers, or focusing on practical problems and solutions.

Instead, Trump’s showed continued disregard for this expected behaviour. Nowhere was this more evident than in Trump’s Twittersphere. During the first months of the COVID-19 pandemic, Trump’s tweets were dominated by four main themes (Figure 1) – his main concern remained the presidential campaign ahead of the 2020 election, virulent attacks on most media outlets and his brazen hyper-nationalism so familiar to his voter base. Compared to these tried-and-tested themes, his communication about the administration’s response to the pandemic came second.

At the onset of the pandemic, in early March 2020, Trump attempted to downplay the possibility of the virus spreading across the US. He tweeted: “So last year 37,000 Americans died from the common Flu. It averages between 27,000 and 70,000 per year. Nothing is shut down; life & the economy go on. At this moment there are 546 confirmed cases of Coronavirus, with 22 deaths. Think about that!”

By mid-March, Trump’s Twittersphere integrated more references to COVID-19, mostly regarding crisis management policies, indicating increased evidence of adaptation to the crisis in response to worsening impact across the US. Trump maintained his harsh criticism of the Democratic party and, by contrast, advanced a positive view of his own administration. For instance, on March 11, he wrote: “Our CoronaVirus Team has been doing a great job. Even Democrat governors have been VERY complimentary!” He didn’t simply present his administration’s crisis management as suitable, which may well have been expected. Rather, in Trump’s eyes, all policies were made possible only by his own effort to mobilize against the corrupt and flawed political actions of the Democratic Party. Trump continuously downplayed unity, togetherness etc. in the crisis response. 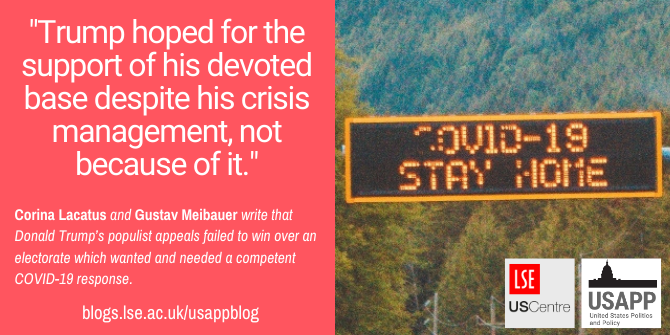 Indeed, by mid-April, Trump’s Twitter was clearly back to “business as usual”, as Figure 2 shows. Increasingly, he either ignored the crisis or integrated it in existing electoral strategy. Rather than adapt to the grave impact COVID-19 had on American society (millions of newly unemployed by late March, 10,000 deaths by April 5), the crisis was fully politicized and any shortcomings attributed, variously, to Democratic congressmen deemed unwilling to carry out their work, Democratic governors portrayed as incompetent and a threat to American freedom, or unclearly defined foreign influences (mostly China).

Figure 2 – Disaggregated categories of tweets, by theme, from @realDonaldTrump, March–May 2020 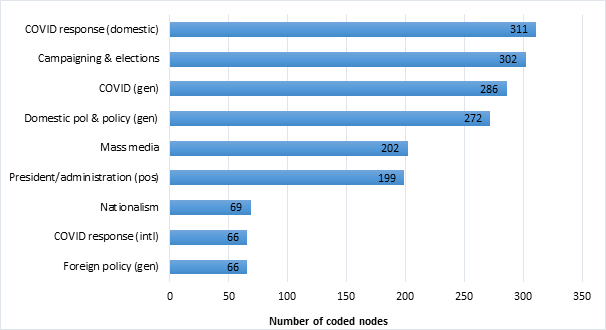 Trump used medical expertise only where it aligned with his electoral rhetoric or legitimized his competence and leadership. He integrated scientific advancements to combat the virus into a personal badge of honor to substantiate his rhetoric of American exceptionalism. Despite the risk of alienating voters due to ineffective crisis management, then, Trump opted for continuity with previous electoral rhetoric. He attempted to rhetorically re-frame and subsume the crisis, downplay it in favor of previous rhetoric or shift blame for it to others.

That is because adaptation to crisis also presented an electoral risk: it contradicted key themes which had propelled him to electoral success before. Trump had created a political persona that persisted in a habitus of populist opposition to what elites, experts and bureaucrats expect or desire him to do. Thus, any adaptation of his rhetoric to the crisis could be interpreted by his electorate as co-optation by the very system Trump routinely criticized. It might demobilize those key supporters who at this point constituted his biggest chance of re-election.

The Trump campaign therefore gambled on the sustainability of partisan mobilization even as the crisis had pervasive effects on his supporters. This strategy hoped that a large-enough percentage of American voters valued consistency with right-wing populist themes – in fact, might find this familiarity appeasing – more than competent crisis management. Trump hoped for the support of his devoted base despite his crisis management, not because of it.

This is important beyond the bounds of American politics. COVID-19 is likely to feature prominently in future electoral campaigns given its global nature and impact. The insights derived from Trump’s electoral strategy during a large-scale crisis inform how we can think about other right-wing populist incumbents and their attempts to stay in power. Like Trump, they may well forego effective crisis communication and crisis management in favour of continuity with right-wing populist rhetoric.

Corina Lacatus – Queen’s University Belfast
Corina Lacatus is Hillary Rodham Clinton Fellow at the Queen’s University Belfast, where she researches international organisations’ responses to complex emergency crises of public health and forced displacement. She holds a PhD in International Relations from the London School of Economics and a second PhD in Germanic Languages and Literatures from University of California, Los Angeles.