As we head into the first round of debates between the candidates for the Democratic Party’s 2020 presidential nomination, former Vice President Joe Biden has a commanding polling lead over the other contenders. Ronald Ranta writes that Biden’s polling lead may in fact be masking a fragile position. As the field narrows, he argues, Biden may lose ground to candidates with greater enthusiasm behind them, such as Massachusetts Senator Elizabeth Warren.

Ever since Donald Trump’s victory in the 2016 Presidential elections Democrats have been looking towards 2020 and a shot at redemption. Though the process of selecting the nominee will officially begin on the 3rd of February 2020 with the Iowa caucus, the contest started in earnest in late 2018. Since then, the candidate field has grown exponentially, and there are now over two hundred aspiring candidates! Most of these have no real chance of winning the nomination, and for them it is either an exercise in publicity or futility. In a few days the primary contest will reach its first major milestone with the beginning of a series of TV debates featuring the main contenders.

The main field consists of over twenty candidates; the New York Times recently put the number at twenty two. It features a staggering array of characters, backgrounds and personalities, coming from across the party’s ideological spectrum, representing blue dogs, moderates, progressives and openly socialists. The candidate field consists of, among others, seven senators, six current and former congressmen and women, three current and former governors, two mayors, a former Housing Secretary, a renowned author and an entrepreneur. Barring any unforeseen last minute surprises, and there might indeed be a few, depending on how well the top candidates perform, the Democratic primary field is set.

In order to appear in the first TV debates on the 26th and 27th of June candidates were required to secure donations from 65,000 individuals and gain at least one percent in either three qualifying national or early state polls. Even though the bar was set very low, allowing for twenty candidates to qualify for the debates, several potentially strong candidates did not make the cut, these include the governor of Montana Steve Bullock, who entered the race late, but who is still hopeful of making an impact.

Because of the large number of candidates, it might be useful to think of the field in terms of a front runner, a second tier, in with a chance, and the rest. Despite the wide range of candidates, all eyes will be focused on the perceived front runner, former Vice President Joe Biden, who announced his entry into the fray in late April. The second tier is far more diverse and includes the Senator from Vermont Bernie Sanders; the Junior Senator from California Kamala Harris; the Senator from Massachusetts Elizabeth Warren; and the surprise of the race so far the openly gay Mayor of South Bend Indiana Pete Buttigieg. Including Biden, these candidates have together averaged around 75 percent in most polls. Among those with an outside chance are former representative Beto O’Rourke from Texas, whose campaign started with a bang but has since fizzled; New Jersey Senator Cory Booker; and the Senator from Minnesota Amy Klobuchar. Other than the above, no candidate has consistently polled more than 1 percent in either national or early state polls.

As a party known in recent years for its diversity, it might be a surprise that the front runner is a septuagenarian heterosexual white man. If elected Biden will be the oldest President in US history; interestingly, Biden is not the oldest candidate, at 77, Bernie Sanders is a year older. Nevertheless, Biden is in the lead in all of the national and state polls, and based on his high name recognition, high favourability numbers, strong support among party members, older voters, union workers, and African-Americans, and the history of performance of Vice Presidents in primaries, the nomination appears to be his to lose. 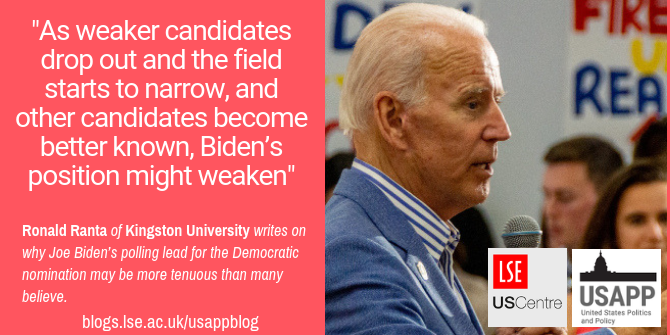 “Joe Biden” by Marc Nozell is licensed under CC BY 2.0

Though the primary elections are still over nine months away, and considering the high degree of uncertainty present in the early polling, Biden has led in all of the national and state polls. In most national polls Biden receives on average a third of the votes, with Sanders, Warren, Buttigieg and Harris on 15 percent, 12 percent, 10 percent and 8 percent respectively. The same is true with regard to the states’ polls. In the first four primary states, Iowa, New Hampshire, Nevada and South Carolina, Biden is on 30 percent or more, followed by Sanders, Warren, Buttigieg and Harris. In fact, Biden is in the lead in each and every one of the states that have been polled, leading over his rivals even in their own states, over Harris in California; over Warren in Massachusetts; and over O’Rourke in Texas.

Why is Biden performing so well?

This question is particularly interesting given the fact that he has been plagued by several controversies, including accusations of inappropriate touching and his conduct during the Clarence Thomas Supreme Court confirmation process in 1991. In most polls conducted among Democrats his support appears to be based on name recognition and electability, and is not related to any specific policy or position. This perception is supported by a number of polls that have shown Biden in the strongest position to beat Trump; though others, such as Sanders, Warren, Buttigieg and Harris have also done well in these polls. Trump’s own internal campaign polling, which has been leaked to the press, has shown Biden beating the President by over ten points nationally and in all of the battle ground states, including Georgia, Ohio, Florida, North Carolina and even Texas! Trump’s continuous trolling of Biden on twitter suggests he is the candidate the President and Republican Party are most fearful of and focused on.

Taking all of the above into account and looking at the polls and reading between the numbers, however, Biden’s position is much more fragile than it seems. Biden is polling in the high twenties and low thirties, but without great enthusiasm behind his support. As weaker candidates drop out and the field starts to narrow, and other candidates become better known, Biden’s position might weaken. Looking at the main field, over a quarter of the support in the polls has so far gone to lesser known candidates. This means that there is a lot of scope for candidates to acquire additional votes and gain momentum at Biden’s expense. This might already be happening with the recent surge by Elizabeth Warren.

Will Biden clinch the nomination? The upcoming debates will definitely help in answering this question. However, given his propensity for gaffes, the strength of his main rivals, the lack of great enthusiasm behind him, and the fact that the first primary vote in Iowa will only take place in nine months, his position as the front runner should not be overstated.