In recent weeks President Trump has put increasing pressure on Iran over its nuclear program, with the Persian Gulf nation responding by shooting down a US drone and harassing shipping in the Strait of Hormuz. Christian Emery writes that President Trump’s ability to harm the Iranian economy through sanctions, over the objections of China and the EU, illustrates that American power is going nowhere. He argues that Iran has been flawed in its responses; appealing to the EU is likely to be ineffective and attacking nearby shipping risks provoking an armed conflict with the US.

This month leaked emails from the British ambassador in Washington describing a divided and incompetent  White House have provoked a predictably undiplomatic twitter-lashing from Donald Trump, but the escalating crisis in the Persian Gulf vindicates Sir Kim Darroch’s assessment. In the wake of pulling out of the Iran nuclear deal last year, Trump believed a policy of ‘maximum pressure’ would force Iran to accept much more severe restrictions on its nuclear programme and make fundamental changes to its domestic and foreign policies. Instead, it is retaliating against Trump’s bludgeoning sanctions by increasing its stockpile of enriched uranium, shooting down American drones, and harassing shipping in the Strait of Hormuz. This has forced Trump into a high risk, low reward display of American military deterrence in the Persian Gulf.

Trump’s abrogation of the Iran nuclear deal epitomises his and his supporters’, disdain for international agreements, international institutions, and President Obama. But Trump’s failure to anticipate that Iran’s leaders might not just sit back as he choked their country to death has led to outcomes that his supporters will be far less comfortable with. As candidate for president in 2016, Trump lambasted America’s entanglement in ‘stupid’ wars in the Middle East and promised a less interventionist foreign policy. Now he’s brought America to within 10 minutes of launching missile strikes against Iran without, he admits, even considering that this could escalate into a wider conflict. “You’re not going to need an exit strategy”, he told reporters.

Forcing ‘freeloading’ allies to take more responsibility for their own security has been another consistent theme in Trump’s pronouncements about foreign policy. Yet, having created a crisis that threatens the security and commercial interests of multiple nations, there’s been almost zero enthusiasm for the Pentagon’s plans to enlist allies to help maintain freedom of navigation in the Persian Gulf. America’s friends in Middle East, having helped goad Trump into a more confrontational policy against Iran, are happy to watch Washington do the heavy lifting.

Faced with so many suboptimal outcomes, Trump should, but clearly won’t, conclude that he has fundamentally overestimated America’s ability to pummel weaker states into submission. This is also backed up by political science research showing that states with vast economic and military resources are more likely to underestimate the resilience of weaker states.

Yet, herein lies a paradox. Trump’s scorched earth approach to wrecking the Iranian economy is a shocking demonstration of raw American structural power. That this has not been in the service of sensible or achievable foreign policy goals is a separate matter. The lesson for the rest of the world is that even an incompetent American President can ride roughshod over their interests. For all its failings, Trump’s Iran policy challenges the declinist view of American power.

Consider this: the Iran deal is backed by, amongst others, the two largest economies in the world, the European Union and China. Together they amount for about 35 percent of the world’s economic output and 3 of the 5 permanent seats on the United Nations Security Council. China is also Iran’s biggest customer for oil. Yet both have been completely powerless to protect the country from the wrath of US secondary sanctions. And whilst the EU is hardly likely to rip apart the transatlantic alliance for Iran’s sake, particularly when their facing a resurgent Russia and a rising China, its impotence is not just due to a lack of political will. The EU desperately wants to save the nuclear deal; the simple fact is that it can’t. And until they possess a currency that can challenge the dollar, and with that a financial system outside US jurisdiction, cries of the end of American economic hegemony are premature. 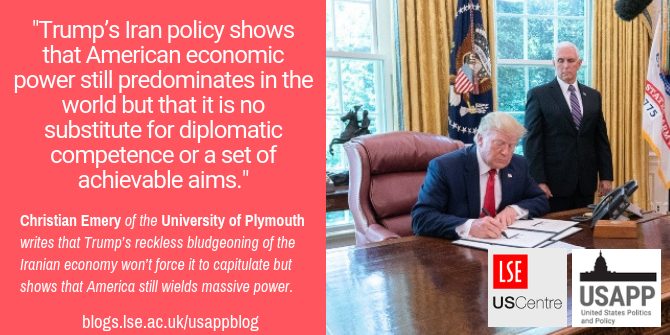 When Trump first announced his decision to withdraw from the JCPOA, in May 2018, Tehran decided not to follow suit for three reasons. Firstly, the Europeans were horrified by Trump’s vandalism and Iran saw an opportunity to drive a wedge between two powers with a long history of cooperating against it. Secondly, the US allowed Iran’s biggest oil customers to gradually reduce, rather than eliminate, their purchases of Iranian oil. Trump allowed this because he wanted lower gasoline prices for American consumers but oil prices were still significantly higher than when Iran signed the deal in 2015. Thirdly, Iran expected the Europeans to provide economic relief from US sanctions.

Then, in May 2019, Trump shocked markets by announcing that his administration was seeking to eliminate Iran’s oil and gas exports to zero. As soon as the full force of US sanctions came into force, China, Japan, India, Turkey, and South Korea all reluctantly slashed their purchases. In June, Iran exported not much more than 10 percent of the oil it was exporting in October. The IMF now forecasts that Iran’s economy will shrink by 6 percent in 2019, with inflation topping 40 percent. Iran’s situation became desperate.

Iran’s leaders responded with a two-track strategy. The first track ramps up pressure on the Europeans, by creating deadlines for them to increase their economic support that if not met trigger violations of the nuclear deal. The aim being to trade these easily-reversed transgressions back for concessions so if/when a deal is done so Iran will not give back more than it originally conceded. What they most want from the Europeans are mechanisms to circumvent the dollar as payment for crude oil and EU protection for European corporations who want to trade with Iran.

The second track is to attack and generally harass shipping in the Strait of Hormuz. Tehran wants the world to know that if Washington continues to prevent Iran from exporting its own oil and gas, it will not be the only one to suffer. Its strategy is based on a calculation that Trump will never risk a major military conflict. Therefore, if Iranian forces continue to harass shipping, and Trump doesn’t retaliate, and American deterrence will be exposed as a paper tiger. On the other hand, if he does launch limited military strikes, Trump will face a furious backlash abroad and seriously damage his re-election chances. Iranian leaders would likely benefit from a nationalist surge that would help them weather the political fallout from a protracted economic crisis.

Both tracks are flawed.

The strategy of nuclear blackmail is flawed because it is based on an unrealistic expectation of what Europe can do to protect the Iranian economy.  The EU well understands that Iran needs economic incentives to maintain its JCPOA obligations, but it can’t force European corporations to trade with Iran if that means they are blacklisted from the US financial system. A so-called Blocking Statute that in theory forces European companies to ignore certain US sanctions, and lets them seek compensation for lost trade in EU Courts is not being enforced. Even it was, the legislation doesn’t actually penalise corporations that comply with sanctions and companies can cite all kinds of other reasons for ceasing operations in Iran such as concerns about security or money-laundering. Few expect INSTEX, a financial mechanism designed to enable European companies and Iranian companies to trade without any direct financial flows, thereby bypassing US jurisdiction, to provide more than symbolic benefits. It also doesn’t apply to third parties, so it’s not open to Chinese or Indian companies (and major differences on compliance standards means it probably never will).

The strategy of attacking oil tankers is flawed for a number of reasons. Firstly, the EU is unlikely to take more risks to support the Iranian economy if it’s simultaneously attacking member states’ shipping. Secondly, Iranian forces could easily miscalculate and provoke a much stronger reaction than they anticipated. It’s fair to say that basing a policy of controlled escalation on a settled understanding of Trump’s thinking is ill-advised. Trump may know that a war would wreck his chances of re-election, but it’s easily possible that Trump could win in 2020 and renew his confrontation with Iran with far less restraint.

Can Tehran wait out Trump?

Trump may have also booby-trapped any future attempt to revive the JCPOA. Secondary sanctions, those that attempt to coerce non-US actors by denying them access to the US financial system, are effective but blunt and inflexible instruments. Their implementation relies on the diligence of thousands of smaller decision-makers all the way from CEOs of multinational companies to individual compliance officers. When sanctions are revoked, there’s no shortage of willing investors, but it takes years for the big financial organisations to gain sufficient confidence to lend them the capital required for major projects. The ease with which the US has bullied customers and investors out of the Iranian market, and enacted new sanctions targeting organisations that are big players in the Iranian economy, means a culture of risk-aversion will linger in the financial system for years.

Trump’s Iran policy shows that American economic power still predominates in the world but that it is no substitute for diplomatic competence or a set of achievable aims. Having failed to force Iran back to the negotiating deal, he clearly has no idea what he’s now trying to achieve. A sensible leadership would de-escalate the situation by ruling out military strikes and quietly allowing states to buy Iranian oil. Iran has zero interest in disrupting tanker routes when its own oil and gas must travel through the Strait of Hormuz. For its part, Iran could buy time by agreeing to at least discuss a broader deal that addressed concerns about the sunset clauses that limit Iranian nuclear enrichment and military transfers to pro-Iranian groups in Syria and Lebanon. In the end, keeping Iran within, or close to within, the JCPOA until there is a new administration in Washington is undoubtedly the best hope for a peaceful outcome.

Christian Emery – University of Plymouth
Christian Emery is a Lecturer in International Relations at the University of Plymouth. He completed his PhD at the University of Birmingham and was a Fellow in the Department of International Relations at the London School of Economics between 2010 and 2013. He is the author of US Foreign Policy and the Iranian Revolution and several articles and book chapters on US foreign policy and US-Iranian relations.