Canada’s quiet complicity with the increasingly elastic US border

Canada’s quiet complicity with the increasingly elastic US border

For the past two years, much attention has been paid to the US government’s heavy-handed enforcement practices at its southern border. Emily Gilbert writes that these practices are also taking place on the US-Canada border where refugees are similarly denied the ability to make asylum claims because of their country of origin. She draws attention to the elasticity of the US’s northern border; shifting jurisdictions and enforcement authority often mean that border policing is detached from the border itself.

During July, 2019, President Trump announced several initiatives to drastically limit the number of asylum claims being made at the border. First, an interim final rule was issued that applies to the US-Mexico border, which states that, with only a few exceptions, migrants who travel to the US through another country before they come to Mexico cannot apply for asylum in the US; it is expected that they will seek asylum in one of the other countries that they have travelled through. Since most asylum seekers at the US’s southern border have arrived in Mexico from elsewhere—predominantly in Latin America, but increasingly from countries in Africa—the interim final rule means that they will be ineligible to claim asylum in the US. As a consequence, it is expected that many more migrants will attempt to seek refuge in Mexico.

Just two weeks after this rule was issued, President Trump announced a more expansive bilateral agreement with Guatemala. While the details are still vague, it is understood that Guatemala has agreed to be designated a safe country for refugees; to receive asylum seekers who have been rejected by the US, especially those from neighbouring Honduras and El Salvador; and to process their claims.

The main objective of these initiatives is to pull border functions well away from the physical border so as to limit the ability for asylum seekers to make their claims. This kind of extension of the border into other countries has become increasingly common practice as countries of the Global North seek to externalize the border in their efforts to thwart refugee resettlement, since according to the UN Refugee Convention, signatory countries are obliged to hear asylum claims from anyone who arrives  in their territory.

This has been shown extensively vis-à-vis the Canada-US Safe Third Country Agreement (STCA) which has been in place since 2004. As with the US’s most recent agreements, the objective of the STCA has been to make it almost impossible for asylum seekers to make a refugee claim at official ports of entry along the Canada-US land border. This has forced asylum seekers to adopt more circuitous routes at unofficial border crossings: indeed, since the election of President Trump, over 50,000 people have crossed into Canada from the US at unofficial crossings, so as to circumvent the STCA. In the process, these migrants are made much more vulnerable: at least two people have died, and several asylum seekers have had to have fingers and toes amputated because of frostbite endured on their journeys. 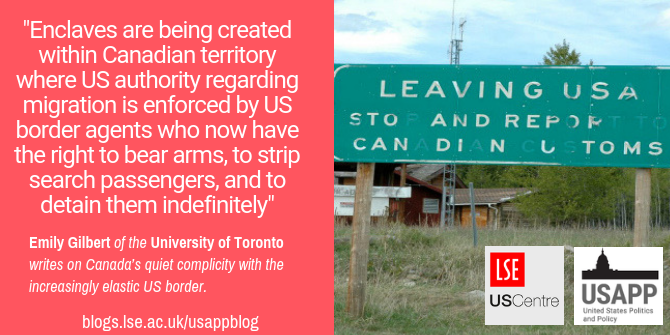 “Abandoned border” by mtsrs is licensed under CC BY 2.0

What has received less attention is how this territorial extension of border functions is used not just to limit asylum claims, but also rights-claims and accountability. As Erfat Arbel has argued, the STCA renders the Canada-US border static but also shifting: both immobile and mobile. This is clear with respect to how the jurisdiction of civil rights is defined. While Charter protections are supposed to be available to all those who are on Canadian soil, regardless of their status, the courts have ruled that asylum seekers denied entry under the STCA will not be determined to have entered Canada. The result is a paradox: the STCA reinforces the principle of a hard border, but asylum seekers are not recognized as having crossed that border, and hence cannot avail themselves of Charter rights.

While this malevolent attitude to refugees warrants deep critique, what is often less remarked upon is how the border is not just extended, but also made to snap back quickly into place, most often to both limit rights-claims and the accountability of border officials.

Some of the other border initiatives between Canada and the US show how the notion of an elastic border—a border that is stretched wide but then pulled taut—is being augmented and expanded, with troubling implications. Under the Shiprider Agreement, vessel patrols in shared waterways can be jointly operated. As the marine border is crossed, authority switches to the host country, which facilitates the hot pursuit of suspects. Further, all designated officers are bestowed with enforcement powers on both sides of the border. Thus the border is both static—as the transition of authority denotes—but policing jurisdiction is unhinged from the territorial border as designated officers have full powers on either side. And yet, even as they are able to enforce the local law, officers are not necessarily subject to it. As the legislation accompanying Shiprider clearly sets out, US law enforcement officers will be subject to the authority of their home organization, and they cannot be compelled to participate in any internal reviews of their actions.

A similar tension is in place in the customs preclearance programs being implemented in Canada. Preclearance allows passengers to clear US customs while still in Canada. This is seen to be more expedient because passengers can avoid long line-ups at customs in the US, and they can also travel to US domestic airports that do not have customs facilities. The US benefits in that it can prevent passengers who might claim asylum, or who otherwise might be deemed to be risky, from ever reaching US soil. The result is a border with often different and shifting jurisdictional authorities. Enclaves are being created within Canadian territory where US authority regarding migration is enforced by US border agents who now have the right to bear arms, to strip search passengers, and to detain them indefinitely. Yet, while Canadian laws are meant to prevail (e.g. the Charter), the legislation explicitly states that the US border officers stationed in Canada will not be subject to any judicial review in that country.

The focused attention on the US’s draconian border practices is well warranted, from Trump’s promises to build a wall at the southern border, to the detention of migrant children and their separation from their families. Yet some of the most harmful aspects of the reconfiguration of contemporary borders are less spectacular and are being enacted through new legislation that both limits rights-claims and legal accountability. Notably, these measures are not just undertaken by the US, but require the quiet complicity of its partners, such as Canada.