Russian-Turkish relations have deteriorated sharply in the aftermath of Turkey shooting down a Russian aircraft in November. In a piece that will be of interest to US readers because of Turkey’s NATO membership and US involvement in the region, Didem Buhari-Gulmez assesses how the situation is likely to develop in the coming months. She writes that there is little consensus over what the lasting implications will be for relations between the two countries, with both Vladimir Putin and Recep Tayyip Erdoğan showing no signs of backing down from their war of words.

The shooting down of the Russian Su-24 bomber by a Turkish F-16 combat aircraft on 24 November represents a historical turning point in Turkish-Russian relations. The act, which took place right after the G-20 meeting in Antalya where disagreements over the ongoing war in Syria were already visible, was immediately denounced by Vladimir Putin as a “stab in the back by the accomplices of terrorists”.

While Russia has supported Syria’s President Bashar al-Assad by actively striking against the latter’s opponents, the western alliance is presently facing a serious dilemma over its response to the crisis in the country. The Paris attacks and the refugee crisis have convinced many in the West to prioritise the fight against Islamic State. Yet Turkey faces a much greater dilemma because as an immediate neighbour, it is directly exposed to terrorist attacks, refugee flows and the economic and social crises emanating from Syria.

Under Recep Tayyip Erdoğan’s rule, Turkey has openly advocated the end of Assad’s rule ever since the Syrian protests began in 2011. Turkey subsequently opened its borders to refugees with the anticipation that the Syrian conflict would be short-lived. Erdoğan’s resolute opposition to the Assad administration was one reason underpinning the rise of allegations that the Turkish government (allegedly endorsed by the US) was training and financing Syrian rebel groups like the al-Nusra Front, who later joined the radical Islamist camp.

According to some critics, the Turkish government has dragged its feet in the fight against Islamic State because it considers the Kurdish insurgency to be a more imminent threat. Consequently, Turkey’s position in Syria remains ambiguous and contested. Turkey’s ambition to become a “regional leader with global impact” has also raised questions over whether the country is replacing its traditional western-oriented foreign policy with a more autonomous policy in favour of representing non-western ‘underdog nations’ (especially in former Ottoman territories).

Erdoğan’s close dialogue with Putin over the last decade, and particularly his request that Russia endorse Turkey’s membership of the Shanghai Cooperation Organisation, have been considered part of Turkey’s strategy to diversify its alliances. Even the Crimean Tatar problem related to Russia’s annexation of Crimea did not cause serious tension in Turkish-Russian relations. However, both the publication by Syrian rebels of video footage of the late Russian pilot and the surviving Russian pilot’s allegation that Turkey had downed the jet without any warning (rejected by Turkish authorities and western pilots) have increased Russia’s sense of resentment.

Russia has since resorted to sanctions against Turkish citizens, including businessmen, academics, sportsmen, truck drivers, captains of ships and other individuals, denying them entry into Russian territory or revoking their residence permits. The Russian government has also officially called back Russian nationals residing in Turkey. Bilateral relations have been suspended in many sectors, including those related to the economy and the military, while even Russia’s gas exports to Turkey have come under threat.

Furthermore, the Russian media has accused Erdoğan and his entourage of supporting Islamic State in return for Syrian oil. The Turkish government’s response has been to accuse Russia of spreading propaganda against the country and bombing Turkmen rebels in Syria: a predominantly Sunni Muslim minority seen by Turks as sharing their heritage and identity. On 3-4 December, the Turkish foreign minister met his Russian counterpart for the first time after the downing of the Russian jet and was told that the incident had changed the course of Russian-Turkish relations for good.

The diversity of reactions in Turkey towards what is now being termed the ‘Russian crisis’ reflects the political polarisation in the country. Turkey is divided between those who think that the downing of the Russian jet was a legitimate act of self-defence, and those who blame the Turkish government for unnecessarily resorting to aggressive policies that have already cost the country its diplomatic and economic relations with many neighbouring states (including Egypt, Iraq, Israel). The latter camp emphasises that the historical airspace dispute between Turkey and Greece did not automatically lead to the downing of Greek jets. They hence believe that the airspace violation was just a pretext for Turkey to go back to its hard-line foreign policy of the 1990s, which was built on issuing ‘casus belli’ threats.

The future of Russian-Turkish relations?

There is little consensus on what the lasting implications of the jet crisis will be on Russian-Turkish relations. An optimistic view would be that the Russian jet incident will not escalate into a serious conflict because of the well-established economic, social and cultural interdependences between Turkey and Russia. Viewed from this perspective, the recent exchange of threats between the two countries is largely rhetorical and temporary.

A slightly less optimistic analysis would be that Russian sanctions against Turkey, including the suspension of natural gas supply and energy projects (such as the Akkuyu Nuclear Power Plant and the TurkStream gas pipeline), may lead to Turkey finding alternative partners like Qatar to bypass Russia’s actions. It may also encourage Turkey to reciprocate by imposing sanctions on Russia and Russian nationals in Turkey. However, this perspective would perhaps underestimate Russia’s capabilities and the extent to which Turkey is dependent on imports of Russian gas, which account for about 60 per cent of the country’s gas requirements.

The most pessimistic interpretation, of course, would be that a further conflict between Russia and Turkey may be imminent and that it could even result in a world war. From a longue durée perspective, the recent crisis is often seen as a symptom rather than a cause, implying that the deterioration of Russian-Turkish relations is inevitable due to a clash of geostrategic interests between two rising powers, Russia and pro-Western Turkey. This view holds Russia as primarily responsible for the deterioration of Turko-Russian relations by emphasising historical Russian claims over the straits and the Mediterranean – which had reinforced Turkey’s orientation towards the West after WWII – and Russia’s ethno-nationalistic foreign policy activism observed in, for example, Georgia and Ukraine.

Alternatively, a similarly pessimistic approach holds Turkey responsible for the conflict and claims that Turkey is becoming alienated from the West because of its reckless policies, often perceived as expressing sectarian interests. Accordingly, Turkey may lose the NATO security guarantees it enjoys and find itself isolated in an international community that seeks to avoid direct confrontation with Russia at all costs. So far, the more optimistic standpoints have prevailed in Turkey’s official rhetoric. Whether they overestimate the capability of Erdoğan’s Turkey to peacefully deal with Putin’s Russia remains to be seen.

The author would like to thank Seckin Baris Gulmez for his helpful feedback.

Posted In: Didem Buhari-Gulmez | US foreign affairs and the North American neighbourhood 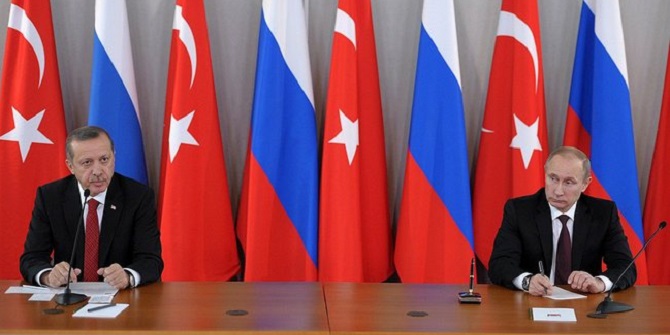