In US presidential elections, the winner is determined not by who wins the most votes nationwide, but by who wins a majority in the Electoral College, with every state having an elector for each of the state’s US House and Senate seats. In the wake of a number of elections in recent years which have seen the winner of the popular vote lose in the Electoral College, the institution now faces criticism and calls for its elimination. Julia Azari dispels some common misconceptions about the Electoral College’s original purpose and current problems, and looks at how it may be magnifying many of the political problems we now face.

Critics of the Electoral College claim that it is undemocratic and antiquated. Defenders argue that it forces candidates to campaign nationally, and protects the interests of rural Americans. And the fight has recently become a partisan issue. Presidential candidate Elizabeth Warren has called for the elimination of the institution. In an analysis of what might happen in 2020, the New York Times’ Nate Cohn writes that, “It is even possible that Mr. Trump could win while losing the national vote by as much as five percentage points.” (Although even Trump himself criticized the Electoral College as undemocratic in 2012.) Using the Electoral College to select presidents has major consequences for politics. They’re just not the ones that people usually think of.

It’s not that the Founders hated democracy, exactly

The first among these myths is that the Electoral College was designed because the Founders distrusted popular democracy. First, ideas and attitudes among those in attendance at the Constitutional convention were decidedly mixed. Some were more open to popular visions of democracy, others less so. Accounts from the convention suggest that the real concern was the impossibility of a national election in the late 18th century. Without mass communication and transportation, how could voters do anything other than vote for candidates they already knew – probably local “favorite sons?” This system would give an advantage to the larger states. Furthermore, as Texas A&M’s George Edwards has pointed out, it was the representatives of slave states who feared losing out under a popular vote system. The result was a complicated institution that gave each state the voting power of its Senators (two each) as well as its Representatives (allocated by population), allowing each state to decide how electors would be chosen. So while the Electoral College isn’t exactly supposed to save us from ourselves and our weakness for demagogues, its original purpose was even more troubling by contemporary standards.

Finally, a criticism raised against the Electoral College is that it benefits small states over larger ones. It’s true that if you divide up the voters per Electoral College vote, a voter in Montana (population 1 million, 3 electoral votes) has more influence than one in California (population 39 million, 55 electoral votes). But that’s a fairly abstract way of looking at the problem. In a new book, Representation and The Electoral College, Robert Alexander finds that it’s not small states that get real overrepresentation. Instead, Alexander finds that the nature of the system it establishes does shape the political geography of American campaigns. In 2000 and 2016, presidential candidates made the most visits to states that had a large number of Electoral College votes and were competitive – Florida, Michigan, Pennsylvania. These are states that have a high “tipping point index,” meaning they are likelier than others to decide the result. It is very likely that, under a different system, presidential candidates would allocate their time and resources differently, and that eliminating the “winner take all” counting method would lead to entirely different parts of the country attaining this pivotal status. 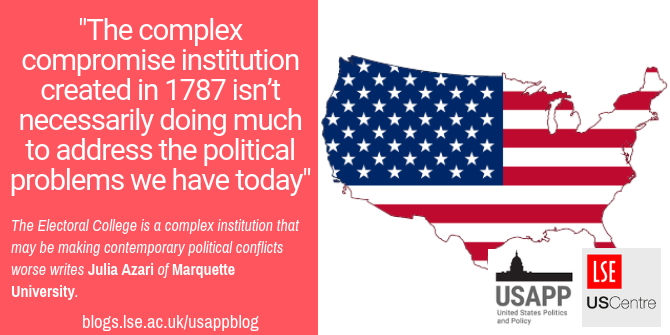 In addition to changing the way that presidential candidates campaign, the Electoral College almost always distorts the election result to some degree, even in the vast majority of cases where the winner of the popular vote also takes the most Electoral College votes. This means that candidates who win a plurality, like Bill Clinton in 1992 and 1996, can boast an Electoral College landslide, complete with the visual effects of the map. Even more dramatic was the result of 1980, in which Ronald Reagan won 50.8 percent of the popular vote, but over 90 percent of the Electoral College. The impression of a landslide election – either through the visual image of a map dominated by red or blue, or the general sense that one candidate never really had a chance – can make a lasting difference in how people perceive an election outcome.

But perhaps the most measurable and dramatic impact is that sometimes it reverses the popular vote. This has happened only rarely, and under a variety of conditions. In 1888 and 2000, razor thin margins made a reversal of the popular vote possible.

The 1876 election combined a close margin with the troubled aftermath of the Civil War, in which efforts to extend the franchise to African Americans living in the South were met with violent resistance. These accusations of voter suppression and voter irregularity informed the eventual struggle over how to allocate the Electoral College votes from Florida, South Carolina, and Louisiana. The eventual creation of a commission to decide the election, and the agreement by Democrats to accept the election results in return for the end of Reconstruction all added up to an election whose problems went far beyond the Electoral College. But the Republican candidate, Rutherford B. Hayes, ended up become president despite winning 200,000 fewer votes than the Democrat, Samuel Tilden.

The 2016 result differs from previous ones in important ways: while it was a relatively close election beset by some irregularities (Russian interference, unpopular party nominees, concerns about the first presidential election without section 5 of the Voting Rights Act), it was neither a tie nor a contested result that was resolved by the Electoral College. This has resulted in more questions about the institution, and some growth of the national popular vote movement, a compact among states to cast their electoral votes for the national popular vote winner.

In the past, the Electoral College has provided a clear result under troubled circumstances, enhanced the appearance of a decisive victory for the eventual winner, and rarely overtly distorted the will of the electorate. It has also shaped how candidates campaign, turned the focus of elections to a limited number of competitive states, and twice in the past two decades, awarded the presidency to the candidate who came in second place in the popular vote. In other words, the complex compromise institution created in 1787 isn’t necessarily doing much to address the political problems we have today. And when it comes to the legitimacy of our institutions and the intensity of political conflict, it might be making them worse.