To say that 2020 has been an eventful year is an understatement. A global pandemic, national uprisings against racial injustice, an economic collapse – these are just the major items. It’s easy to forget that earlier this year, President Trump survived an impeachment trial. Below, Julia Azari explores how this has affected the 2020 election. She argues it appears to have damaged his standing as an individual and made him even more reliant on the Republican Party, thus giving him less influence in shaping the response to the COVID-19 pandemic and reducing his political capital in an election year.

It’s difficult to know exactly how his impeachment this past February has affected Trump’s chances for reelection, for a few reasons. One, of course, is all the intervening events. Does anyone even remember impeachment anymore? Second, we don’t have much past precedent to go on. Trump is only the third president to go through the whole impeachment process, and the first to run for reelection after being acquitted. Andrew Johnson wasn’t renominated in 1868, and Democrat Bill Clinton was term-limited in 2000.

There’s also the question of whether, well, anything matters in the current political environment? Trump’s approval ratings have been incredibly stable throughout his presidency, first surprisingly low for a strong economy, and then surprisingly resilient through the catastrophes of 2020. The depth and negativity of partisanship seem to hold Trump’s ratings in place, with little to persuade Republicans to turn on him, or Democrats to warm to him. The Lincoln Project, a group of anti-Trump Republicans supporting the Biden campaign, has released an ad featuring the family of Lieutenant Colonel Alex Vindman discussing how the family was threatened and targeted after Vindman testified in the impeachment trial. But scholars disagree on how much advertisements like this matter. 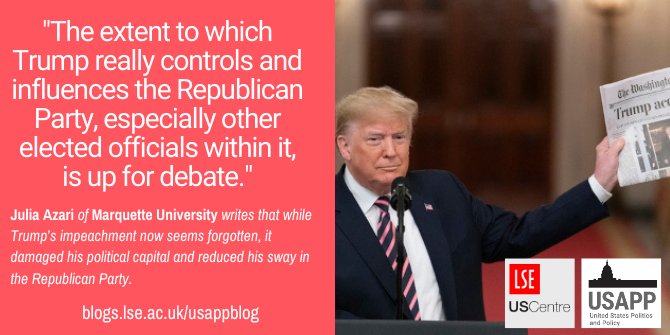 Nevertheless, the key to looking at how impeachment has affected Trump’s fate in the 2020 election may be in its impact on his relationship with his party. In 2016, Trump was nominated under unusual circumstances, with most well-known party elites opposing him. He proved far more popular with primary voters, though rarely winning majorities in any primaries until after Super Tuesday, when Florida Senator Marco Rubio left the race. Most party leaders eventually embraced the party’s nominee, though there were notable holdouts like 2012 Republican presidential nominee Mitt Romney, Arizona Senator John McCain and the most prominent members of the Bush family. Throughout the 2016 general election season, however, the normal partisan dynamics seemed to kick in. Once Trump won the nomination, it seemed that the Republican Party was his.

But the extent to which Trump really controls and influences the Republican Party, especially other elected officials within it, is up for debate. The Republican Party has become more like Trump in some ways – shifting positions on trade and immigration, for example. However, there’s also an argument to be made that Trump has been shaped by the GOP. Political scientist Matt Glassman points out that Congressional Republicans have used their agenda-setting powers to respond to Trump positions they don’t like (such as reducing defense spending). Matt Grossmann and David Hopkins point out Trump’s proposals that broke with conservative orthodoxy on government spending have fallen by the wayside, and instead his administration has embraced a tax-cutting and deregulation agenda in line with the party’s traditional priorities. In other words, there’s not much evidence that the president has been able to move Congressional Republicans to the center on economic issues, even though those stated positions were part of his 2016 campaign.

These struggles aren’t surprising. Getting people to change issue positions in politics is always a heavy lift.

This is where we get into the question of how impeachment matters. On the one hand, Trump has never been very popular, despite receiving high marks from Republican voters. But the impeachment may have damaged him anyway, even if in a limited fashion. Political scientists are sometimes skeptical of the idea of political capital, but it makes sense as a way to describe Trump’s relative standing in his party and the polity at large. Research suggests that it matters at least under some conditions, and shows that the president’s approval relative to the rest of the political system can affect his (or, theoretically, her) influence over politics and policy. So let’s look at the ways in which impeachment might have damaged Trump’s political capital.

First, the impeachment appears to have damaged Trump’s standing as an individual. A February 2020 Pew Survey, taken just after the conclusion of the impeachment process, showed that while Republicans agreed with Trump on issues, only 31 percent liked his conduct as an individual (down slightly from 38 percent in 2018). The impeachment trial resulted in a narrow majority supporting the president’s removal from office. This didn’t happen, but these numbers suggest important constraints on Trump’s power.

Most obviously, Trump doesn’t have much of a cushion of support among Independents or Democrats – he’s incredibly reliant on support from his party. And that support seems to be largely driven by his ability to articulate standard Republican issue positions – the president himself is more of a liability. It’s important to note this in the context of the impeachment vote. The acquittal votes by all but one Senate Republican were widely seen as an example of his control over the party. Yet, partisan impeachment votes have been the historical norm. And they mean that the president owes his political life to these Senators, not the other way around. They don’t indicate that Republican Senators will shift to the president’s side when he disagrees with existing party positions.

The events of 2020 have highlighted how this difference might matter. The COVID-19 pandemic has created increased demand for government response; early on, support for economic relief from the government was much higher than in the 2009 financial crisis. As the election approaches, Americans are still anxious about both the virus and the economy. Yet talks on the relief bill have stalled, in part because Congressional Republicans are reluctant to support the spending in either the White House version or the version from the Democratically controlled House of Representatives.

Would a more popular president Trump be able to persuade conservative Senators to move leftward on economic relief? We’ll never know for sure, but it seems like a stronger reputation would have given him a better chance to champion such measures, and if he truly controlled the Republican Party, he would have more influence in this area. The impeachment trial didn’t create this problem for the president – he came in with elite skepticism and low public approval ratings – but the evidence suggests it didn’t help. It seems like the crises of 2020 should have overshadowed impeachment as a potential liability for Trump’s reelection campaign – but instead, it may have magnified the problems. Trump’s complicated relationship with the Republican Party might have been sustainable in a more tranquil year. Instead, the unusual circumstances have placed new strain on this difficult balance, and highlighted the difference between elite Republicans and the balance of public opinion on some issues. This is the kind of difference that presidents are sometimes positioned to address, but only if they have the political standing to do so.