This year has seen a number of mass shootings and attacks by those who are hostile to immigrants because of fears about racial and ethnic change. In a new study, Joseph E. Uscinski and Casey Klofstad find that many Americans are concerned about Whites becoming a minority in the next three decades, and that their views on immigrants also predict how they feel about demographic change. For a very small minority, they write, these fears may be fuelling racially-motivated violence.

The recent series of shootings and attempted bombings across the globe show how fears about racial and ethnic change can motivate violence. In El Paso, a gunman killed twenty-two and injured twenty-four others. He appears to have been motivated by the belief that there is an active plot to exterminate White people. The gunman, who killed 51 at two mosques in New Zealand in March 2019, was driven by a similar narrative. An attacker killed eleven at a Pittsburgh synagogue in October, 2018 based on the belief that Central American refugees were “hostile invaders” who wanted to slaughter “his people”. In August, a man shot and injured one and attempted to kill others at a mosque in Norway; he was inspired by previous acts of violence, and thought he was facing an imminent “race war threat.”

These acts of violence appear motivated by an extremely negative view of immigration and demographic change; this view is that immigrants are part of a malevolent plot to replace whites. These views aside, the United States is undergoing a demographic transformation with, according to the US Census, whites expected to become a minority within the next thirty years (although we should remember that definitions matter, too). To examine Americans’ attitudes towards this shift, we surveyed a representative sample of 2,000 Americans from July 23 to August 6. This survey is part of a research project on extremist conspiracy theories funded by the University of Miami Laboratory of Integrative Knowledge program. Our survey was administered online by Qualtrics, and was representative of US adults in terms of gender, race, education, and income.

Here is what we learned:

To gauge attitudes on demographic change in the Unites States, we asked our respondents how much they agreed or disagreed with the following statement: “Minorities overtaking whites as the majority of the US population by 2050 will be good for the country.” We found that while most Americans (48 percent) neither agree nor disagree with this statement, 28 percent “disagree” or “strongly disagree.” For comparison, 24 percent of our respondents “agreed” or “strongly agreed” with the statement. 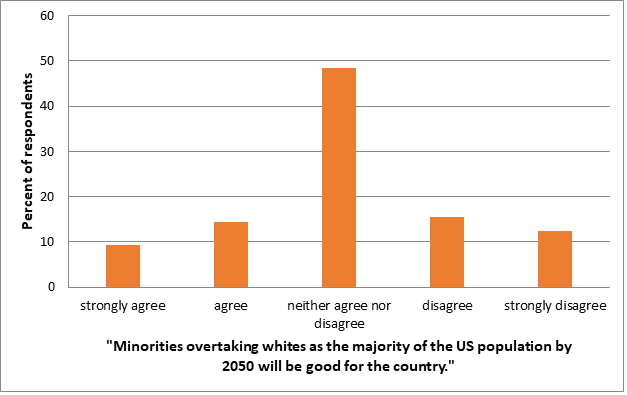 Partisan identities are highly predictive of how Americans view sociopolitical issues, including demographic change. For example, our survey shows that self-identified Democrats were less likely to respond negatively to the statement “Minorities overtaking whites as the majority of the US population by 2050 will be good for the country.” Only 18 percent of Democrats disagreed with this statement, while nearly a majority – 46 percent – of Republicans did. 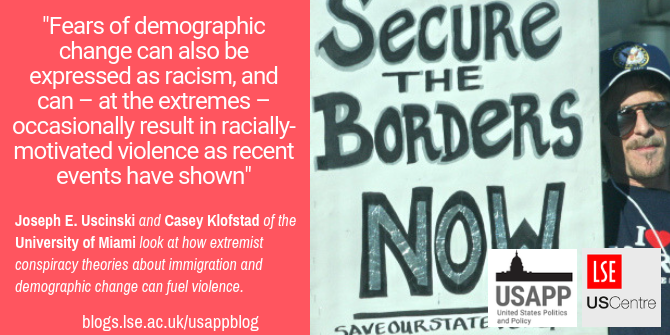 “Immigration Protest” by Travis Wise is licensed under CC BY 2.0

Social media does not appear to drive views on demographic change

Politicians and the mass media have focused on social media as a “cause” of racism and mass shootings in recent weeks. In particular, Twitter and 8Chan have been accused of incubating extremist views and motivating real life violence. As such, our survey allows us to examine if social media use was related to views on demographic change.

Our respondents reported how frequently they use Facebook, Twitter, Instagram, Reddit, and 4Chan/8Chan. In looking at the relationship between self-reported use of these various modes of social media and attitudes toward demographic change, we find that frequent social media users are actually less negative toward the advent of whites becoming a minority in the United States. However, we find that this relationship between social media use and acceptance of white replacement is largely driven by age: younger people are both more likely to use social media and are more likely to be accepting of demographic change.

None of this is to say that social media is harmless, but rather to say that that the messages matter more than the medium. When political elites (e.g., those that attract large audiences on and off social media) traffic in xenophobic rhetoric, conspiracy theories, and scapegoating, millions will hear it and some may act on it.

Do views towards the coming demographic shift matter?

Numerous studies have shown that how the pending demographic shift in the United States is framed can instill feelings of status threat in White Americans, making them more accepting of policies and politicians that pledge to curtail or altogether stop immigration. Fears of demographic change can also be expressed as racism, and can – at the extremes – occasionally result in racially-motivated violence as recent events have shown.

Other polls also show that many Americans have skeptical views on immigration. For example, a study I co-authored in 2018 showed that 55 percent of Americans believed that the government was concealing “the true cost of immigration to taxpayers and society.” Likewise, 40 percent believed that, “In the last 20 years, the US Government has deliberately tried to make American society more ethnically diverse through its immigration policy.”

Such beliefs suggest that there is a strong and ingrained skepticism of immigration and of governments’ role in it among many Americans. For a very small minority of this group, dim views of coming demographic change and concerns about immigration policies and immigrants themselves, combined with the easy spread of global hate groups and access to guns can metastasize into often-deadly violence.

There are no quick and easy fixes at the national level to address this; however, we the media could change the way we frame demographic change, focusing on the positive benefits of immigration. Americans could attempt to redefine immigration as one of the prime benefits of living in a free society. And, political elites – especially the president – could engage in a more civil discourse on immigration. Failure to address the root causes of this violence will mean that we will continue to face the threat of extremists who may one day be motivated to commit violence.