House Speaker Nancy Pelosi’s decision last month to launch a formal impeachment inquiry into President Donald Trump has fueled debate over whether the move will ultimately help or hurt the Democratic Party. Thomas Gift explores how their strategy over the upcoming weeks will shape the politics of impeachment. He argues that, to prevent the impeachment inquiry from backfiring, Democrats must: stay on message (by keeping the focus on specific acts of wrongdoing by the president regarding Ukraine); and act swiftly (by not getting bogged down in investigations that will stall their political momentum).

Since launching an impeachment inquiry into Donald Trump on September 24th, experts have debated whether the move was a savvy political act for Nancy Pelosi—or one that will come back to haunt her. For example, conservative pundit and FoxNews host Tucker Carlson argued that “to lesser political minds like mine, it’s hard to see why [Democrats are]… doing this.” Liberal commentator and Next Left host John Nichols, however, claimed that “[i]mpeachment…comes with a political equation, and that equation does not add up to good news for our embattled president.”

Even as concerning details have emerged that Trump tried to work with the Australian prime minister to discredit the Mueller probe over Russian meddling in the 2016 US election, the impeachment inquiry will continue to lead to second-guessing. So which side is right? Ultimately, the answer will depend less on whether pursuing impeachment made sense at the time—and more on how Democrats navigate the political landmines of Washington over the next several weeks. Two factors for the Democrats are key: First, will they stay on message? Second, will they act swiftly?

Impeachment, when it’s all said and done, is about articulating very specific articles of wrongdoing by the president. It’s not about enumerating a broad litany of grievances against the executive. To be sure, there’s plenty of dirty laundry that Democrats could air to shame Trump and label him unfit to be president. From the Russia investigation to his repeated lying in the Oval Office, Trump has done much that Democrats find detestable. For the impeachment inquiry to succeed, however, they’ll need to resist the temptation to make the process a referendum on his presidency overall. 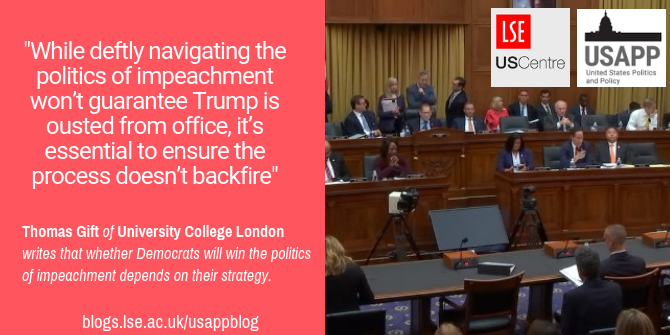 Although new revelations could change this calculus, right now the case for impeachment still needs to focus on Trump’s July 25th phone conversation with Ukraine President Volodymyr Zelensky, as well as the alleged cover up. The narrative needs to be easy to understand and grounded in facts. Here’s the line: The president wrongfully used his power to try to compel a foreign nation to investigate a political opponent. The White House then took steps to hide the conversation in a codeword level system designed to safeguard sensitive national security information. That’s wrong. End of story.

Investigations into Trump have been underway for virtually his entire presidency. There’s good reason for this protracted oversight, given the number of accusations lodged against him. Yet with impeachment, timing is critical. The Democrats currently have the momentum. But momentum can stall. The House Judiciary Committee, which decides whether the full House of Representatives will vote on impeachment, should set a clear timetable for investigations. Democratic leaders can encourage other committees to conduct their own probes into Trump. But they should set a deadline—with no extensions.

If recent history is any indication, Trump will doubtlessly try to frustrate impeachment investigations by refusing to give up information and failing to respond to subpoenas. At some point, Democrats may need to accept this stonewalling and go with the evidence they have. The longer the Democrats drag on the impeachment inquiry, the less the American public will pay attention—and the greater the chance they’ll lose control of their message. For Democrats, the goal of the inquiry should be to uncover the truth. It shouldn’t be hurried, but it also shouldn’t be needlessly drawn out.

Impeachment is inherently risky for the Democrats. If it weren’t, Nancy Pelosi would’ve gone down that path long ago. If Democrats handle the impeachment inquiry well, they can rally a vote against Trump in the House and energize their base going into the 2020 election. But if Pelosi and her colleagues bungle the process, they can give Trump a coveted victory and allow the president to smear their party as leading “another witch hunt.” While deftly navigating the politics of impeachment won’t guarantee Trump is ousted from office, it’s essential to ensure the process doesn’t backfire.