In new research, Rakib Ehsan found that Britain’s young Eurosceptics were more likely to be male when compared to their pro-Remain peers. He explores these emerging gender-based differences in political affiliation and vote choice, on both sides of the Atlantic.

In recent times, the UK and the US have both experienced fundamental shocks to their democratic systems. In 2016, egg was left on the faces of many a political commentator: defying the predictions of many pollsters, shocking much of the mainstream media, and sending many academics in a tailspin, the UK voted to leave the European Union (EU) in June 2016; and then, that November, businessman and reality TV star Donald Trump stunned the world by defeating Hillary Clinton in the US Presidential Election.

Unsurprisingly, these political surprises have generated a wealth of research and considerable amounts of media commentary. Much of this provide economics-related explanations for Brexit and Trump. The prevailing narrative is that these seismic events were driven by political backlashes in largely deindustrialised “left behind” regions such as the North of England and the American Rust Belt. It was abandoned working-class communities which have struggled to cope with the winds of globalisation, that delivered both the Brexit result and Trump’s ascendancy to the White House.

While the economics-based “winners and losers of globalisation” thesis holds some relevance in the context of Brexit and Trump, other socio-cultural factors are important. Framing of national identity, sense of place and belonging, the “cosmopolitan vs. provincial” divide on issues such as immigration and cultural diversity, and prioritisation of post-materialist concerns such as environmental protection, also fed into voting patterns for both cases. But an underdiscussed topic is how gender fits into the picture.

Analysis for my recent report published by the Henry Jackson Society, which explored young people’s attitudes towards EU membership shortly before the June 2016 referendum, delivered a particularly interesting finding relating to gender. While the pro-Remain subgroup was almost divided evenly by gender composition (49.9 percent male; 50.1 percent female), the pro-Leave subgroup was considerably lopsided (64 percent male; 36 percent female) – a gap of 28 percentage points (see Figure 1 below). Importantly, my analysis showed significant gender differences even after controlling for a range of socio-demographic characteristics and socio-cultural attitudes. 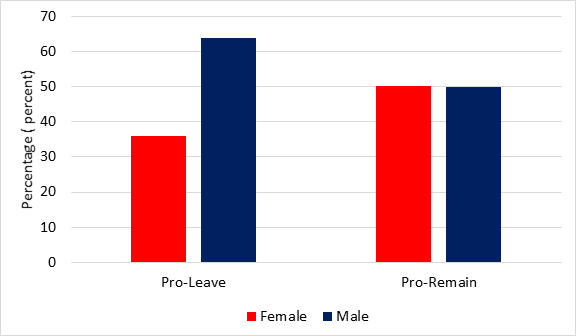 This central gender-related finding – that young pro-Leave people were far more likely to be male than their pro-Remain peers – means it is part of a burgeoning strand of political science research which emphasises the role of gender in contemporary electoral behaviour. The UK is not unique in this respect, with similar patterns emerging across the pond. In the 2016 United States Presidential Election won by President Donald Trump, 63 percent of women under the age of 30 voted for Democratic presidential candidate Hilary Clinton; the corresponding figure for men under the age of 30 was 47 percent – a gap of 16 percentage points. This gender difference in Democratic Party support among younger American voters was larger than the gap in both the 2008 and 2012 Presidential Elections.

This gives rise to the question of whether we are witnessing a “genderisation” of modern British and American politics. And if so, what is potentially driving these developments? 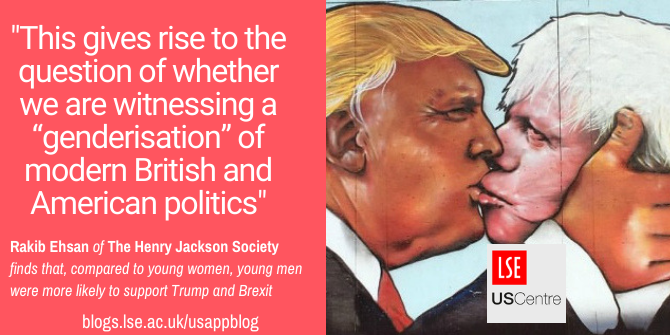 “Just about says it all regarding my feelings about both Trump and Brexit, all in a single poster” by Chris Herbert is licensed under CC BY NC SA 2.0

Are young males on both sides of the Atlantic more likely to be political “risk takers” when compared to their young female counterparts?  There is a body of scholarly literature which suggests that young males traditionally demonstrate more “assertive” and “risk-oriented” behaviours, when compared to their female counterparts (though there is research-based push-back to this view). The choice to remain in the UK’s June 2016 vote on EU membership arguably represented the more “risk-averse” option; a continuation of the status quo supported by much of the political and business elite, as well as a wave of scholarly experts. The Remain campaign spoke of the language of “co-operation” and “togetherness” in respect of the EU, as well as emphasising the economic risks of leaving the EU (even though many of these forecasts have not materialised). The Leave option, on the other hand, represented a sharp break from the status quo and a dismissal of much of the advice offered by supposed “experts”. It also spoke of how the UK was mistreated within an organisation dominated by a Franco-German alliance, as well as characterised it as keeping afloat the “free-riding” net recipients of Eastern and Central Europe. Britain was supposedly being “mugged off” within an organisation where its voice was not being heard.

Transposing this logic on the 2016 US Presidential Election, there is no doubt that Democratic presidential nominee Hillary Clinton represented a fundamental continuation of the status quo. Indeed, she was the “establishment” candidate – a former First Lady, Senator, and Secretary of State. The classic “Washington insider”. President Trump, who had never held public office before his historic victory, was the anti-establishment candidate who was going to shake things up and drain the Washington swamp. Promising to rip up existing international agreements such as NAFTA, as well as pledging to take the fight to China and embracing the possibility of a fully-fledged trade war, Trump’s proposed agenda was based on a vision of an assertive America led by an unconventional “strongman” – one that was not going to allow European nations to “free-ride” when it came to the NATO budget, be a soft touch on China’s dumping practices which harmed America’s manufacturing sector, and supposedly force Mexico – a sovereign nation-state – to use Mexican-generated taxes to build a wall on the border they share.

All of this gives rise to some important questions, especially in the Atlantic context. Does a more “territorial” and “protective” politics – a political agenda based on “national pride”, traditional understandings of sovereignty, stricter control of immigration, and enhanced border security – naturally appeal more to young men, when compared to their female counterparts? Are young men inherently more “tribal” and “ego-sensitive” – do the “take back control” and “don’t take us for a mug” narratives naturally resonate more with them?

If these gender differences in vote choice continue to persist, they have the potential to impact on the democratic politics and policy debates in both the UK and the US, for some time to come.

Rakib Ehsan – Henry Jackson Society
Dr Rakib Ehsan is a research fellow at the London-based think-tank the Henry Jackson Society, sitting in the Centre of Social and Political Risk. His PhD, obtained from Royal Holloway, University of London, explored differences in socio-political behaviour and attitudes between British non-white ethnic minorities.